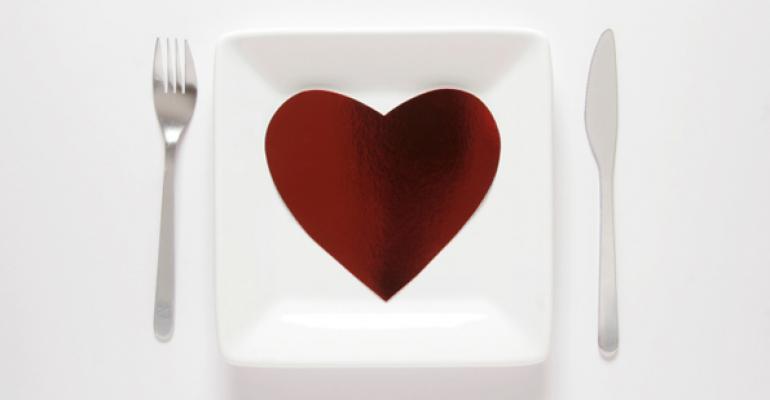 NRN editor and restaurant marketing expert Jennings breaks down what you should be watching in the industry this week. Connect with her on the latest marketing trends and news at @livetodineout and [email protected].

Valentine’s Day falls on the Saturday of a three-day weekend this year, offering restaurants an opportunity to stretch a perennially big date night.

From a marketing standpoint, Valentine’s Day has become a two-week affair, with deals and offers leading up to the weekend, and even throughout the month. For most restaurants, it is a weekend of prix fixe menus. Chains are taking the same approach, but adding social media elements to promote their deals.

California Pizza Kitchen is offering a “Sweet Deal for 2,” with two entrées and a dessert for $32. On Facebook, Twitter and Instagram, the chain is offering a “What We Do For Love” sweepstakes that invites followers to share photos showing the crazy things they do for love, with the hashtag #CPKLoveSweeps. The winner could receive free California Pizza Kitchen menu items for a year.


Starbucks is kicking off the holiday on Feb. 13, with the World’s Largest Starbucks Date. Since so many members of Match.com list “coffee and conversation” as one of their interests, the coffeehouse chain is inviting members to arrange their first dates that day using a new “meet at Starbucks” feature on the dating website.

Special menu pairings, such as a Caffe Verona coffee press for two and a Double Chocolate Chunk Brownie, will be available for $5. Customers are encouraged to share their experiences on social media with the hashtag #StarbucksDate.

“There’s no better time to celebrate meaningful moments of connection and encourage new ones than during Valentine’s Day,” said Sharon Rothstein, Starbucks’ global chief marketing officer. “For more than 40 years, Starbucks has been a place to connect over a great cup of coffee.”

TGI Fridays is holding a Twitter sweepstakes that asks followers to share stories of how they met at one of its restaurants, with the hashtag #MyFridaysValentine. Daily winners could receive a $50 gift card for a date at a TGI Fridays, and one grand prize winner will receive a weekend getaway for two to Paris.


Dairy Queen is looking to raise the romance level with less cliché gifts. Rather than silly flowers (yawn) or jewelry (please), DQ suggests a heart-shaped Red Velvet Cake and a one-of-a-kind red spoon, which comes in a velvet jewelry box to make it extra classy.

On social media channels, DQ will release data on V-Day gifts with the hashtag #breakthecliche.


Perhaps more than anything else, it is a season for adorable food. Vancouver, Wash.-based Papa Murphy’s Take ’N’ Bake will offer heart-shaped pizzas as part of its annual tradition.

Los Angeles-based Zpizza will also make heart-shaped pies either baked in their brick ovens or as a take-and-bake option. Chicago’s Connie’s Pizza is offering heart-shaped pizzas all month, with some proceeds going to the American Heart Association.

Krispy Kreme is offering Hugs, Kisses and Hearts doughnuts, as well as the unbearably cute Luv Bug ladybug version, available in the U.S. and Canada through Feb. 15.

With the doughnuts and sweet lattes also comes a revived Twitter sweepstakes, from Feb. 11-13. Followers are invited to tweet a message to their loved one using the hashtags #DDHearts and #sweeps.

Up to 10 participants will receive a $100 mobile gift payment and have their tweet turned into a special dedication video they can send to their Valentine. The video will feature a personalized heart-shaped doughnut created by Rick Golden, Dunkin’s Manager of Donut Excellence. One grand prize winner will receive two JetBlue travel certificates.

Rockville, Md.-based California Tortilla is marking Valentine’s Day early, on Feb. 12. For one day only, while supplies last, the chain is offering “Love Chips,” cinnamon-sugar-dusted tortilla chips served with a side of Nutella for dipping. And to show the love, the chips are free with any purchase.

Qdoba Mexican Grill is also bringing back a buy-one-get-one offer on Valentine’s Day. Customers who order a smothered burrito and smooch someone at the restaurant could get a second smothered burrito for free on the same visit.

And, of course, McDonald’s well-publicized Pay with Lovin’ campaign continues through Valentine’s Day. Customers are being picked at random to earn a free meal with an act of love.

Mercifully, restaurant chains have kept references to the recently released movie “Fifty Shades of Grey” to a minimum, except for Sullivan’s Steakhouse, which is offering a three-course menu that highlights aphrodisiacs, according to the Chicago Tribune. Sullivan’s is operated by Southlake, Texas-based Del Frisco’s Restaurant Group.

The meal comes with an optional blindfold — a silver tie perhaps — with the idea that eating blind will heighten other senses, such as touch and taste.

Presumably, diners can take the blindfold home. Any further references to the movie should be left to the imagination.