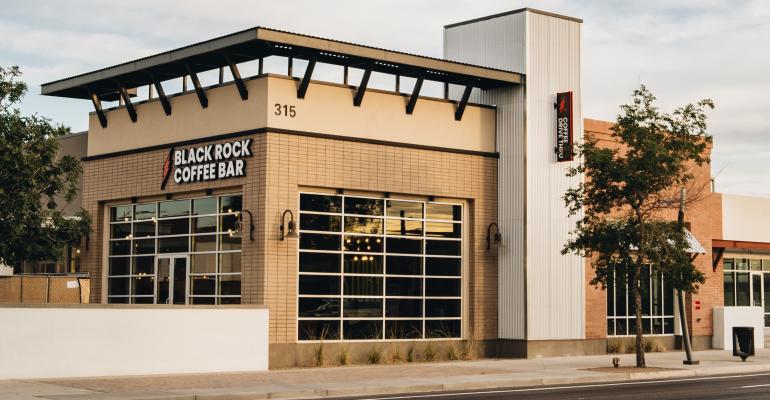 Black Rock survives by serving the community that became the quintessential 2021 consumer: the suburbanite.
Top 500 Restaurants>Snapshots of Success

Suburban locations were the restaurant’s saving grace during the pandemic

Founded in 2008 during the Great Recession, Black Rock has faced no shortage of hurdles in its short 15-year history. The Pacific Northwest brand also had some steep competition being in the country’s coffee mecca.

“Going through those two gauntlets really has helped us as we've expanded past our home market,” said Jeff Hernandez, CEO and founder of Black Rock Coffee Bar.

Those gauntlets — facing Pacific Northwest competitors like Starbucks and Dutch Bros and diving headfirst into The Great Recession — helped the brand prepare for eventual expansion into states like Arizona, Colorado, Idaho and Texas, and eventually for the operational challenges of the COVID pandemic.

The chain, however, is picking up steam. It opened 44 locations in its first 10 years, but in the last five, it’s more than doubled that amount to 110. The brand is growing by at least 25% in unit count year-over-year, according to the company, and grew same-store sales 16% year-over-year.

How does it do this? By serving the community that became the quintessential 2021 consumer: the suburbanite.

Much like how the daypart for coffee chains saw a change in daypart from 7-9 a.m. to a later 10 a.m. start for consumers getting coffee, there was also a shifting consumer base who moved out to the suburbs during the pandemic, no longer commuting to urban environments looking for local food. That’s where places like Black Rock, which had already invested in the suburbs, had a chance to shine.

“We are a suburban coffee shop, which is the way I would probably say we very much find our niche; we love to serve that nuclear family, that suburban family. We love to parachute into any community that we're going to serve,” he said.

Hernandez describes his team as “the four G’s” — grit, grace, growth and gratitude — while he describes the brand as being about “the three C’s”: coffee, connection and community.

Connectivity is “the place where the barista gets to know your name and really connects with you,” he said, “especially in an overly digitized world where everybody's only connecting over social media.”

One example of community was at a local shop where the team discovered a local teacher had passed away and the store held an “All Proceeds Day” for the family she left behind.

“I've always really struggled with how to answer how we are special; I think partly because of that founding in the downturn,” he said. “And again, in such a highly competitive market, it's always been a hard thing to say, because we never really had the luxury to ever rest on the laurels of being special.”

But he says that if he abides by the four pillars in all the stores — clean store; serve great, quality products; serve drinks with speed; and top notch, over-the-top service — then the stores are ripe for success. It also gives them more time to lean into other things each store is passionate about, like giving back to the community or connectivity.