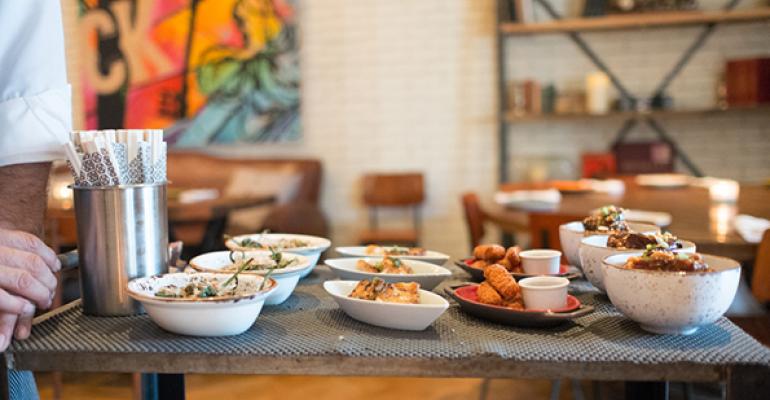 Customers at The Church Key, a bustling 180-seat restaurant in West Hollywood, Calif., are, like many Americans, busy multi-taskers.

“Everyone has their phone in their hand and they want everything now,” executive chef Steven Fretz said. Fortunately, with the restaurant’s unusual service style, customers can have a cocktail in their hand and a plate of pork ribs in front of them before they even meet their server.

On busy nights the restaurant has four runners pushing carts stacked with small plates of sushi, barbecue dishes, vegetarian items and cocktails in cans and bottles that guests can snack on or sip while reading the menu or finishing their text messages.

Welcome to the world of American dim sum.

Originally a midday meal from southern China, dim sum service involves carts of food being rolled through dining rooms for guests to see, pick and choose. The servers tally their orders and present them with a bill at the end of the meal. It’s fast, engaging and a great way to keep the dining room buzzing, according to restaurant operators who have adopted the style.

But it’s not easy. Anticipating how much food people are likely to eat, expediting it quickly and maintaining a steady pace of food without excessive waste can be a challenge.

“Until we figured it out, I would joke that we had the best fed dishwashers in the industry,” said Joey Ward, executive chef of Gunshow, a 52-seat restaurant in Atlanta with a similar dim sum service style model.

“It took a lot of tequila and a lot of food to figure it out,” said Fretz. He arrived at the idea with business partner Joseph Sabato when they saw the 8,000 square-foot space that would become The Church Key.

“The bar took up 40 percent of the restaurant, so we needed a high-profile bar, and we started talking about cocktail carts to make liquid nitrogen ‘Otter pops’ and canned cocktails, and bottled cocktails.”

Then it occurred to them that food could be served on those carts and would satisfy the give-me-food-now needs of the customers, who also can order from the à la carte menu.
“We never called it dim sum — that was the media,” Fretz said.

Chefs Stuart Brioza and Nicole Krasinski of State Bird Provisions in San Francisco also have a combination à la carte and dim sum style service, but they came about it differently.

“We wanted to cook with freedom and flexibility,” said Brioza, who while doing catering jobs with husband Krasinski found that their customers enjoyed large hors d’oeuvre parties with 10 to 15 items where the mood was casual but the food was still substantial.

When Brioza saw the State Bird Provisions space — a former pizzeria with the hood in the front of the restaurant — it begged for a casual approach, and “it answered that freedom and flexibility thing like crazy.”

Although State Bird, like The Church Key, has an à la carte menu, much of the action in the 20-table restaurant revolves around the dishes that Brioza, Krasinski and their team make based on great ingredients that they have available in limited quantities.

Many of the dim sum items are decided in advance, but the serving style allows the restaurant to send out a few things on a first come, first served basis.

“We can get six trout tails, sell them, and that’s it,” said Brioza, adding that approach helps them keep the menu reasonably priced, too. “You’re truly utilizing everything,” he said. “Those trout tails pay for the whole trout.”

“We don’t spend our night putting out fires. Everyone’s got food all the time,” he said.

Brioza said it took about a year to educate customers about the service style, and it took him awhile to manage it, and to figure out how much of what items to make.

“Now we know that garlic bread with burrata will be bought by 90 percent of tables,” said Brioza. That’s 18 tables at their 20-table restaurant. So he learned to start by sending out 12 orders to build up anticipation before sending out the remaining six.

It also takes a lot of staff, he said, noting that he has seven cook stations and six servers and a bartender on a busy night.

“Being busy helps,” he said.

Fretz said he learned that he can’t send out a full cart of food on slow Monday nights, so he had smaller carts built so they still looked full.

Although he said having carts rolling through the restaurant can help build check averages for smaller parties, it doesn’t necessarily work well for larger parties, who will split appetizers and entrées and then get a few dim sum plates.

“People see all that food and say, ‘Wow, we ordered a lot of food, we must be full,’” he said. But in reality, even with a cocktail, they might only spend about $40-$45 — a cheap night out in West Hollywood.

Sushi and sashimi sell particularly well as dim sum, Fretz said. So does barbecue, like the spare ribs that he smokes for 10 hours, then covers and steams them for an hour and finishes them on the grill, basting them constantly with a smoky barbecue sauce. He tops it with a fried brunoise of garlic and a mound of chopped green onions.

“I think the most important part is that they look good,” he said.

“The carts have to be pretty and organized,” he added, noting that they’re all themed, with one cart having sushi, another having barbecue and so on. They also serve as mobile server stations with extra silverware, napkins, share plates and so on.

Brioza said the flavors of the items also have to pop.

“I think about salt, fat, acid and texture,” he said. “There’s lot of competition and variety at the table,” he added, noting that since each item is only a few bites, those bites have to count.

At Gunshow in Atlanta, the style is more like a Brazilian churrascaria — where cooks carry out meat on spits that they carve tableside — than dim sum, although churrascarias tend to be all-you-can-eat and Gunshow items are à la carte.

Unlike at State Bird and Church Key, all of the items are printed on a menu, and are served by cooks.

Ward said the inspiration came from the way he and his friends like chef-owner Kevin Gillespie like to cook and eat.

“We wanted to have the dishes coming out when each individual dish was at its best,” Ward said. Instead of working to coordinate the doneness of fish and beef so they could be served together, “if you could just bring the dish out and offer it to people who wanted it when it was ready, it would be better, and that’s the way it is meant to be enjoyed,” he said.

Also, in the kitchen, each cook can focus on making one dish perfectly, serving it and then making other dishes.

The cooks generally make dishes they had a role in developing. Ward said they have creative development sessions each week to create the menu, and cooks bring different ideas that Ward helps them to develop, “so they actually have true ownership of the dishes.” That ownership helps during service since the chefs can tell the guests everything about the dish. “It can be inspired by their childhood memory. They can tell you about the farm the ingredients come from, and they have a big sense of pride,” Ward said.

“It gets people to tear down their boundaries and order something they wouldn’t necessarily order normally,” he said.

“Pretty much any pork dish that we put on is popular,” Ward said, noting that chef-owner Gillespie is known for that. Recent popular items have included a sorghum-glazed pork belly with pan-roasted scallops and heirloom grains, and Sichuan style salt-and-pepper pork cutlets.

At the end of the meal, servers tally what’s been marked on the menu, which then becomes the guest receipt. Servers also take care of table maintenance, change out plates and bring out desserts that are on display boards.

Dim sum actually was the inspiration at Grit & Grace in Pittsburgh, whose chef-proprietor, Brian Pekarcik, is Korean American and spent time cooking in California.

Like other restaurants using this service style, the dim sum menu at Grit & Grace is eclectic, and includes items such as pork belly bites with orange, chile, garlic and ginger; confit chicken wings with herbed buttermilk; and smoked trout with yogurt, asparagus and pea shoots in pink peppercorn vinaigrette.

“Housemade kimchi is always on the menu,” general manager Heather Perkins said. “It’s a nice accompaniment, and traditionally in Korea it’s always on the table.”

She said most customers treat the dim sum, priced at around $5 as supplements to the à la carte menu, but some people do only order dim sum, which is brought out on trays for people to select.

“We have a cart, but it’s a small restaurant so the trays work better,” Perkins said. She said the dim sum items are often things the restaurant gets in small quantities, such as grilled beef heart, or items that are in short supply, such as locally foraged shiitake mushrooms.

“Something that’s $40 a pound we can’t feature all over the menu, but we can feature some key ingredients [as dim sum], which is really fun.”