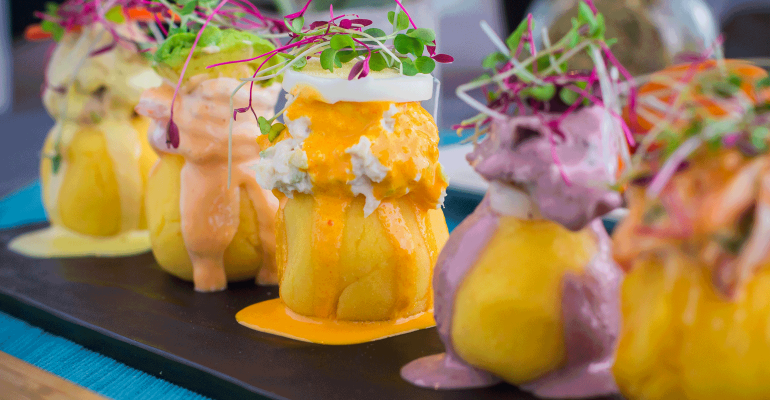 Nikkei, Chifa and the ceviche-sushi axis

Awareness grows for the multi-cultural flavors of Peru

Peruvian cuisine — and a host of new concepts dedicated to it — is spreading across U.S. the way the flavor of Peru’s aji amarillo chile pepper disperses across the tongue: Full-bodied, yet subtly.

For some time now Peruvian dishes have been slowly showing up on restaurant menus, according to menu research firm Datassential. Though only about 1 percent of restaurants specify the term “Peruvian” on their menu, this represents a more than 21 percent growth over the past year.

Peruvian cuisine is a unique mix of techniques and ingredients from the indigenous population, as well as immigrants who brought their culture to the South American country at various times during its history, including Spanish, Italian, German, Chinese, Japanese and West African.

Nikkei in Dallas, for example, is a 105-seat restaurant with a rooftop patio designed to be a vibrant, immersive experience into the combination of Japanese and Peruvian cuisine known as nikkei.

The latest concept from Milkshake Concepts, the hospitality group behind the Dallas concepts Citizen and Stirr, Nikkei boasts a tapas-style menu meant for guests to share while tucked into one of the restaurant’s cozy black banquets surrounded by modern Japanese décor dominated by bold backlit Japanese wallpaper.

Among the many dishes are truffled Hamachi crudo with Perigord truffle, infused oil, confit tomato and serrano peppers; wagyu beef infused with Peruvian spices; as well as a selection of sushi, sashimi and fusion rolls, such as Spicy Salmon with aji amarillo, avocado and cucumber.

“The greatest challenge is staying true to the integrity of the cuisine while ensuring it’s approachable for the local demographic,” said Imran Sheikh, co-owner and managing partner of Nikkei. “It would really be easy to make everything very American, but lose the soul of the cuisine.”

Similarly, Sen Sakana is a meticulously planned and years-in-the-making 190-seat full-service restaurant slated to open in Midtown in New York City later this summer that will feature every aspect of nikkei. The interior of Sen Sakana

Since August, Chicagoans have had the opportunity to explore the cultural influence of Japan on Peruvian cuisine at Boleo atop the Kimpton Gray Hotel.

“So many people don’t know what Peruvian cuisine is,” said Alexis Hernandez, chef de cuisine at Boleo. “We have a rich cuisine with influences from many cuisines — Creole, African, Chinese, Japanese. A lot of influence from Japanese.”

To expose Chicagoans to this largely unfamiliar cuisine, Hernandez keeps the menu simple, focusing on dishes that showcase the best of two worlds, such as tiradito, a combination of Peruvian ceviche and Japanese sashimi. He also uses ceviche, which is familiar to many guests, as “a gateway” to try more adventurous offerings, such as Corazon Beef, beef heart with aji panca, huancaina sauce and grilled potato.

“I feel very proud as a Peruvian chef to see my culture growing,” said Hernandez, who is the former private chef to the ambassador of Peru.

In Boston, there’s Ruka Restobar at The Godfrey Hotel, a contemporary restaurant and bar that opened in December, where diners can explore the Peruvian-Asian culture through the unique dishes and flavors of Nikkei as well as Chifa, which is Chinese-influenced Peruvian.

While Peruvian cuisine has been and continues to be a trend in high-end dining, a number of new casual spots offering approachable, convenient and affordable Peruvian fare have opened up across the country.

Seven years ago, when he opened his first SuViche in South Florida, Aliosha Stern says no one else was doing Peruvian/Japanese cuisine in a casual setting.

SuViche offers fast-casual menu pricing delivered in a full-service-like format. The simple-yet-diverse menu is largely focused on ceviche and sushi, with a smattering of hot dishes and appetizers and specials.

Among the most-ordered items are Ceviche Suviche, a twist on the Peruvian “acevichada” made with Japanese spices; Lomo Saltado, steak sautéed with red and green onions, tomatoes and signature Lomo Sauce served with a side of crispy French fries and white rice; and the White Hot Roll, a spicy tuna roll with tempura flakes and cream cheese topped with more tuna, served with SuViche Sauce and Sriracha.

There are currently four SuViche in South Florida, with plans to add a few more to the area in the next few years. Eventually, Stern hopes to expand the concept to other markets. The interior of Boleo

The opportunity to bring Peruvian fare to the San Francisco Bay area without the high-cost of running a full-service restaurant inspired chef Carlos Altamirano of the Altamirano Restaurant Group to open Paradita Eatery, a fast-casual Peruvian street-food concept in the mixed-use Public Market in Emeryville, Calif.

“There were no other fast-casual concepts in the Bay area offering Peruvian Food,” said Altamirano. “We have been doing it with our trucks for several years now… this was an easy transition for us and people have been excited to visit Paradita.”

Open since April, Paradita guests order at the counter from a menu concentrated on sandwiches, bowls and skewers priced around $9 to $15.50 and served on compostable dishware. In addition to an dine-in menu, the restaurant also offers curbside service and select items from a self-service grab-and-go case. Altamarino plans to open a second location in summer 2018.

Somewhere between high-end and fast-casual is Dr. Limon Ceviche Bar, a two-unit casual-dining concept in the Miami area that offers Peruvian cuisine with South Florida flair.

Best sellers include Fried Ceviche, three spheres of ceviche marinated in lime then flash fried and topped with scallions, red onions, and house-made acevichado sauce; and Pulpo del Dr. Moreno, slices of octopus marinated in aji panca, vinegar and cumin, then flambéed in a wok and served on a sizzling skillet with yellow golden potatoes and salsa criolla, made with onions, lime, tomato and cilantro. The average check for two with drinks is about $50. “Globalization has opened minds with information and as a result, each day people aren’t only willing to try exotic cuisines but demand it,” said Carlos Brescia, founder and corporate chef of Dr. Limon.

Three franchise locations of Dr. Limon are scheduled to open in the surrounding area in early 2018.

Brescia is also planning to launch Ceviche Power, a fast-casual ceviche restaurant, set to open in Doral, Fla., in the coming months.

“We want to offer healthy, convenient and fast options with Peruvian flavors for everyone,” said Brescia.