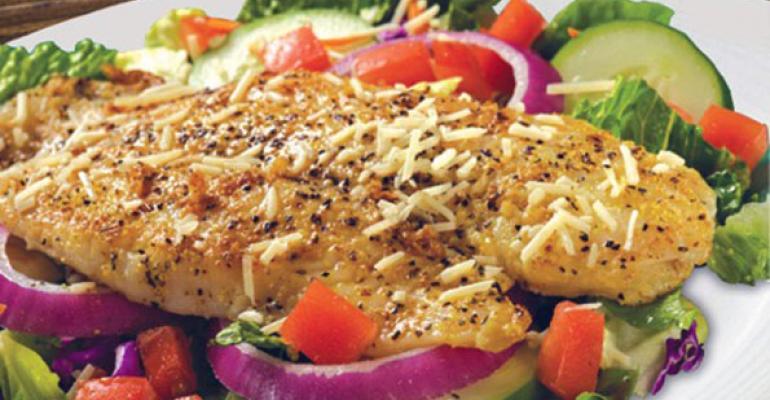 The lighter side of the menu

As the seasons change, operators and chefs look to add lighter dishes to their menus. Sponsored by Regal Springs.

At Growler USA, a 3-unit microbrew pub with 30 locations in development, the seared ahi tuna is outselling heartier appetizers such as the Bavarian Pretzel Logs or the Beer Brat Sliders.

With spring finally here and the days growing warmer, restaurant operators and chefs are adding lighter dishes to the menu, from seasonal salads to lettuce wraps, and incorporating new ingredients and fish like premium tilapia for a lighter protein. The less weighty, often lower calorie fare is resonating with consumers, whether at brewpubs, sports bars or fast casual restaurants.

“People are feeling like, I cannot hide under my parka anymore,” says Patrick Sugrue, president and chief executive of the fast casual Saladworks chain. “They are dressing lighter and thinking about eating lighter and exercising. It’s about being healthy and feeling good about what you are eating.”

Adding lighter dishes helps broaden the appeal of the menu at Tampa, Fla.-based Beef 'O’ Brady’s, says David Groll, director of research and development for the family sports bar concept that has more than 200 locations in 23 states.

Groll, who trained at The Culinary Institute of America in Hyde Park, N.Y., and served on its Healthy Menu Collaborative with Harvard University’s School of Public Policy, joined Beef 'O’Brady’s 14 months ago to work on menu development.

“A part of my mantra is to be a guide to healthier and better-for-you cuisines,” Groll says. “And we are responding to the comments and requests from our restaurant guests as well as our franchise community.”

Beef 'O’ Brady’s seeks to appeal to families with a selection of lighter dishes. For example, diners are stopping in for lunch or to watch a game and ordering the Big Catch Salad — a grilled or blackened white fish, such as tilapia, served on crisp salad greens with cucumbers, red onions and tomatoes,  topped with Parmesan cheese.

All-natural tilapia, with its low fat and finely textured sweet flesh, is also popular at other restaurants looking to offer lighter fare. Available both fresh and frozen, lake-grown tilapia can be baked, broiled, grilled and steamed.

At Captain D's Seafood Kitchen, Blackened Tilapia is prepared on the grill and served on a bed of rice with a choice of two side dishes and a breadstick. Meanwhile, Maggiano's serves a Parmesan-Crusted Tilapia with capers, tomatoes, sage, lemon butter and spinach.

“The early returns show consumers are loving it,” Sugrue says.

The LTO gives Saladworks an opportunity to test new ingredients, which if popular can be added to the lineup for customized salads — for example, the roasted asparagus and kale.

“If they really do well in these seasonal salads, it allows us to make additions to our already plentiful case of ingredients and fixings,” he says.

Staying up-to-date with ingredients, such as the popular quinoa and being cognizant of the proportions and presentation of a dish also helps increase sales of lighter fare items, Groll adds.

Even when a concept is already perceived as being healthy, operators are still upping the ante on lighter fare. Pita Pit offers made-to-order sandwiches featuring a variety of lean grilled meats, vegetables, cheeses and sauces. Based in Coeur d’Alene, Idaho, the fast casual concept has more than 600 locations in 11 countries.

In support of its reputation for offering healthful fare, Pita Pit is rolling out a smaller pita for sandwiches and, in some locations, is pairing the smaller pita with fruit smoothies, says Patrick O’Dell, director of brand marketing. The larger pita bread is about eight inches while the smaller one is six inches.

“Just to offer a second size is important,” O’Dell says. “We’re giving the customer the opportunity to choose a healthier and lighter path, while at the same time not sacrificing flavor.”

Customers have become very selective when it comes to healthful choices, so freshness and quality are major factors when designing lighter fare dishes, says White of Growler USA.

In addition to the blackened ahi tuna, the smoked salmon salad with cherry tomatoes and a maple soy dressing is the microbrew pub’s most popular salad. The Growler also makes chips of fiber-rich barley with sunflower seeds. It has one-third less fat than a regular corn chip.

“People in general are more conscious of what they are eating, what they are putting in their bodies,” he says. “When you go out, you want to have food that sets well with you, that you enjoy and want to go back and try again.”