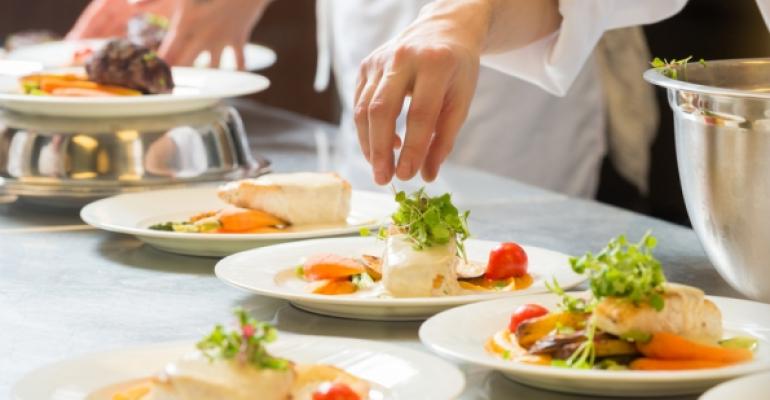 Hooking consumers with the best seafood

Operators cite several key factors that go into selecting the right fish for the menu. Sponsored by Regal Springs.

For many restaurants, the right fish is one that is versatile, possesses a good flavor profile and comes from a sustainable source. Also, it has to be a fish that diners are requesting. Tilapia continues to be among the top three fish ordered at restaurants. Customers and chefs appreciate it for its texture and mild flavor, making it a great fit for almost any menu application

Versatility is important because chefs often like to prepare seafood in a variety of ways and add different flavors. That is one reason why mild white fish such as tilapia is popular, says Fred LeFranc, chief executive and president of Results Thru Strategy, a foodservice consultancy in Charlotte, N.C. “It serves as a platform for things that are different and unique and special.”

The key, experts say, is to be aware of what the consumer wants. At Tampa, Fla.-based Beef 'O' Brady's, a family sports pub, many of the menu items contain mild white fish. “The first question out of the customer’s mouth is, ‘Is it a mild white fish?’” says Stan Dorsey, corporate executive chef and director of menu development for Beef 'O' Brady's / The Brass Tap. “It helps to have it printed on the menu.”

Beef ‘O’ Brady’s fish selections are available grilled with lemon pepper or blackened, or breaded and fried. In addition, the chain features fish tacos prepared with hand-breaded mild white fish topped with fresh cabbage, cheddar jack cheese and creamy Poblano sauce. “You have to jazz it up a bit,” Dorsey says.

Flavor profile also is important. “People have a desire to try something that is intriguing or interesting without being too far out,” says Cliff Pleau, vice president of research and development for Bonefish Grill based in Tampa, Fla. “People go out to celebrate or to experience something they can’t make at home.”

For these occasions, Pleau says, sea bass is an iconic fish. “It has a sweet, meaty, flaky, rich composition. It always does really well. People go out to eat it and they remember it,” he says. It is served with a selection of sauces such as the Pan Asian sauce.

Regal Springs tilapia is the preferred supplier to both national chains and independent restaurants. The company employs the process of aquaculture, or fish farming, to raise its 100-percent all-natural, chemical-free, lake-grown tilapia. The fish are grown in large floating pens in pristine lakes in Honduras, Indonesia and Mexico.

Sometimes an operator’s seafood selection reflects personal preferences. “When we begin the process of rolling out a new fish dish, it always begins with what we feel like eating,” says Peter Ryan, owner and executive chef of The Plimoth in Denver. “Hopefully, if we are in the mood to eat a specific fish and it is in season, then we have a pretty good shot of making our guests happy.”

The Plimoth offers a halibut dish that Ryan says starts with 5-ounce brick portion. It is wrapped in caul fat, the thin membrane that surrounds the internal organs, and then cooked in aromatic clarified butter with parsley, rosemary and thyme. The fish is basted many times.

“As the fish is being basted, we stick a sage leaf on top and baste some more,” Ryan says. “Then we put it in the oven for a minute or so, cooking the fish to a real nice medium rare, slightly opaque.”

Identifying consumer trends also is important when menuing seafood. “A lot of thought goes into it,” says Josh Yosick, regional chef for the Columbus, Ohio-based Rusty Bucket Restaurant and Tavern. “We look at what the culinary trends are, and what the guest feedback has been for us.”

For example, seafood tacos are a hot trend now, and the 24-unit Rusty Bucket recently added Mahi Mahi Tacos to the menu. The fish is lightly blackened, topped with fresh citrus cabbage slaw, sour cream drizzle and fresh cilantro, and served with Cuban style rice and beans. The tacos are selling very well. “People are trying to eat healthier, and fish is a way to do that,” Yosick says.

Another big hit for the Rusty Bucket is the Asian Tuna Wrap, with soy-marinated yellowfin tuna seared rare and served with wasabi mayo, sticky rice, a marinated Asian vegetable medley and ponzu dipping sauce. “It is a unique twist on a wrap,” Yosick says. “It’s almost like a sushi roll.” Rusty Bucket also offers Blue Plate Specials such as the Tequila Lime Tilapia, blackened and served with steamed broccoli florets atop black bean corn salsa with fresh squeezed lime juice.

Sourcing may also play a factor in an operator’s decision.  “You have to look at sustainability,” says Jamie Walton, director of culinary and training for SquareOne Holding Company, a restaurant consultancy in Chattanooga, Tenn. “It matters to our customers and it matters to us as well.”

The company also owns restaurants such as Carolina Brewery, with two locations in North Carolina. At the Chapel Hill location, popular items include the Seared Salmon with black-eyed pea salad, house vinaigrette and basil oil, and the Chili Seared Mahi, which is pan seared and served over local succotash and with a chipotle blackberry reduction.

Another factor is how well the fish interacts with other ingredients. A robust fish can withstand spices and heavy sauces, while a mild fish would need a lighter presentation. “You wouldn’t want to have a heavy sauce with a seared tuna,  because that would take away from the delicate flavors of the tuna, while salmon is great with dill and cream sauce,” Walton explains.

At Famous Toastery, a better breakfast concept based in Davidson, N.C., the fish has to pass a simple test. “The way we choose fish is we ask, 'What goes good with eggs?'” says Robert Maynard, chief executive and founder. “What goes good with an omelet? Lobster, shrimp; also you pick something like trout, because North Carolina trout is fantastic.”

Famous Toastery's trout omelet began as a special and was so popular it is now a regular menu item. It contains sautéed onions, garlic, Gruyère cheese and vegetables. “We broil the trout, then pan fry it in olive oil,” Maynard says. “It has a really nice bold taste. It’s not normal for an omelet, but what’s normal?”

Consumers are likely not asking what’s normal, but what’s good. The answer, at least in seafood selection, is fish that answers restaurant-goers’ demands for a protein that is delicious, on-trend, and environmentally responsible. Operators who find fish that has good flavor and comes from sustainable sources are the ones who can succeed in this ever-changing category.