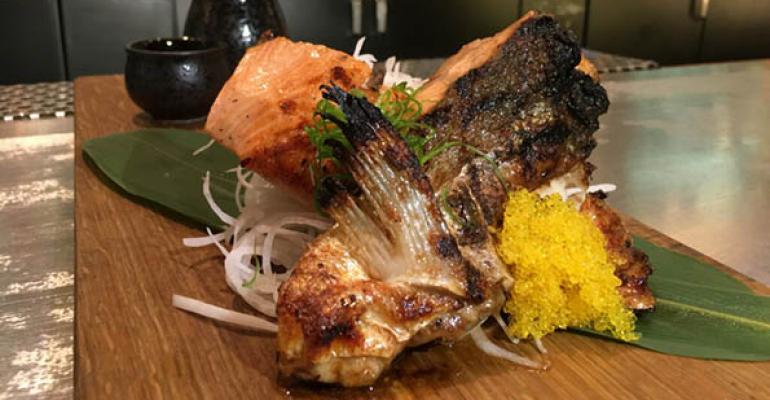 Chefs find uses for off cuts of wild salmon

With the recent arrival of peak wild Alaska king salmon season, diners can find the largest and least abundant salmon species on menus everywhere. While many menus will feature salmon fillets, a number of chefs are hoping to maximize their catch by getting diners hooked on other parts, as well as unexpected preparations of, this rich, buttery tasting and delicate textured fish.

“Salmon extras, like all fish, test chefs, especially those of us in 'sustainable’ restaurants, to think outside the box in order to completely utilize the products that we order,” said Chef Michael Frauenheim.

Among the ways Frauenheim uses all parts of the salmon at Rick Moonen’s RM Seafood in Las Vegas is by serving the collars — the fatty part just below the head. To prepare the collars, Frauenheim brines them in water, salt and Bragg’s apple cider vinegar, dries them, seasons them with salt and grills them. He finishes them in the oven for about two minutes and then drizzles them with garlic ponzu. The collars have been part of the restaurant’s sushi omakase, or tasting menu, as well as available on the hour happy hour menu since October 2015.

“Collars are very easy to prepare,” Frauenheim said. “Think of a nicely marbled rib eye. You do not have to do much to it to enjoy its natural quality. Customers love the rich fatty flavor of the collar that is only enhanced by the smoke flavors of the grill. They simply pick them up and eat them like a chicken wing.”

At The Kitchen in Denver, development chef Gabe Godell is using wild Alaska salmon scraps to make a potted salmon appetizer. The dish is made with salmon scraps that are poached in a court bouillon, flaked and then marinated in Pernod, as well as smoked salmon. Both are folded into a mixture of butter, lemon, crème fraîche, shallots, egg yolks, chives and extra virgin olive oil. Then they’re placed in a glass vessel and chilled.

“It is a delicious and quick shareable appetizer,” Godell said. “The Kitchen is zero-waste, so we love dishes that allow us to use the whole animal or vegetable as part of our sustainability efforts.”

Similarly, at Scala’s Bistro in San Francisco, executive chef Larry Finn likes to use the fatty belly that he trims off of salmon fillets to make crudo. To prepare the crudo, Finn brushes salmon bellies with vodka, then packs on a mixture of salt, sugar, lemon zest, orange zest, chopped tarragon, chives, parsley and chervil. After a few hours, he brushes off the cure, packs on a fresh mixture of the same herbs, slices the fish and serves it with a shaved root vegetable salad.

Finn also likes to run a special of roasted wild king salmon tails with salsa verde and a salad of shaved fennel and arugula.

“I like the challenge of coming up with something different and to introduce that to our guests who would have never tried it, but now enjoy it,” Finn said.

At Cure in Pittsburgh, Justin Severino also likes to come up with unexpected salmon dishes, such as his sockeye salmon ’nduja on a crostini with pickled peppers and chives. The dish went on the menu last year during salmon season. A solid seller, Severino says it will return to the menu in a few weeks.

“We started our seafood charcuterie menu with a Swordfish finocchiona, which worked out really well,” Severino said. “After that I just thought about how the traditional flavors of ’nduja would work really well with wild salmon. And it just happened to be salmon season.”