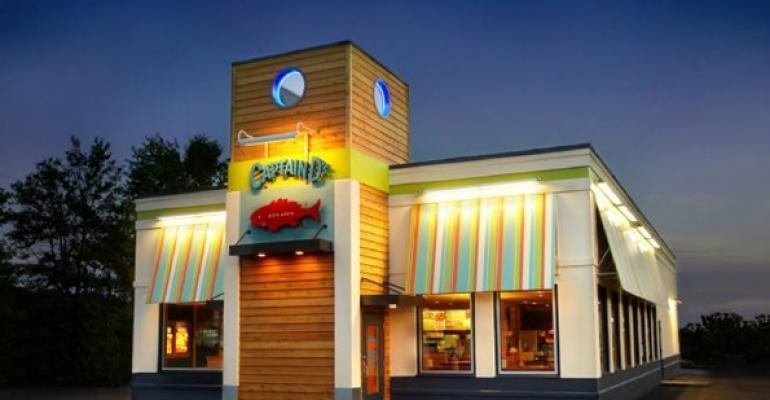 Since joining Captain D’s in October, vice president of product innovation Jason Henderson has been working on broadening the chain’s appeal with a range of lighter items that aim to draw a larger crowd.

Henderson most recently worked for AMC Theaters, where he was in charge of the company’s dine-in theater project. Before that, he was on Applebee’s product development team.

He recently shared his plans for the 530-unit quick-service chain with Nation’s Restaurant News.

What are you working on at Captain D’s?

One of the biggest things that we’re working on is our new grill platform. It’s currently at 150 locations or so, and we hope to have it in our entire system by the end of the year. That’s a big deal for us. It’s a breakaway from our core offerings of breaded or battered items, and it’s allowed us to capture a whole new palate of our customers.

Who are Captain D’s core customers?

Most of them are 50 years old or better. We want to maintain them and also look to the next generation of Captain D’s guest. That’s a group that is asking for something that’s lighter and healthier. This [grilled platform] appeals to the changing needs of existing customers and to future customers.

What are some of the new grilled items?

We’ve got a grilled salmon and a grilled tilapia, and a surf and turf that’s a skewer of beef and one of shrimp on rice, with two sides and a breadstick.

We looked at stuffed flounder, and a grilled shrimp pasta dish, but our customers tell us they like to stick to a fairly plain grilled fillet, and then add flavor to it through some sort of tropical flavoring or sauce.

What kinds of flavorings and sauces is the chain offering?

There are three flavors our guests right now say they’re looking for. Cajun is one, and that doesn’t necessarily mean spicy, but the zest of peppers and onions with a background of red chile.

Then there’s Mediterranean — garlic herb, garlic Parmesan and herb — and, believe it or not, traditional lemon pepper.

How are the grilled items doing?

We’ve had some of the highest product mix result on the grill [where it’s available] and I don’t see it slowing down. And much of that is incremental, which shows that we’re not just appealing to our usual guest, but driving new traffic or more return traffic than in the past.

When did you start testing the grilled items?

They began testing it over the last year and a half, and it really hit its full rhythm and pace at our last conference in November, when we got the entire company and franchisees together. We hope to have the grill systemwide by the end of the year, and it makes sense as consumers at large get more intelligent about their food choices. They’re making smarter decisions, and I think we’re definitely running to meet them.

What is Captain D’s most popular menu item?

Our batter-dipped whitefish. That’s a legacy item for us; what the brand is built on.

What are the most popular grilled items?

The surf and turf, the salmon and tilapia. We’re finding a lot of success in offering great quality at a great price, so we always promote a $4.99 full meal deal. Currently that’s new fish tenders: Whole muscle fish — we try to avoid blocks or things that are pressed or formed — battered, about the size of a chicken tender. You get four pieces, two sides and hushpuppies.

Our guests come for the $4.99 deal, but we’ve seen success with some add-ons and appetizers, and we’re playing with shareable items.

What kinds of shareable items does Captain D's offer?

We’ve had a Lobster Bite and a Crab Popper, both of which have done well for us in that larger, shareable format. When you consider that these aren’t things that replace [customers’] meal, it’s a great way for them to spend a little bit more. A lot of our guests are dine-in guests, and we see parties of two or more come in and eat our meals in the dining room, and it’s easy to pay a little bit more for something extra at the beginning or during their meal.

What do you charge for them?

Are you looking to adding any new fish?

I think you’ll see a premium piece of cod coming out at some point.