/sites/all/themes/penton_subtheme_nrn/images/logos/footer.png
Recent
Recent
Chick-fil-A launches its first merchandise line
Nov 30, 2022
What we learned about RRF this week
Nov 30, 2022
New Sheetz locations in Michigan to open in 2025
Nov 29, 2022
Restaurants and robots: Don’t be alarmed
Nov 29, 2022
White Castle, Coca-Cola team up with gamer to create exclusive drink
Nov 29, 2022
Featured
How 21 restaurant companies performed in their most recent quarters
Nov 22, 2022
How eco-friendly Seattle restaurant chain Just Poke is doubling in size in 2022
Nov 17, 2022
In the Mix this week: White Castle’s culture, a CREATE recap, Denver’s restaurant scene and more
Oct 27, 2022
How this emerging brand is planning on nearly quadrupling in size in just one year
Oct 21, 2022 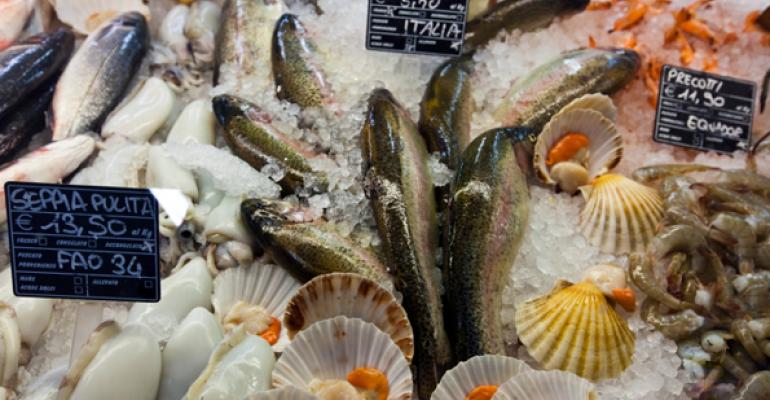 When chef Michael Leviton shops for seafood for Lumiere Restaurant in Newton, Mass., he usually buys whatever he wants regardless of price.

“My concern is what is best that day,” said Leviton. “Quality and flavor are driving [my buying] first and foremost.”

Leviton admits he’s in a rarified position. He runs an 88-seat fine-dining establishment in a wealthy suburb of Boston and changes his menu daily based on what fresh food is available. He’s passionate about, and highly committed to, sustainability, so that’s a major factor in his purchasing calculus, but beyond that he can do just about whatever he wants.

Seafood, purchasers say, is among the most complex proteins to buy since its availability and price fluctuations tend to be far more volatile than other proteins. But most operators are not in Leviton’s fortunate position and therefore need to find a strategy for consistently purchasing the seafood their menu requires within their price limitations.

Here, Leviton and several other seafood-buying professionals share key strategies restaurant operators can use to get what they want at a price they can afford.

Be fish (supplier) friendly. Knowing suppliers well and working with them hand-in-hand is critical to navigating the uncertain waters of the seafood world. For example, Leviton talks either daily or very frequently to each of his two fish and shellfish suppliers.

“The easiest way to get great fish is to have great relationships with your purveyors,” said Leviton.

Go with the flow. Bad weather, shifting ocean temperatures or a boat that goes out and brings back a smaller catch than predicted are all par for the seafood-sourcing course.

“You have to be confident when you need to move off of something … you have to be willing to go to an alternative,” said chef Jeff Rogers of Cindy’s Waterfront at the Monterey Bay Aquarium. “You’re looking for similar textures, tastes.”

For example, when salmon hit $22 per pound a while back, Rogers took it off his menu. He knew that diners who had already paid the pricey Aquarium admission just wouldn’t be willing to pay the premium. Instead, he offered Arctic Char, a milder, similar-tasting fish that is considerably less expensive.

When your supplier doesn’t have what you want, Tom Douglas, owner of Tom Douglas Restaurants, suggests asking about bycatch, or unintentionally caught fish. Douglas, who is committed to using sustainable seafood at all 13 of his restaurants, says, “We have to get out of the 'prime' mode we’re in and serve everything.”

Chart a course. Concepts with hundreds of stores can’t buy on the fly — they need to map out a longer term purchasing strategy. Captain D’s, a 522-unit chain known for its hand-battered seafood, plans well in advance what fish it will purchase.

“You position out 12 to 15 months ahead of time,” said Janet Duckham, Captain D’s vice president of purchasing. “We don’t want to take things off the menu.”

One tactic that helps Captain D’s execute on that strategy and get what it needs at a fixed price is buying frozen-at-sea fish. “Everything is frozen at sea,” she said. “It’s the freshest way to do seafood.”

Tom Douglas also uses fresh-frozen fish to plan for and meet diners’ expectations. Fifteen years ago he wouldn’t even have considered it, but diners’ year-round demand for salmon finally drove him to it. “The big thing was wild salmon. We just didn’t serve it if it wasn’t fresh,” said Douglas. “Now, with so much pressure … you can get tired of doing without.”

Get schooled. Whether it’s answering questions about an unfamiliar species, why one fish dish is priced higher than another or why the kitchen ran out of halibut and is now serving cod, a seafood-savvy staff is essential.

“To have a staff that can really have an off-the-cuff discussion, explain [these things], then it’s an easy sell,” said Leviton. “It’s all about educating ourselves and passing it on to cooks, servers. If customers wants to engage they can.”