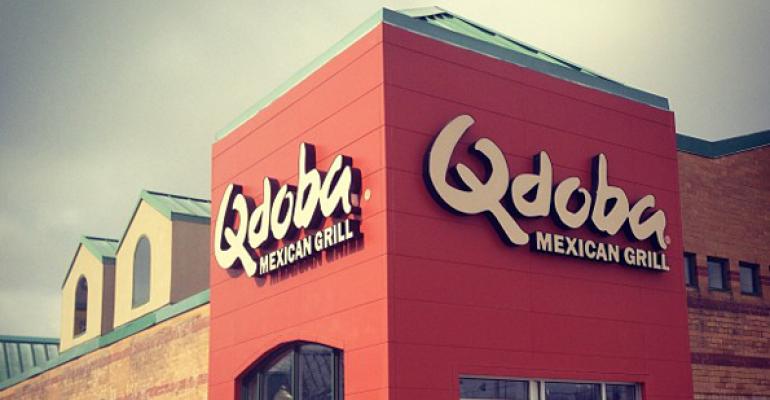 The brand weighed down performance for Jack in the Box Inc.

Declining same-store sales at Qdoba Mexican Grill weighed down results for parent Jack in the Box Inc.’s second quarter, but company officials said a turnaround is in the works.

Revenues declined nearly 3 percent to $355.6 million from $366.5 million a year ago. Same-store sales rose 0.1 percent systemwide for Jack in the Box, including a 0.9-percent increase at company locations and a 0.2-percent decrease among franchise stores.

For Qdoba, same-store sales fell 1.5 percent systemwide, including a decline of 2 percent at company units and a drop of 0.9 percent at franchise locations.

In a call to analysts Thursday, Linda Lang, Jack in the Box Inc.’s chief executive, said traffic was negative for Jack in the Box during the quarter, especially during January and February when headwinds from higher gas prices, delayed tax refunds and higher payroll taxes took a toll. The company doesn’t disclose Qdoba’s traffic trends.

But same-store sales overall improved in the latter half of the quarter as consumers adjusted and gas prices dropped, Lang said, and those improved trends have continued into the third quarter so far.

However, catering sales at Qdoba rose 11.5 percent during the quarter. Lang noted that Qdoba’s catering in the Denver market has not been impacted by that of competitor Chipotle Mexican Grill, which began a roll out of catering in Denver earlier this year.

In March, the company named Tim Casey, former president and chief executive of the Mrs. Fields and TCBY brands, as president of Qdoba. After about eight weeks on the job, Casey is taking a hard look at Qdoba’s performance and will be taking steps to renew the brand, Lang said, though she declined to offer specifics.

“He clearly has a sense of urgency of the need to improve performance at Qdoba,” she said. “While change will not occur overnight, we’re confident in Tim’s ability to renew the brand.”

Meanwhile, the company is also taking steps to improve the brand. Lang said executives have gone on road shows to re-engage field operating teams, for example. The company is also looking at Qdoba’s marketing calendar to pull back on the level of discounting, which has hurt margins.

Lang said she was optimistic that Qdoba would see a stronger third quarter, as the chain typically benefits from the Memorial Day and Fourth of July holidays, as well as graduation season.

Jack in the Box: Building on personality

At Jack in the Box, efforts over the past few years to improve menu ingredients and service are continuing to have a positive effect, Lang said.

She said the chain will continue to look for promotions that bring out the fun and somewhat irreverent personality of the ping-ball-ball-headed Jack, such as the marketing efforts during the second quarter around the Hot Mess Burger, which evoked Jack’s days in the 1980s “hair band” Meat Riot.

Those kinds of promotions “with flair and personality” tend to get more attention than “value messages from the competition,” said Lenny Comma, Jack in the Box’s president and chief operating officer.

Jack in the Box sold four company units to franchisees during the quarter, which generated a gain of about 1 cent per share.

The second quarter results also included a $2.7 million pre-tax loss, or about 4 cents per  share, related to the sale of 16 restaurants as part of an ongoing refranchising plan. The deal is expected to close before the end of the year.

The company also said it plans to refranchise another 50 units, 40 of which are likely to sell before the end of the year. After the refranchising effort is complete, the chain will be 80-percent to 85-percent franchised.

At the end of the quarter, the company operated or franchised 2,256 Jack in the Box and 647 Qdoba restaurants.

For the year, the company expects same-store sales at Jack in the Box company restaurants to rise between 1.5 percent and 2.5 percent. At Qdoba corporate locations, same-store sales are projected to be flat or increase 1 percent.