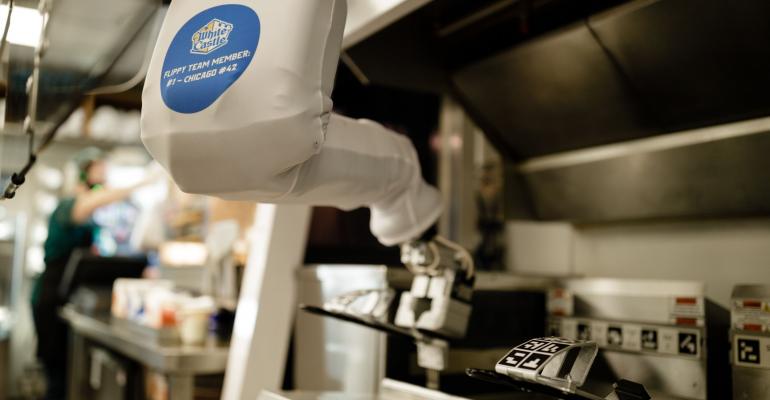 After a pilot test, White Castle looks to add Flippy the robot to 10 restaurants during the post-COVID-19 ‘new normal’

Following the initial announcement of their partnership and pilot test in July, White Castle is expanding its work with Miso Robotics and Flippy the autonomous fry cook robot, the company announced Tuesday. The current one-store pilot test that began in late September in Chicago will be expanded up to 10 more undisclosed locations in 2021, following the early positive results of their test.

White Castle will be implementing the newly revamped commercial version of the Miso Robotics creation — Flippy Robot-on-a-Rail — which was announced earlier in October and gives Flippy the ability to more easily move in a modern commercial kitchen by gliding across multiple workstations on a rail.

“Artificial intelligence and automation have been an area White Castle has wanted to experiment with to optimize our operations and provide a better work environment for our team members,” Lisa Ingram, CEO of White Castle, said in a statement. “We believe technology like Flippy ROAR can improve customer service and kitchen operation.  This pilot is putting us on that path – and we couldn’t be more pleased to continue our work with Miso Robotics and pave the way for greater adoption of cutting-edge technology in the fast-food industry.”

Flippy 2.0 — Flippy ROAR — allows the robot to interact with a food hopper that “dispenses the perfect amount of food for preparation before moving to the cooking station.” An input zone also receives manually loaded baskets from kitchen employees and has a built-in safety shield to protect employees from splatters and outside contamination.

New updates also allow the robot to assist kitchen workers with a new dashboard view and upgraded its learning capabilities to quickly adapt to new menu items and changes.

Flippy the robot is part of a trend of autonomous kitchen assistants that have been released in recent years, and the trend has resurged as a socially distanced solution for restaurants looking to make their customers and employees feel safer during the pandemic. According to White Castle, the need to limit staff while maintaining cooking speeds and freshness as customer demand for off-premise surged during the pandemic led the restaurant chain to look toward autonomous solutions.

Now with Flippy’s successful test pilot, White Castle will be expanding the program and particularly utilizing the fry cook robot to help out with late-night shifts, which are notoriously difficult to schedule. Cameras and sensors will also give Flippy the capability to show employees real-time inventory needs and offer recommendations for complex or bulk orders.

One of the biggest goals is to improve overall production speed, according to White Castle. Since the pilot test was instituted in September, Flippy has made an average of 360 baskets of food per day.

“The goal is to redeploy staff to front of the house activities – like bagging up orders, cleaning and coordinating with delivery drivers – where needs have increased,” Jordan said.

“Our platform has become increasingly powerful and intelligent – allowing us to quickly scale, integrate into operations and show our ability to help keep customer service standards on par with White Castle’s industry reputation of excellence,” Buck Jordan, president and chairman of Miso Robotics said in a statement.