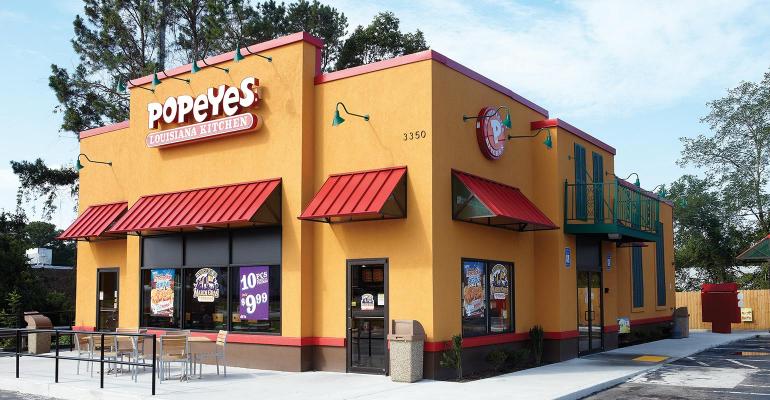 Weak results in Canada and at Popeyes, offset Burger King strength for RBI

Same-store sales declined 0.8 percent at Tim Hortons, largely due to weakness in the company’s Canadian home, while they also declined 2.7 percent in the period ended June 30 at Popeyes in the first quarter under RBI ownership.

But the chain’s flagship, Burger King, reported 3.9 percent growth, including 3 percent in the U.S., despite strength from the chain’s main competitor, McDonald’s Corp.

“While comparable sales for Tims and Popeyes were softer in the quarter, we believe we have the right strategies to grow sales in the long run,” RBI CEO Daniel Schwartz said on the company’s second quarter earnings call Wednesday. “We had a particularly strong quarter at Burger King. And we made good progress integrating Popeyes.”

Restaurant Brands International, based in Oakville, Ontario, earlier this year acquired Popeyes to give the company its three quick-service brands. That deal, as well as the performance of Burger King, has led its stock to increase 23 percent so far this year. The company’s stock fell slightly on Wednesday.

The acquisition has overshadowed sales weakness at Tim Hortons, the iconic, Canadian coffee-and-doughnut chain that in 2014 merged with Burger King to form RBI.

Executives on the earnings call said Tim Hortons baked goods, lunch and some limited-time offers were “not as good as in prior years” and the chain rolled off a value bundle from a year ago. “We remain very confident in our strategies to grow same-store sales in the long run,” Schwartz said.

In particular, the company believes its espresso-based beverages platform, launched in April, could become a growth catalyst in the future. Sales of such beverages doubled by the end of the quarter, Schwartz said. “The platform will continue to grow, particularly with the innovation we can launch around it,” Schwartz said.

RBI has faced questions about its relations with Tim Hortons franchisees in Canada, who have formed an association and filed a lawsuit.

Executives dismissed suggestions that negative publicity connected with franchisees’ complaints hurt the chain’s sales in Canada. “We don’t want to speculate on any of that,” Schwartz said. He also said that the company will continue to focus on its strategy of improving customer experience and working with operators to improve sales.

“None of that changes based on this other stuff,” Schwartz said. “We have a positive outlook for the brand for the balance of the year, and for many years. We’re more excited for the potential of Tims in Canada than ever before. We’re working with franchisees and their elected advisory board to do great things for the brand in Canada.”

At Popeyes, meanwhile, same-store sales were weak amid “increased competitive activity.” Executives said Popeyes’ marketing plans had been set when RBI acquired the chain, and that its efforts were less focused on value than in previous years.

“We’re optimistic on the Popeyes brand for many years to come,” Schwartz said. He noted that executives are working on the marketing calendar to improve sales.

“With respect to Popeyes, we do offer a good mix of premium and value, this quarter a little less value, that will fluctuate from time to time,” he said. Burger King’s same-store sales, meanwhile, were driven by a combination of premium and value items in the quarter, as well as operationally simple limited time offers. The chain generated attention in the period with its Froot Loops and Lucky Charms shakes, as well as the return of Mac ‘n Cheetos. It focused on premium with Steakhouse King and Mushroom Swiss King sandwiches and its improved Crispy Chicken Sandwich.

The company also had a two cheeseburger offer and 89-cent pancakes. “We maintained a balance of premium, value and LTO traffic drivers across product lines,” Schwartz said.

Yet the performance of the other two brands threatened to overshadow the performance of Burger King, which came despite a 3.9-percent same-store sales increase at McDonald’s and comments from the company that much of the increase came at the expense of its competitors.

“These two brands’ unexpected same-store sales issues are likely to loom large in investors’ minds in the near-term,” Instinet Analyst Mark Kalinowski wrote, noting that Tim Hortons and Popeyes combined account for two-thirds of RBI’s earnings before interest, taxes, depreciation and amortization, or EBITDA. Kalinowski has a Buy rating on the stock.

Revenues at RBI increased 9 percent to $1.1 billion in the quarter, thanks largely to the Popeyes purchase. Net income fell slightly, to $89.5 million, or 37 cents per share, from $90.9 million or 38 cents per share.