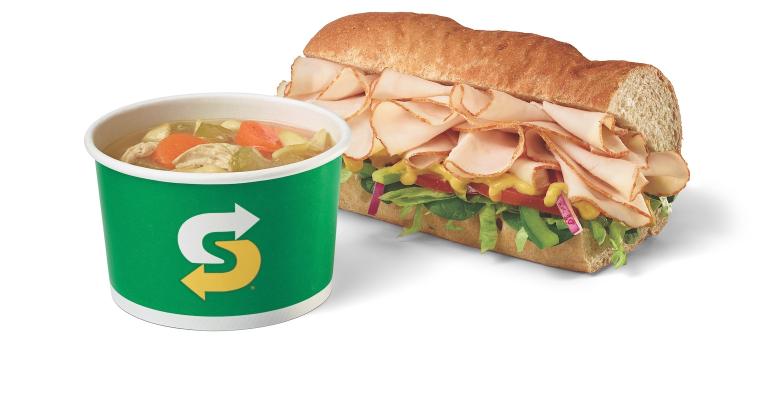 Sandwich brand will promote new soups with $1 off beginning Oct. 7

Subway restaurants will be promoting the brand’s new lineup of refreshed soups with discounted “Souped Up” weekends in October, the company announced this week.

The Milford, Conn.-based brand said customers will get $1 off soups every weekend in October, beginning Oct. 7, and are available to those with a Subway account and have opted into emails.

“We’ve stepped up our soup at Subway, with three refreshed recipes that will have our guests dreaming of sweater weather after their first sip,” said Paul Fabre, Subway’s senior vice president of culinary and innovation, in a statement.

“The Subway culinary team spent more than a year in our test kitchen tweaking our recipes to pack even more flavor into our fan-favorite side,” Fabre added, “and we can’t wait for America to taste the difference.”

To be eligible for the discount offer, the company advised that new accounts must opt into email 72 hours in advance at www.subway.com.

The company said some of the soup changes include:

Subway’s refreshed lineup of soups are an extension of the Eat Fresh Refresh effort that began a year ago and a continuation that includes new Subway Series of 12 signature sandwiches ordered by name or number this past summer.

Subway has more than 37,000 franchised restaurants across more than 100 countries.