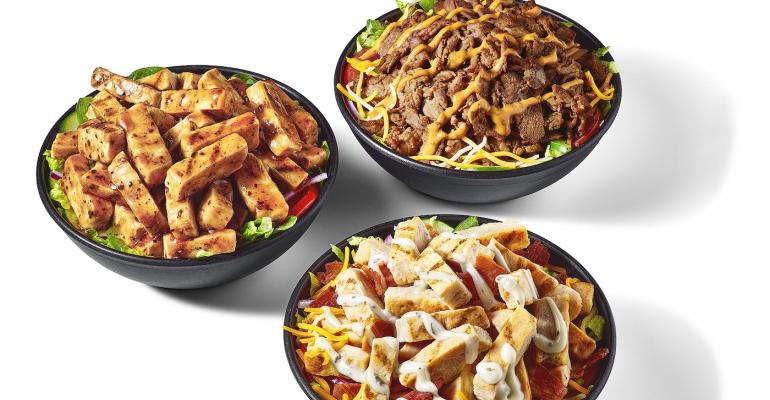 Subway plans to extend the bowl season into a year-round menu event.

For the first time, the Milford, Conn.-based sandwich brand in late December began offering protein bowls on its menus in addition to its traditional sandwiches.

A Subway spokesperson said that, at select locations, the brand is offering 11 signature protein bowls based on some of its most popular menu items.

“Guests are able to build any Footlong into a protein bowl with the same portion of protein, vegetables, cheese and sauce, just without the bread,” the spokesperson said, noting that excludes the Veggie Delite. “Each bowl can be customized to match guest preferences.”

The protein bowls start at $6.99 and can be customized for an additional cost. In addition, for a limited time, Subway is offering to upgrade Footlongs and protein bowls for $2, which includes double meat portions.

Subway said the protein bowls are a permanent addition to its menu, but the $2 double protein upgrade is available only for a limited time only at participating restaurants.

To promote the new protein bowls, Subway has partnered with Marshawn Lynch, the National Football League running back.

Lynch teamed with NFL wide receiver Keenan Allen for the Pro Teen Awards, which ae geared toward high school athletes who had to forgo the football season because of the ongoing pandemic.

Beginning Jan. 15, high school football players, coaches and parents can submit a video of the best pro moves — catches, tackles, throws or kicks. Twenty winning players will be selected to receive a personalized video from Lynch, an invitation to attend a virtual awards event with Allen and a $1,500 scholarship from Subway.