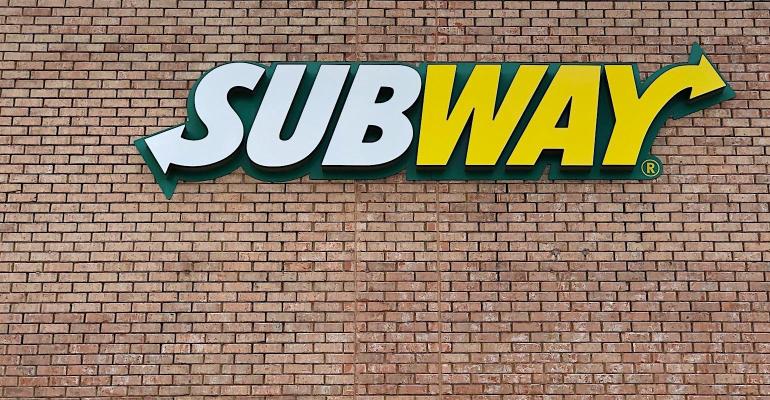 Ron Ruggless
A valuation of more than $10 billion and an environment of rising interest rates contribute to a bumpy road in in a possible Subway sale.
News>Quick Service

Brand retained advisers for a deal with an estimated valuation at $10 billion-plus, according to Wall Street Journal report

With Subway reportedly retaining advisers for a potential sale of the sandwich brand, an estimated value of more than $10 billion and a tightening interest rate market made conditions less than ideal for shopping around a major restaurant concept.

A year ago, John Chidsey, CEO of the Milford, Conn.-based Subway, said the company was dedicated to sales and not numbers of units. “We just want to focus on quality in the footprint in the U.S. as opposed to quantity,” Chidsey said in an interview with Nation’s Restaurant News.

Subway representatives told the Wall Street Journal they wouldn’t comment on ownership structure or plans and would continue to focus on the company’s “transformational journey.”

Subway has about 37,000 units globally, down several thousand from just a few years ago. The brand was founded in 1965 by Peter Buck and Fred DeLuca and run by DeLuca until he was diagnosed with leukemia. His sister, Suzanne Greco, took over in 2015, and Chidsey came on board in 2019, marking the first member outside of the family to lead the company.

Outside consultants contacted Thursday said they knew of no immediate interest from restaurant companies or private-equity groups in the Subway brand.

One noted that executives at Orlando, Fla.-based Darden Restaurants Inc., parent to the Olive Garden, LongHorn Steakhouse and Cheddar’s casual-dining chains among others, earlier this week said the company would look at possible acquisitions if the deal were right. But a brand in the quick-service sandwich segment would be outside Darden’s wheelhouse.

Restaurant Brands International Inc., Toronto-based parent to the Burger King, Tim Hortons and Popeyes Louisiana Kitchen brands, was once discussed as a possible suitor for Subway, but it snapped up another sub-sandwich concept in November 2021 with the acquisition of Jacksonville, Fla.-based Firehouse Subs in a $1 billion deal.

Sub-sandwich brands have rounded out the portfolios at other major restaurant companies. Inspire Brands in October 2019 completed its acquisition of Jimmy John’s Sandwiches. Atlanta-based Inspire Brands said the acquisition of the Champaign, Ill.-based Jimmy John’s complemented its other concept, which include the casual-dining Buffalo Wild Wings as well as quick-service Arby’s, Dunkin’ and Sonic Drive-Ins. Inspire recently sold its Rusty Taco brand to Gala Capital Partners

Observers said the Federal Reserve is likely to continue tightening interest rates, which makes borrowing more expensive. While the inflation rate cooled to 6.5% in December, according to the Bureau of Labor Statistics data released Thursday, most observers expected the Fed to continue its grip on the reins of interest rates.

"While there are growing signs that inflation has peaked, the Fed is worried about the overheating labor market," Bank of America economists said in a recent report.

The Fed began rapidly increasing its policy interest rate from near-zero in March to help bring inflation that peaked above a 9% annual rate this summer closer to its 2% target. Its federal funds rate was increased to a 4.25% to 4.5% range in December, the highest since 2007, with another rate bump expected in February.

Subway in 2022 made menu changes that moved it away from its customizable service model, offering a Subway Series line of sandwiches that could be ordered by number.

Subway’s restaurants are in more than 100 countries.