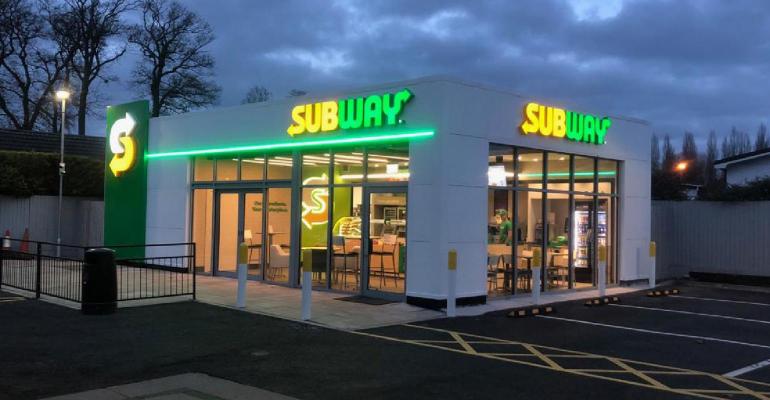 The Wall Street Journal reports that Subway has retained advisers to consider a potential sale with an estimated valuation at $10-plus billion.

Subway has retained advisers to consider a potential sale, the Wall Street Journal reported Wednesday evening. Both corporate and private equity suitors are expected during the consideration process, and early estimates value the sandwich chain at more than $10 billion.

Subway told the publication it doesn’t comment on ownership structure or plans and is continuing to focus on its “transformational journey.” That journey has been bumpy. The Milford, Connecticut-based, 37,000-some-unit global chain was founded in 1965 by Peter Buck and Fred DeLuca and run by DeLuca until he was diagnosed with leukemia. His sister, Suzanne Greco, took over in 2015 and John Chidsey came on board in 2019, marking the first member outside of the family to lead the company.

About 10 years ago, the bloated system began experiencing sharp sales and traffic declines and started to retrench. It has since closed an estimated 2,000 units and has navigated several rounds of franchisee conflicts over issues like the $5 Footlong deal that squeezed margins.

In addition to closing underperforming stores, the chain has also undergone several efforts to ignite a turnaround. Since Chidsey came on board in 2019, the chain has restructured its corporate structure, remodeled thousands of stores, launched a new marketing campaign with heavyweights like Tom Brady and Serena Williams, and pulled away from the customizable model its known for in favor of a signature sandwich lineup.

Datassential shows the company generated about $7.6 billion in sales in 2021, meaning the chain has likely made some progress against its turnaround plan given that estimated $10 billion valuation. Still, that $10 billion number is nearly half of where the chain was in its heyday in 2012 and the sandwich category in general has become far more competitive since. Notably, the WSJ points out that a sale may not happen.