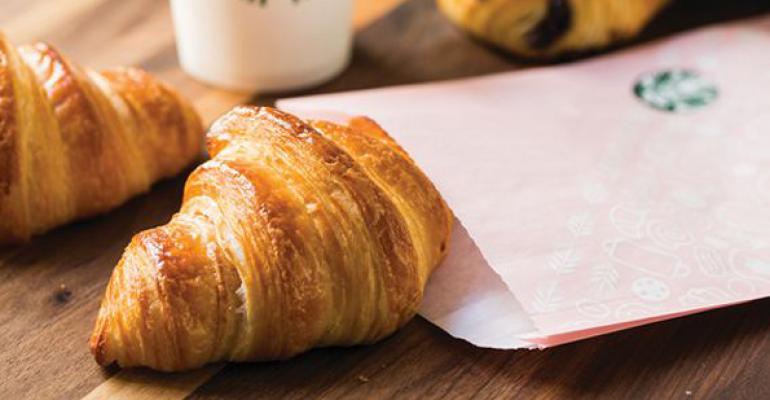 Starbucks’ efforts to improve its food offerings are paying off, and the non-beverage side of its menu offers significant growth potential, executives said Thursday after the company reported a 34-percent increase in profit for the fourth quarter.

In a call with analysts, officials with Seattle-based Starbucks Corp. said food sales contributed about 2 percentage points to the 8-percent increase in same-store sales among U.S. locations during the Sept. 29-ended quarter, particularly during lunch, which has become Starbucks’ fastest-growing daypart.

“We’ve achieved in the last nine months what we didn’t achieve in the previous 20 years around food,” said Cliff Burrows, Starbucks’ group president of the Americas, Europe, Middle East and Africa, as well as the Teavana brand.

The company is still in the early stages of rolling out a new breakfast food platform under the La Boulange brand, which Starbucks acquired last year.

The new La Boulange pastries are only in about 3,500 of Starbucks’ 7,000 company-owned locations in the U.S., and are not yet thought to be a significant driver of the increased food attachment seen during the fourth quarter. However, the La Boulange rollout is scheduled to reach all U.S. company stores by the end of 2014, and, where it’s available, consumers are showing “incredible excitement” around the updated pastry platform, said Burrows.

La Boulange lunch items — including soups, salads, paninis and other dishes — are being tested in Starbucks locations around San Francisco. The company is planning to roll out the lunch program next fall.

Starbucks is also testing handcrafted carbonated drinks in Atlanta and Austin, Texas, as well as Japan and Singapore, an addition to the menu that will also likely encourage even more food attachment, said Howard Schultz, Starbucks’ chair, president and chief executive.

The company’s move into the $100 billion soda category will leverage Starbucks’ expertise in customized retail beverages, said Schultz, who promised the chain would “deliver innovation and personalization to customers like no other industry participant ever has.”

Schultz noted that the proliferation of copycat versions of Starbucks’ popular Pumpkin Spice Latte have not cut into sales, and the drink remains the chain’s most popular seasonal beverage ever, with 200 million sold since its launch 10 years ago.

On Friday, Starbucks is scheduled to launch this year’s holiday products, including a gingerbread latte and a savory La Boulange almond croissant.

Same-store sales also rose 8-percent in China. And the region including Europe, the Middle East and Africa, known as EMEA, is showing signs of a turnaround, with same-store sales rising 2 percent.

Schultz called fiscal 2013 the best year in Starbucks’ 42-year history, saying the stellar results were a direct result of the focus on execution the company had in 2012.

At a time of continued macroeconomic headwinds, most restaurant companies are happy to be able to boast any positive same-store sales growth over multiple quarters. For Starbucks, the fourth quarter marked its 15th consecutive quarter in which comparable sales rose more than 7 percent in the U.S. and more than 5 percent globally.