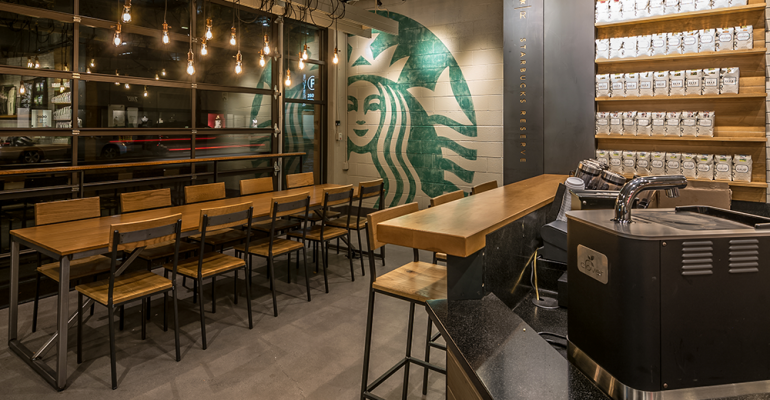 The United States and China will remain the key markets for Starbucks Corp. for the foreseeable future, the Seattle-based company’s CEO, Kevin Johnson, told investors during a conference call announcing third quarter earnings, which included 1 percent growth in same-store sales in the U.S. and a 2 percent drop in China comps.

“While acknowledging a disappointing Q3 [in China], I want to be clear that we have 100-percent confidence in our growth strategy and the sustainability of the leadership position we have built in the market,” he said.

“Having been in China since 1999, the strength of our brand, the trust we have built with our customers and partners, and our working knowledge of the many nuances of the China market uniquely positions us for continued long-term success.”

In fact, Belinda Wong, CEO of Starbucks China who joined the call from Shanghai, said the decline in same-store sales in restaurants in the comp set — those locations used to compare this past quarter’s sales to those of the 3rd quarter of last year — were largely attributed to the rapid opening of new locations that partly cannibalized sales from existing locations. The chain saw 60 percent more openings in the first half of fiscal 2018 than in 2017.

She acknowledged, however, that the chain was facing competition from upstart coffeehouses that were discounting heavily.

To combat growing competition, Starbucks is planning to introduce delivery in the large markets of Beijing and Shanghai this fall. Wong said the chain also was expanding its coffee-meets-ice-cream offering — Starbucks’ version of affogato, or ice cream with a shot of espresso — to 1,100 locations, double the current footprint. In June, Starbucks in China began allowing digital gifting via the popular digital platform Alipay, which Wong said currently has 520 million monthly active users.

Meanwhile, in the United States, although morning sales — Starbucks’ most important daypart — remained strong, afternoons were weak largely due to disappointing sales of the Frappuccino, the chain’s signature iced, blended beverage, which chief financial officer Scott Maw said were “well below what we forecast for the quarter.”

That was partly offset by an increase in sales of other cold beverages — including refreshers, cold brew, draft products and tea — which group president and chief operating officer Rosalind Brewer said now account for more than 50 percent of beverage sales, up from 37 percent five years ago.

“We are just beginning to explore some of our latest opportunities here,” Brewer said of cold beverages, including the new cold foam, an aerated skim milk product offered as a topping for cold brew. She said draft systems that allow them to offer items like nitro cold brew contributed to incremental sales, especially for the “occasional afternoon customer.”

She said she was also exploring multi-tap systems that would allow for more customization and innovation in tea and milk varieties.

Brewer said future expansion of Starbucks in the U.S. would focus on “Middle America” and the South, and that more than 80 percent of stores built in the next few years would be drive-thrus, “as data indicates significant opportunities for store expansion in higher growth, lower cost markets, especially when considering rising wages and occupancy cost.”

Looking ahead, Johnson said the “global coffee alliance,” that Starbucks and Nestlé S.A., announced in May, was on track to be completed in the fourth quarter and would accelerate sales of Starbucks products via Nestlé’s Nespresso and Nescafe Dolce Gusto platforms.

The company opened a net 511 stores in the quarter ended July 1 for a total of 28,720 locations across 77 markets.

This story has been updated to clarify that Starbucks' revenue was $6.3 billion for the quarter ended July 1, not the year.
TAGS: Finance Operations Beverage Trends
0 comments
Hide comments
Related
Sponsored