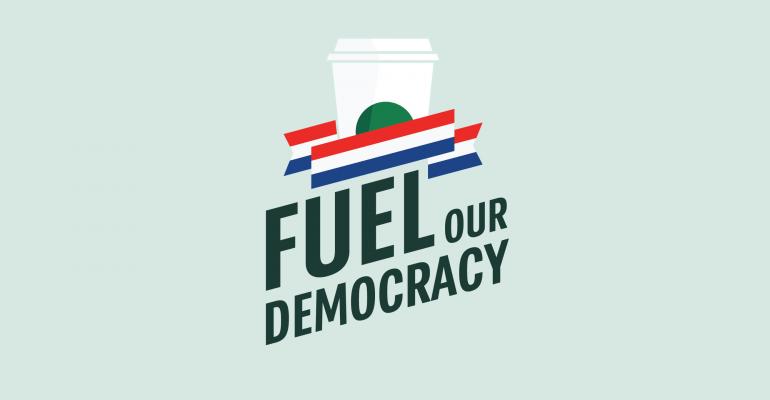 The coffee chain’s election program will also help employees register to vote and volunteer at polling places, as well as inform and encourage customers to vote during election season

Starbucks is giving all employees time off to vote on Election Day and supporting the right to vote for all in a new company-wide initiative called Fuel Our Democracy. With the initiative, Starbucks employees will work with their managers to “assure they have the tools and time” to register to vote, vote on Election Day or vote via absentee ballot. The company is also working with nonpartisan voter coalition Civic Alliance to allow Starbucks employees to further engage in civic duties by volunteering at polling sites.

“We know that barriers exist, notably in Black and Brown communities throughout the nation, that lend to systemic racism and require greater voter access and protections,” Starbucks CEO Kevin Johnson said in a letter to employees. “Through conversations between managers and nearly 200,000 partners, we’ll ensure you have the tools and the time necessary to register and cast your vote.”

Starbucks launched a portal for employees (which is also accessible to the public) called Starbucks Partners Vote that not only provides information on where and how to vote and how to volunteer at polling places, but also news and data on specific issues like police spending and reform, elder care, COVID-19 healthcare, and civil rights, provided by nonpartisan legislative news source, Countable News.

“You will hear about us partnering with civil rights groups, non-profits, governments and first responders who share our belief that every single human being—including Black, Indigenous and people of color—feels safe, welcome and respected,” Johnson said in the letter to employees. “You’ll also hear about other ways we are further using our scale for good in the communities we serve. The bottom line being: Starbucks will not wait for change, we will make change of our own.”

Starbucks is not the only company that is providing employees access to voter resources and time off to vote. In June, Washington, D.C.-based fast-casual pizza chain &pizza announced that they would be giving employees time off to vote on Election Day and has started a movement among its limited-service hospitality industry peers to declare Election Day a private holiday so all hospitality employees can have the time to vote. Earlier in August, Washington, D.C.-based salad and healthy bowl chain Sweetgreen announced that they would be giving employees up to three hours off on Election Day to vote and also developed a custom Sweetgreen voter registration panel for employees.

Other restaurant and hospitality companies, including Cava, the Delray Beach, Fla.-based Modern Restaurant Group, Lemonade Restaurant Group, and Ben & Jerry's have joined the Time to Vote movement, a nonpartisan coalition of companies that are pledging to help their employees find time off to vote in the upcoming election and beyond. More than 700 companies have joined the movement, which was formed during the 2018 midterm election season. Its founders say that with the ongoing global pandemic getting information on how to vote — whether on Election Day or through mail-in ballot — is crucial.

The headline of this story has been corrected to correctly reflect that Starbucks is allowing employees schedule flexibility, not giving them time off
TAGS: Marketing Operations
0 comments
Hide comments
Related
Sponsored