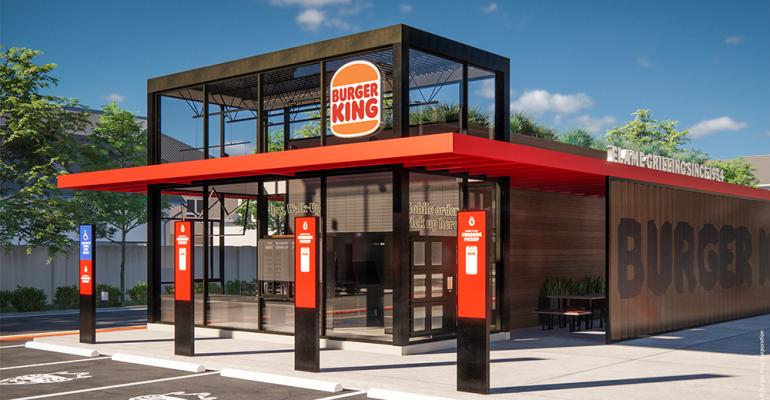 Restaurant Brands International (RBI) is doubling down on its remodeling efforts at Burger King.
News>Quick Service

Company plans to focus on remodels while ramping up loyalty programs, digital menuboard use

Restaurant Brands International (RBI) is doubling down on its remodeling efforts at Burger King, scaling up its digital initiatives across all of its brands and continuing to explore menu innovation opportunities, executives said during the company’s second-quarter earnings call on Friday.

“Digital is a key focus area as we enhance the omnichannel guest experience with loyalty and other initiatives to form deeper, long-term relationships with our guests,” said José Cil, CEO of RBI. “In our home markets, digital sales are up 60% year-on-year, and we think this is just the beginning.”

Overall RBI reported 31.9% systemwide sales gains for the three-month period ended June 30. Systemwide sales were up double digits at all three brands, although comps fell slightly at Popeyes Louisiana Kitchen compared with last year’s second quarter, when comps were up a robust 24.8%.

Among the digital initiatives that RBI is ramping up are loyalty programs now in place at all three brands, including the recently launched Royal Perks program at Burger King and the Popeyes Rewards initiative. The Tim Hortons loyalty program, Tims Rewards, is more advanced and is providing a roadmap for the rollout at the company other two brands, the company said.

“We continue to see great progress, which we think will be a big ‘unlock’ as we continue on our journey to build a strong and growing digital sales base,” said Cil.

Also important to RBI’s digital initiatives are its outdoor digital menuboards, which in limited rollout at Burger King have driven comparable-store sales gains compared with static menuboards, said Joshua Kobza, RBI’s chief operating officer. The digital menuboards incorporate dynamic suggestive selling, including recently expanded functionality that promotes either hot or cold drinks depending on the outdoor temperature at the time, for example.

The company aims to have the outdoor digital menuboards at 10,000 North American restaurants by the middle of next year, Kobza said.

The menuboards are a key focus of the remodeling program at Burger King, which Cil said needs to be accelerated. He said he met with 30 of the chain’s largest franchisees in recent weeks to discuss opportunities to elevate the brand’s competitiveness in the market.

“We haven’t put enough focus on the few priorities that will have the biggest impact, and we haven’t moved fast enough on these priorities to accelerate the business to the level I know we are capable of,” he said.

Improving capacity and throughput in the chain’s drive-thrus and double drive-thrus will be one key area of focus, Cil said, and the chain also plans to unveil menu innovations in underperforming dayparts, including breakfast. He said the hand-breaded Ch’King Sandwich line has been a success, citing its ability to attract new customers with higher incomes and more spending power. At the same time, price-oriented propositions such as the Dollar Your Way Value Menu have also driven traffic.

Restaurant-level execution is a concern at Burger King, he said, and the company is seeking to address this with increased training. Recent corporate hires in both operations and marketing will also help, he added.

At Popeyes, Cil said he sees potential in the new Chicken Nuggets product, which offers the same elevated quality that has driven the success of the chain’s chicken sandwich. The Chicken Nuggets also play a valuable role driving business in three ways, he said: attracting families and children, adding a snack component to the menu that had previously been lacking and driving traffic in the historically slower afternoon daypart.

Ads supporting the new product were set to roll out in the first week of August.

Tim Hortons, meanwhile, has been ahead of Burger King and Popeyes in its digital rollout, but has struggled to drive sales gains as Canadian restrictions on indoor dining have remained in place far longer than in the U.S.

The chain has seen strong customer response to new menu items, however, including its first cold brew coffee, which launched in May, and its new Tims Real Fruit Quenchers. Cil also said that its new Fresh Cracked Egg sandwiches have performed well.

Systemwide sales growth was up 33% at Tim Hortons, to $1.64 billion, compared with a 33.4% decline in last year’s second quarter. The chain grew comparable sales by 27.6% and restaurant count by 2.7%, ending the second quarter with 5,065 locations.

RBI opened 378 net new restaurants in the first half, and Cil said he was bullish on ongoing global expansion, citing international opportunities for the Tim Hortons and Popeyes brands in particular as the company strives to reach its goal of 40,000 restaurants around the world.