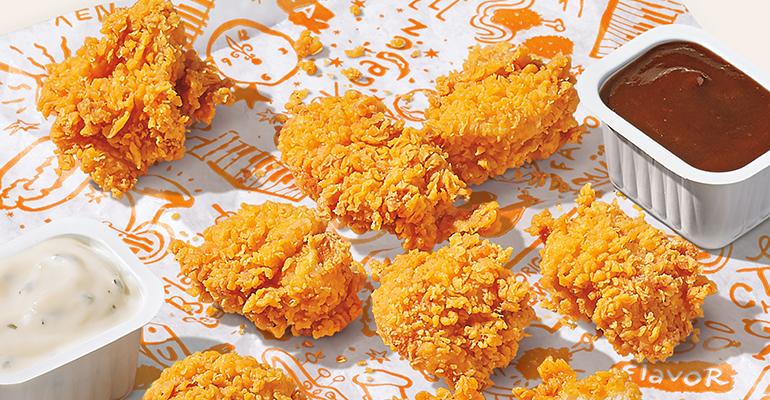 Popeyes has not had Chicken Nuggets on its menu since 2012, though it has since offered Popcorn Chicken as part of a meal deal.
News>Quick Service

Popeyes Louisiana Kitchen will be adding new Chicken Nuggets to its menu on July 27 at stores in the United States, Canada and Puerto Rico, the company announced this week.

The division of Toronto-based Restaurant Brands International Inc. said the new Chicken Nuggets are seasoned, buttermilk-battered and fried like the Popeyes’ popular chicken sandwich, which was introduced in 2019.

“Just like our game changing chicken sandwich, our new Chicken Nuggets are unlike anything you may have experienced before. We aim to show the world once again the magic of Popeyes chicken with our new nuggets,” said Sami Siddiqui, president of Popeyes Americas, in a statement

Popeyes has not had Chicken Nuggets on its menu since 2012, though it has since offered Popcorn Chicken as part of a meal deal. The nuggets were earlier tested in some markets in Arkansas, Connecticut, Ohio and Texas.

“Popeyes has previously served chicken nuggets on its menus in the ‘80s and in 2012, however, it was a different chicken recipe and was served for a limited time,” a Popeyes spokesperson said in an email. “This is the first time this new recipe will be served nationwide.”

The company said the white-meat chicken nuggets use the sandwich recipe, which marinates the meat and uses a special flour and batter system to provide the perfect crispy texture. The nuggets are served with Popeyes’ signature sauces, which include Bayou Buffalo, BoldBQ, Blackened Ranch, Buttermilk Ranch, Mardi Gras Mustard and Sweet Heat.

The new nuggets will be available in-store, on the website or through the Popeyes smartphone app, with options ranging from four pieces to 36 pieces. Customers can also purchase the 48-piece option, available exclusively online at Popeyes.com and on the Popeyes app. In test, prices ranged from $3.69 to $19.99.

“We have invested the time to perfect a product that leverages our classic techniques and Louisiana flavors that will change how people think about and experience Chicken Nuggets,” said Amy Alarcon, Popeyes vice president of culinary innovation.