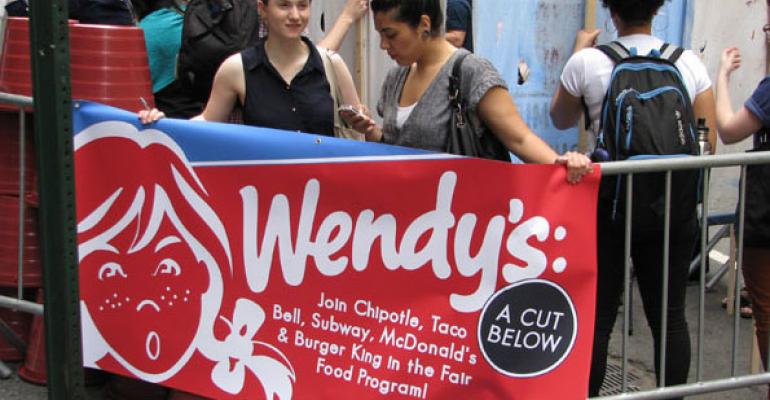 Scores of protesters gathered outside Wendy’s annual stockholders’ meeting in New York Thursday calling on the quick-service chain to help improve wages and working conditions for both tomato farm workers in Florida and hourly restaurant workers at the chain’s more than 5,800 domestic units.

Two labor groups — the Coalition of Immokalee Workers and Fast Food Forward — held rallies in front of the Sofitel Hotel on West 44th Street where Wendy’s executives and company shareholders were gathered for their annual meeting.

At the same time, a similar labor-related rally was staged at the “Rock n’ Roll” McDonald’s on Clark Street in downtown Chicago, after which about 100 participants were bussed to the chain’s headquarters in Oak Brook, Ill., for its annual shareholders’ meeting.

This new wave of actions follows a series of highly publicized strikes and rallies held by quick-service workers in New York, Chicago, Detroit, Saint Louis and Washington, D.C., in which participants demanded $15 per hour in wages and the right to unionize at their respective restaurants “without fear of retaliation.”

Jonathan Westin, organizing director of New York Communities for Change, one of Fast Food Forward’s chief strike organizers, said the workers’ movement is gaining ground across the United States. “The majority of fast food workers are still being paid minimum wage while the companies themselves make huge profits,” he said.

Speakers in New York rallied participants, who chanted, “We can’t survive on $7.25,” and “Hi hi, ho, ho, these poverty wages got to go.”

Shannon Willis, a Wendy’s employee in New York, addressed the rally, saying he makes $7.25 an hour and can’t pay his rent or take care of his family on his pay. “It’s not enough,” he said.

In Chicago, protesters also heard speakers and supporters call for higher wages and improved working conditions. “We’re here to deliver a message,” said Victor Guzman, a McDonald’s employee and a member of the Workers Organizing Committee of Chicago, in a statement. “We’ve delivered it by marching, we’ve delivered it by going on strike, and now we’re delivering it directly to the shareholders. We demand $15 and the right to organize a union without retaliation.”

The Wendy’s Co. also came under fire from protesters in New York when the Coalition of Immokalee Workers, a farm workers organization based in Florida, assailed the Dublin, Ohio-based chain for refusing to join the Fair Food Program, a corporate and social responsibility agreement for Florida tomato pickers.

Participants rebuked Wendy’s officials for declining to participate in the program, which had already been signed by McDonald’s, Burger King, Taco Bell and Subway. The Fair Food Program is aimed at improving wages and working conditions for Florida farm workers and calls for a stricter code of conduct for suppliers concerning labor rights. Participating restaurant chains agreed to pay an extra penny per pound for tomatoes grown in Florida.

Speakers accused Wendy’s of not signing on to the program, even though chief executive Emil Brolick was CEO of Taco Bell in 2005 when the Yum! Brands Inc. fast feeder became the first major U.S. chain to become part of the agreement.

Speaker Kerry Kennedy, daughter of Robert Kennedy and president of The Robert F. Kennedy Center for Justice and Human Rights, praised the CIW for making “extraordinary progress” and urged Brolick to sign the agreement.

Responding in a statement, Wendy’s said, “Because of our high standards, we pay a premium to our tomato suppliers in Florida, and we expect them to take care of their employees. All of our Florida tomato suppliers participate in the Fair Food Program, and are required to operate in a way that is safe and lawful for their workers.”

However, in statement issued after the shareholders’ meeting, Gerardo Reyes Chavez of the CIW called Wendy’s comments “misleading,” and said, “Wendy’s is not participating in the Fair Food Program but its CEO has claimed in front of its shareholders that it does,” explained Reyes Chavez. “Wendy’s has not signed a Fair Food agreement with the CIW. Wendy’s is not paying a penny premium to increase workers’ pay. And Wendy’s has not committed to using its purchasing power to eradicate abuses in the fields together with growers and farm workers. Saying that Wendy’s is participating in the Fair Food Program when it is not it undermines the concrete commitment and contributions of the 11 corporations that actually are participating and creates a misleading picture for its shareholders and customers.”

McDonald's also responded to the protests with a statement. "Both our company and franchised-owned restaurants work hard every day to treat McDonald's employees with dignity and respect," the company said. "Employees are paid competitive wages and have access to a range of benefits to meet their individual needs."

On Saturday, prior to Thursday’s protest, about 300 participants marched through lower Manhattan to two Wendy’s locations, urging the chain to become part of the Fair Food Program.