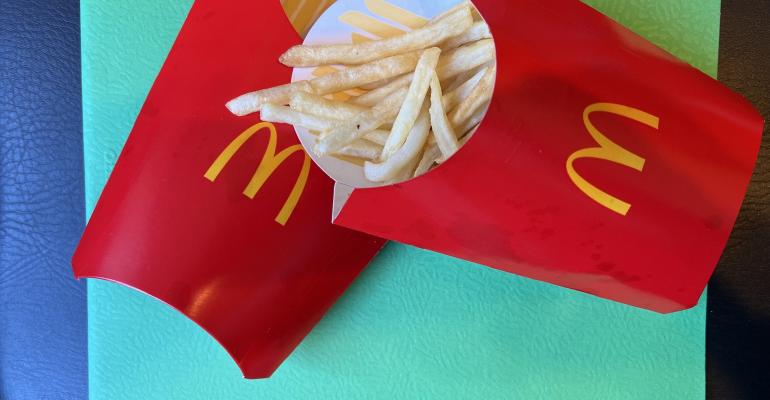 The finding of potentially toxic levels of “forever chemicals” in restaurant packaging by Consumer Reports last month has unleashed what some predict will be a wave of lawsuits — despite efforts by restaurant chains to phase out use of the toxins.

At least two lawsuits filed in late March targeted McDonald’s Corp., and one filed in early April focused on Burger King. Attorneys say both the recent report and growing regulatory activity barring the use of per and polyfluoroalkyl substances, or PFAS, in consumer products will likely spark a rise in class-action filings.

PFAS refers to a category of some 9,000 substances that are used to make paper or containers more grease resistant. Called “forever chemicals” because they virtually never break down, the chemicals are also used for nonstick cookware, as a flame retardant and for waterproofing clothing. For years, lawsuits have cropped up around the country involving PFAS in drinking water and cosmetics.

In a report in March, Consumer Reports tested more than 100 packaging products from 24 large national restaurant chains and grocery stores, finding that nearly half had at least one product with high PFAS levels in some items, including Arby’s, Burger King, Cava, Chick-fil-A, McDonald’s, Nathan’s and Sweetgreen.

Restaurant chains, however, say they have already begun efforts to phase out packaging that has PFAS, and some accelerated their efforts following the Consumer Reports article. But, given supply chain challenges across the industry, the switch to packaging with lower PFAS levels could take time.

The lawsuits filed against McDonald’s and Burger King seek class-action status and are similar in their arguments. Rather than saying exposure to PFAS has caused specific harm, which would be more difficult to prove, the lawsuits charge the restaurant brands with fraud, misrepresentation and false advertising for claiming the food they serve is safe.

In a lawsuit filed March 28 in the U.S. District Court for the Southern District of Illinois, for example, plaintiff Larry Clark charged McDonald’s Corp. with exposing American consumers to high levels of PFAS in product packaging, arguing that exposure is most dangerous for young children and pregnant women. In the complaint, Clark refers to a “host of health effects associated with PFAS” outlined by the Centers for Disease Control and Prevention, including cancer, liver damage, decreased fertility and increased risk of asthma and thyroid disease.

In the complaint, Clark charges McDonald’s with fraud and deceptive business practices, among other charges, for violating its food-safety pledge.

Similar allegations are made in a lawsuit filed on March 30 by plaintiff Ken McDowell, who lives in California but sued McDonald’s Corp. in the U.S. District Court for the Northern District of Illinois, because the chain is based in Chicago.

On April 11 in U.S. District Court for the Northern District of California, plaintiff Azman Hussein sued Burger King Corp. with a similar complaint, pointing to the chain’s recent efforts to promote its use of “real ingredients” with “no secrets,” and sustainable packaging.

Neither McDonald’s nor Burger King immediately responded requests for more comment on the lawsuits. Both companies,  however, have pledged to eliminate PFAS from packaging by 2025 or sooner.

In a recent blog post, attorneys with the law firm BakerHostetler predicted more personal injury class-actions against fast-food restaurants and food packaging manufacturers will arise, in part because of a ruling in an Ohio federal court involving a drinking water case against chemical manufacturer DuPont that certified a class-action to include state residents with PFAS in their bloodstream.

The case is under appeal, the blog notes, but the plaintiff’s attorneys successfully convinced the court to see PFAS as similar to asbestos and tobacco — two of the largest personal injury actions in U.S. history — which “could have significant consequences for how subsequent PFAS class actions are litigated and defended,” the blog said.