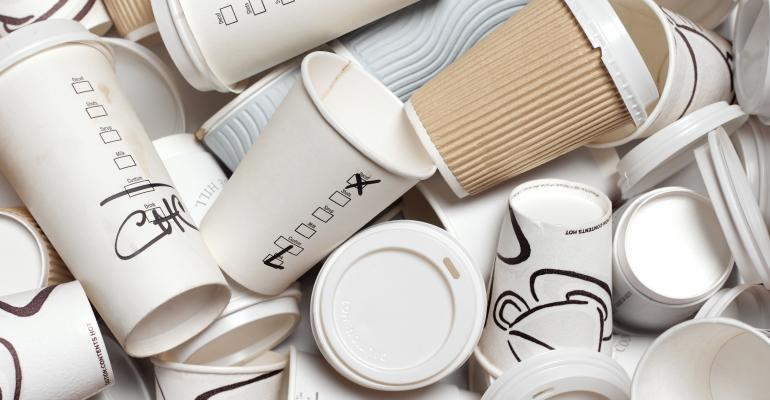 As global supply chain chaos continues to rattle world economies, one product category has become a bane for restaurant operators across the industry:

It was a problem that began in 2020, when the pandemic shutdown forced most restaurants to turn to off-premises solutions, creating huge seemingly overnight demand that strained the to-go packaging supply chain.

Since then, it has only gotten worse, operators say. Even with dine-in consumers largely back, restaurants across segments continue to see demand for off-premises dining. Meanwhile, the perfect storm that has created worldwide supply chain disruption has restaurant operators struggling mightily to source everything from chicken wings to cooking oil.

Topping the list of product shortages, however, is to-go packaging, according to research firm Datassential, which surveyed restaurant operators about their supply chain woes in July. More than 50% of respondents said they have experienced shortages or unavailability of to-go packaging.

And 72% said the cost of that packaging is increasing — and increasing a lot. To-go packaging was second only to beef among products that have seen the largest price inflation over the preceding three months.

And while it used to be common for prices to go up as packaging contracts were renewed, now Failing said price hikes are less predictable.

“Now we’re getting a call on a Friday that prices are going up 30% on Monday,” he said.

And that’s if the packaging can be obtained at all, said Failing. “A month ago, I got a call from a distributor saying, ‘We thought we could get 100 of your containers, but now we can’t.’”

Failing said his restaurants have been forced to make do, finding generic takeout boxes where they can or at one point using giant catering containers.

Those who are more sustainably minded, like Failing, have put aside the quest for more eco-friendly packaging solutions for the time being, saying, “It’s whatever you can get right now.”

The packaging shortage is a result of the same factors threatening most commodities: back-up at the nation’s ports, the lack of truck drivers to move product to warehouses, and the labor crisis that impacts speed at every step of the process.

Those force are largely beyond the control of packaging suppliers, said Natha Dempsey, president of the Foodservice Packaging Institute, based in the Washington, D.C. area.

“It’s not one particular thing, it’s all of it,” said Dempsey. “I think everyone in the supply chain is getting squeezed one way or another.” 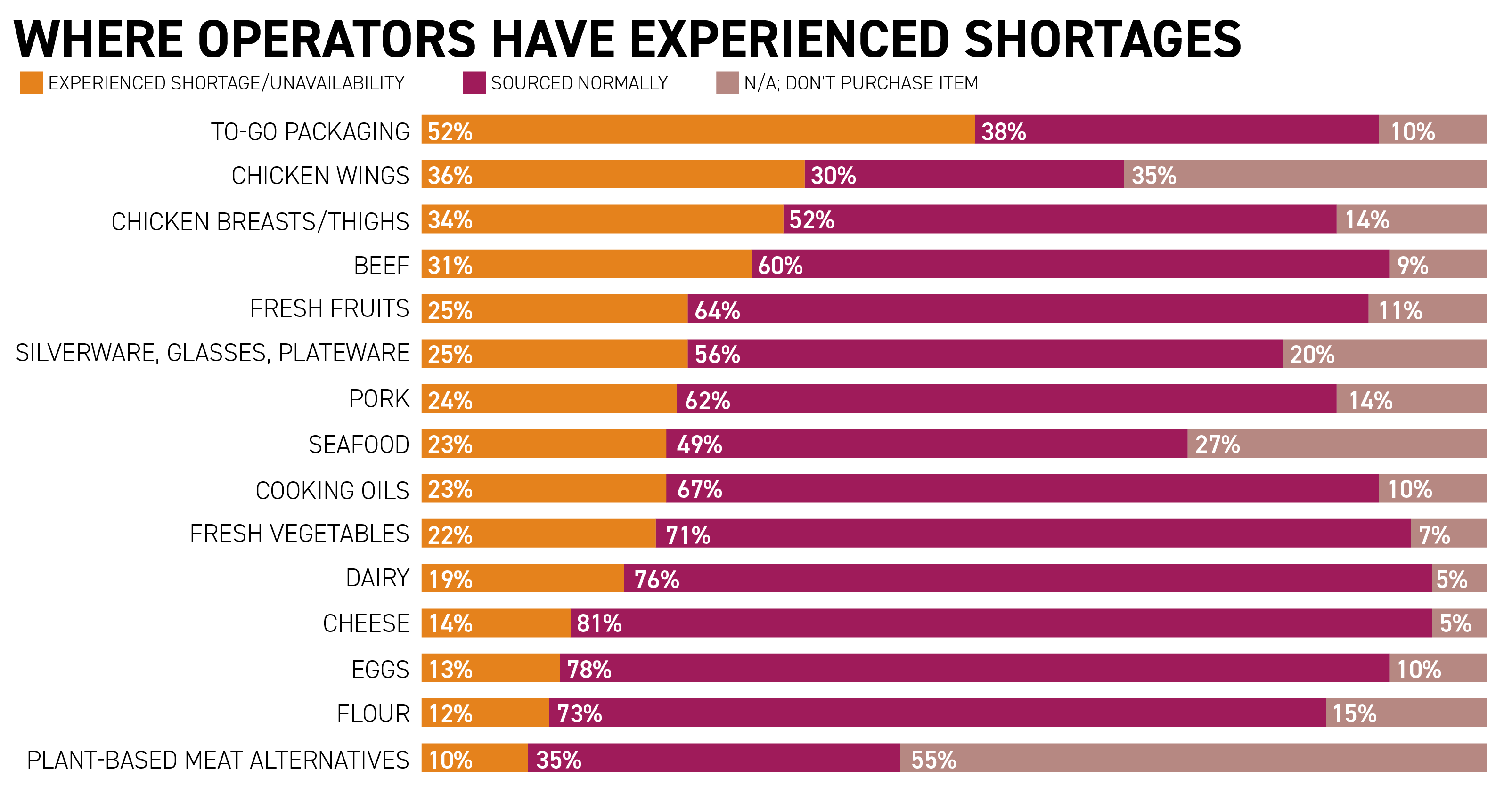 The mega storms over the summer also impacted the supply of plastic resin and paperboard for manufacturers in the U.S., she said. And shifts in restaurant demand have also added to the instability. “When a restaurant switches up their menu, their packaging needs change,” she said.

The cost of packaging has certainly been impacted, though the amount depends on the product and buyer. Smaller buyers tend to have a harder time sourcing packaging than big purchasers, but all are seeing rising costs.

Each year, the Institute asks foodservice operators what’s most important to them about their packaging, and “performance” usually tops the list, followed by “appearance,” then “cost,” said Dempsey.

This year, however — for the first time in 11 years — operators said “cost” was the No. 1 priority.

“When you’re willing to sacrifice performance for cost, that says something,” said Dempsey.

The scramble for packaging comes at a time when restaurants are trying to up their off-premises game, creating branded materials to improve the takeout and delivery experience.

But for many, that effort has also been put on hold. 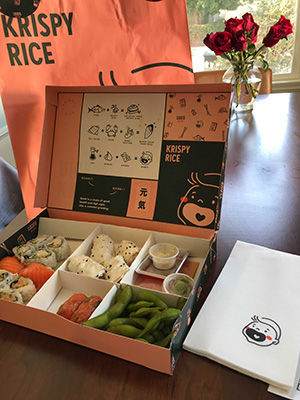 Photo: At a time when many companies have developed branded packaging for delivery, some have been forced to make do with more generic products.

Some manufacturers are dropping the ability to customize packaging, said Kris Piatek, president of Auburn Supply Group, based in Milwaukee, which is both a supplier and distributor.

“Restaurants and other businesses that used to do branding on their products, like logos on cups and bags, etc., a lot of them lost the ability to do that entirely,” said Piatek. “Not only are there delays with production, but in a lot of cases the manufacturers just walked away from what they used to do for these companies.”

Auburn Supply Group is still able to offer customization for its recently launched “tree-free” to-go bag made of bagasse, a byproduct of sugarcane production, which is manufactured in South America. Piatek said the bags have less transit time than those coming from Asia, and the company has been able to go through ports that are less congested. 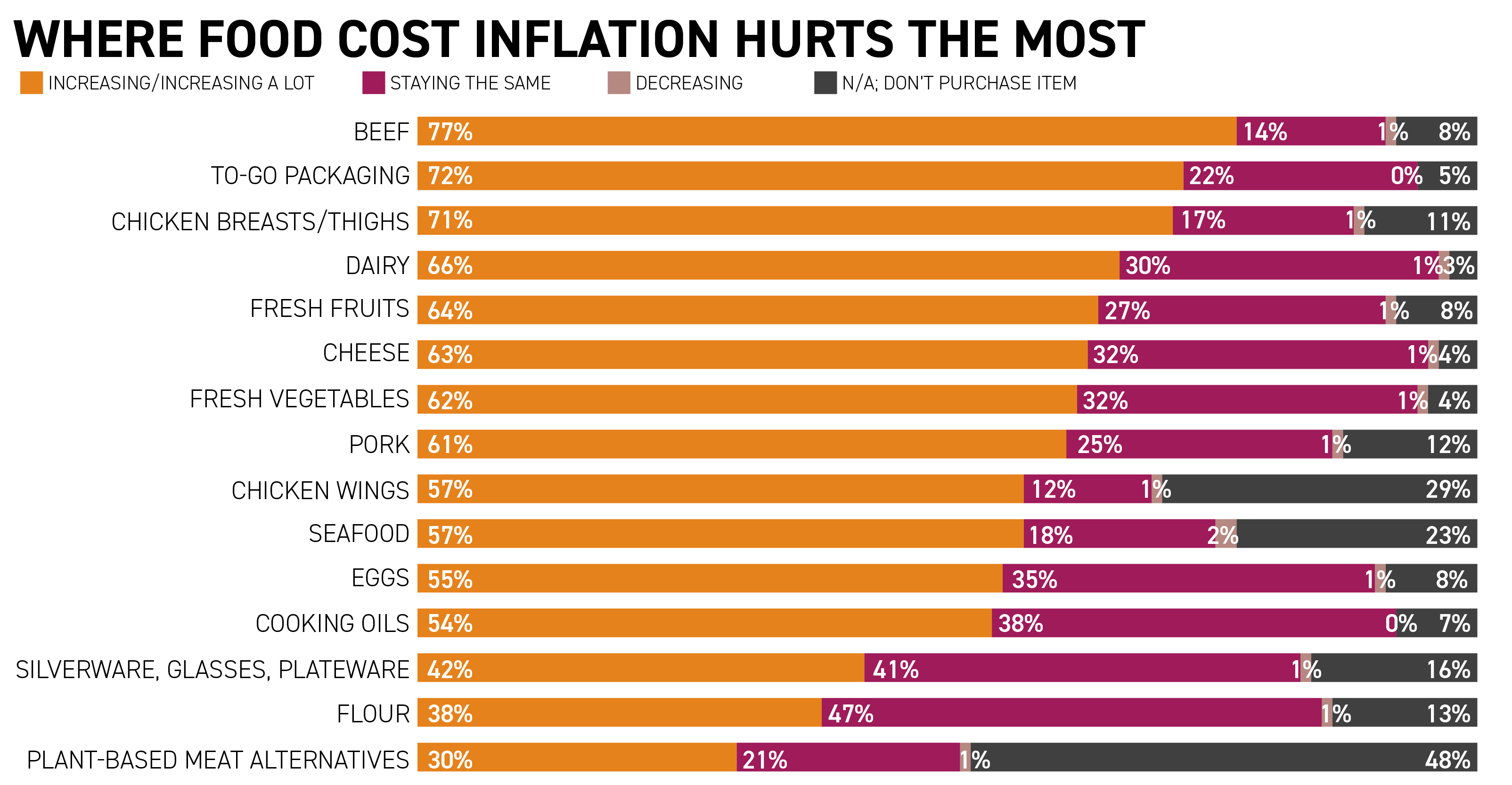 When will it end?

Piatek said it’s difficult to say when shortages will ease, though he’s optimistic about spring 2022.

Analysts say supply chain disruptions can be relatively transitory, but the topic is likely to come up in the upcoming earnings season.

And coming down the pike are regulatory factors that will further challenge the packaging supply chain.

In California, for example, Gov. Gavin Newsom recently signed a bill that will soon update requirements for packaging labeled “compostable,” and the legislation bans the use of toxic “forever chemicals” — per- and polyfluoroalkyl substances, or PFAS — now commonly used in foodservice packaging, starting in 2023.

The U.S. Environmental Protection Agency on Monday also announced plans to address PFAS contamination nationwide, which is expected to result in regulations on use of the cancer-causing chemicals in a wide range of products, including possibly food packaging.

Meanwhile, the 29-unit Velvet Taco chain is waiting for a load of to-go bags that are “sitting off the port in Long Beach, Calif.,” said Clay Dover, the taco chain’s president and CEO.

The rapidly growing Dallas-based chain is planning to reach 40 units by the end of 2022, and his packaging needs will also grow.

But, like other chains, Velvet Taco has seen sporadic supply of plastic go-box lids and taco liners. Dover said his restaurants are making do with generic replacements without branded materials, or in some cases putting trays into boxes for to go.