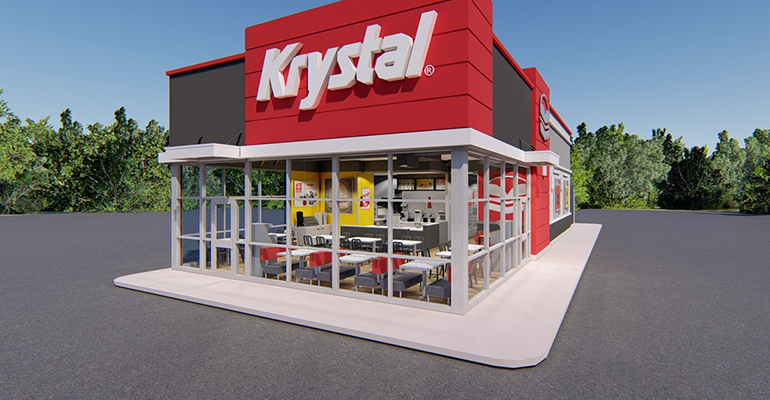 The Krystal Company this past week pulled the wraps off a new prototype in Jackson, Miss., that executives say squares the brand with modern customers’ needs.

The new restaurant opened softly in Jackson, Miss., replacing a unit built in the 1970s, and is the first of five under the new format planned this year, said Paul Macaluso, Krystal president and CEO, in an interview.

“A lot of our prototype updates are in response to changing consumer needs,” Macaluso said. “There’s more focus on the drive-thru, a lot of efficiencies in kitchen design so we can service the drive-thru more quickly, and we’ve expanded the space at the drive-thru window so more people can work there.”

Krystal is shaving square footage in the new building as well. The Jackson prototype is 1,788 square feet compared to older units that ranged between 2,000 to 2,500 square feet.

“It’s an 86-year-old brand and more than half our restaurants are more than 40 years old, so we have a lot of older facilities, Macaluso said. “More people used to come in and sit down, and they are no longer doing that.”

Seating for the Jackson unit is 36 to 46 compared to an average of 75 seats in older units. The proportion of kitchen space was also increased.

The new design also allows for more and larger windows. The company also expects between 30 percent and 40 percent energy savings with high-efficiency air-conditioning systems and light-emitting diode lighting insides and out, Macaluso said.

The Jackson drive-thru also features two kiosks for ordering, which can shave off 20 to 30 seconds off the wait time, Macaluso said. “It’s an investment for the second menu board and the second speaker box,” he added, “but we think that’s a worthwhile investment.”

The scrape-and-build program for the new prototype units require about 120 days for demolition and construction, Macaluso said. “A lot of these are still viable trade areas, so employees are moving to other restaurants during the rebuild,” he said.

Macaluso said the new restaurant prototype, aspects of which were incorporated into a rebuild 18 months ago in Marietta, Ga., is part of revitalization for the brand, which debuted in 1932 in Chattanooga, Tenn.

“This is the first of between 50 and 100 new restaurants over the next five years,” he said. 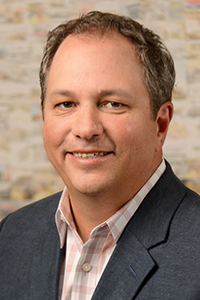 Along with the new prototype, the company is also working on the brand positioning under new Krystal chief marketing officer Dominic Losacco (left), who worked with Macaluso at Moe’s Southwest Grill

“Brand accessibility is a big part of the campaign,” said Losacco, who added that advertising was moving toward a more digital base and the new restaurant design featured elements such as 10-seat communal tables in the restaurants.

The company has introduced a new “Live a Little” advertising campaign for the quick-service brand that relies on social and digital platforms and promotes the #SquareTalk hashtag.

“#SquareTalk is more than a play on words about our iconic square burgers,” Losacco said. “It means Krystal gives it to you square and simple in a way that other QSRs can’t.”

Krystal, owned by the Atlanta-based Argonne Capital Group LLC since 2012, has 362 restaurants in 11 states.