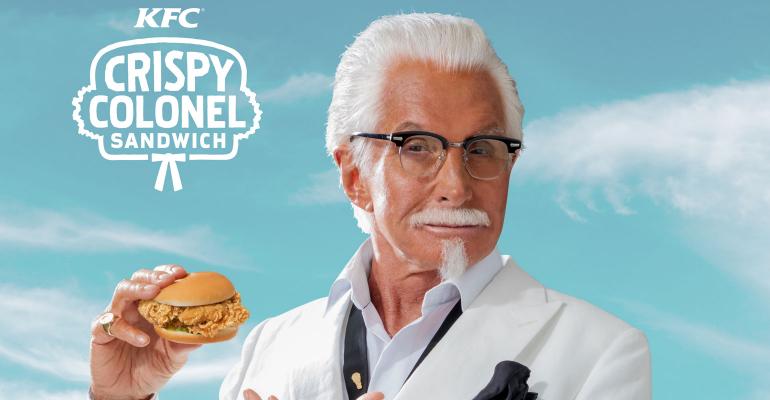 After a two-year hiatus, George Hamilton — and his signature suntan — are back at KFC. “With his leading-man looks and signature suntan, he brought crunchy, juicy, hand-breaded Extra Crispy chicken (and fried chicken-scented sunscreen) to Americans,” KFC said in a statement on Friday. “Now he's bringing it to Americans in a portable version.”

The Crispy Colonel, tested in Tampa and Jacksonville, Fla., for about eight weeks, is a hand-breaded chicken filet served on a bun with mayonnaise and pickles. The sandwich, which rolls out nationwide on April 23, will be available in other flavors, including Smoky Mountain BBQ, spicy and smoky Nashville Hot, and sweet and tangy Georgia Gold honey mustard BBQ. KFC has offered sandwiches in the past, including the Zinger and Double Crunch, as well as Chicken Littles, which are currently available. The Crispy Colonel is the newest addition.

In a teaser, KFC said it plans to announce, “a fourth, unexpectedly delicious flavor as a Crispy Colonel sandwich for a very limited time.”

Hamilton, last seen in 2016 hawking fried-chicken-scented sunscreen for KFC, returns in an ad campaign. He is shown living a leisurely life at sea while eating the new, portable crispy chicken sandwich. His yacht is aptly named The K.F.Sea. Beginning April 23, the sandwich will be available at participating U.S. restaurants in a $5 Fill Up combo box that includes wedges, a cookie and a drink. The flavored sandwiches will be available as a combo for a slight upcharge of $5.99.

The sandwich is priced at $3.99 à la carte for the classic option and $4.49 for any of the flavored sandwiches.

Correction: April 20, 2018  An earlier version of this story misstated the availability of the Crispy Colonel sandwich. It has been updated.