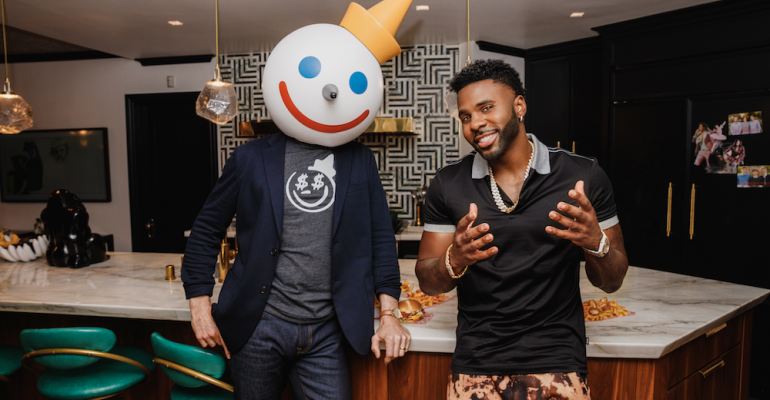 Jack in the Box has partnered with pop star Jason Derulo for a virtual pop up.
News>Quick Service

Jack in the Box has teamed up with pop star and TikTok sensation Jason Derulo to launch a virtual pop up in Los Angeles, offering menu items inspired by the Milli Meals that Derulo makes in celebration every time he gets another million followers on the social media platform.

Food from the One in a Milli Virtual Restaurant is available in select areas of Los Angeles via Uber Eats through June 28.

Related: Jack in the Box CIO Carlson Choi departs after about one month

Derulo’s Milli Meals tend to involve unusual combinations of snack foods, such as the Ruffles Rice Krispies Candy Cake Treat he made when he hit 40 million followers.

The virtual pop up’s five items were created in collaboration between Derulo and the quick-service burger chain based in San Diego.

Jack in the Box is also using the promotion to drive use of its mobile app. For customers outside of One in a Milli’s delivery zone, guests can order the Milli Meal for $10-$11, depending on the location, via the app through August 8.

Customers who order the meal via the app are entered to win a prize, including custom sneakers inspired by Jack Box’s shoes in a recent commercial with Derulo, One in a Milli clothing, memorabilia signed by Derulo, and Jack in the Box gift cards. Two winners will be chosen each week.

The menu items at the virtual pop up are:

“I’m pumped to be teaming up with Jack in the Box to celebrate my next million of TikTok followers!” Derulo said in a release announcing the promotion. “Jack in the Box is my guilty pleasure, so this partnership was an opportunity to bring my larger-than-life Milli Meals in a unique way, through creation the first-ever One in a Milli Virtual Restaurant. With Jack’s menu variety, we curated the ultimate spread that includes five deliciously indulgent items. Fans will be able to test out our concoctions for the first time only on Uber Eats. We’re excited for you to try what we’ve cooked up!”

There are more than 2,200 Jack in the Box restaurants in 21 states.