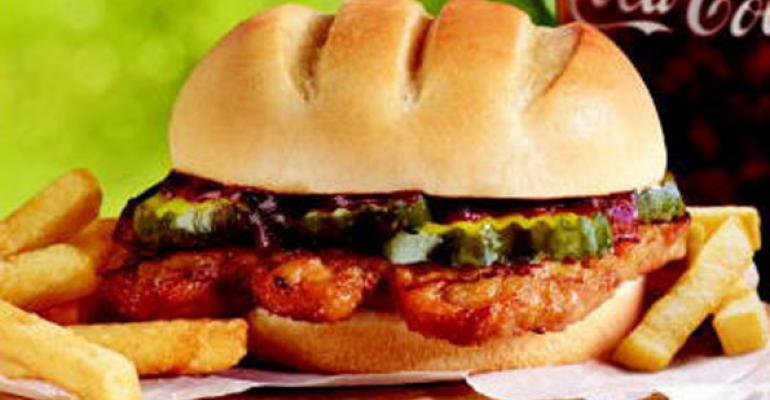 It is shortsighted to look at the BK Rib as only a copy of McDonald&#39;s McRib, says one analyst.

As soon as Burger King announced a BK Rib Sandwich as part of its upcoming limited-time summer menu the inevitable comparisons to McDonald's McRib began rolling in.

Many consumer-facing news outlets, including USA Today and the Los Angeles Times, noted the similarity between Burger King's new offering, made with a boneless rib patty, sweet barbecue sauce and pickles on an artisan bun, and McDonald’s now-iconic sandwich.

But to say that the BK Rib Sandwich is solely a copy of the McRib would be a bit shortsighted, said Chris Miller, an executive vice president at foodservice research firm Sandelman & Associates. He noted that the new item is actually right in line with Burger King's summer 2012 LTO launch.

“Burger King had laid the groundwork for [releasing the BK Rib Sandwich] by doing a barbecue event last summer, which worked for them,” he said. “They have established some credibility with barbecue and pork.”

Last year's summer LTO lineup included a number of sandwiches incorporating barbecue versions of its burgers, plus sweets and sweet potato fries. Burger King is bringing a number of those items back, including the Carolina BBQ Whopper and BBQ Whopper Jr., for another barbecue lineup this summer.

Eric Hirschhorn, vice president of innovation at Burger King, said in an email that the rib sandwich was intended to be an addition to the company’s summer barbecue portfolio. “Every classic barbecue menu comes with ribs, which is why we felt the need to offer our very own version of it — the BK Rib Sandwich,” he said.

The McRib, which has been around for more than 30 years, isn’t replicable at this point because it has become a quick-service classic, Miller said.

“The McRib is a unique phenomenon,” he said. “But that doesn’t mean Burger King’s foray won’t be successful.”

The key for the product’s success at Burger King will be in the branding, Miller said. The company should continue to own the rib sandwich as part of its barbecue offerings rather than positioning the offering as a direct competitor to the McRib, despite the comparisons.

If comparisons are drawn between the rib sandwiches, ultimately, consumers will gravitate toward whichever rib sandwich tastes better, is at a better price and is perceived as a better value, said Danny Bendas, managing partner at Synergy Restaurant Consultants.

However, Bendas said it is clear Burger King has been playing catch-up with McDonald’s in recent years. “McDonald’s has done a really good job with innovation,” he said. “At some point [Burger King] has to do its own thing rather than copycatting…long term, I don’t think it’s a good strategy.”

Miller noted that Burger King has focused on targeting men and “super fans” with its brand position, using the Burger King “King” in commercials and making burgers the focus. Meanwhile, McDonald’s was aggressively broadening its menu to appeal to a wider range of consumers, he said.

When Burger King’s male-centric image ran out of steam, they had to follow suit, Miller said. “McDonald’s has done so many things [with their menu] that there aren’t that many things you can do that they haven’t done,” he said.

Danya Proud, a spokeswoman for McDonald’s, said in an email that the company doesn’t release sales numbers for specific products, including the McRib. However, in an email she said, McDonald’s customers “love it.”

In response to Burger King’s foray into the McRib’s territory, Proud said: “We remain focused on our business and our customers. We know our customers love McRib and we won’t disappoint them. It will be returning.”

Burger King's limited-time summer menu, which includes the BK Rib Sandwich, will be available at participating locations starting May 21.

In 2010, Burger King tried adding actual bone-in ribs to its menu. The ribs were available as part of an eight-piece combo for a suggested $8.99. The ribs were eventually removed from the menu due to low sales.