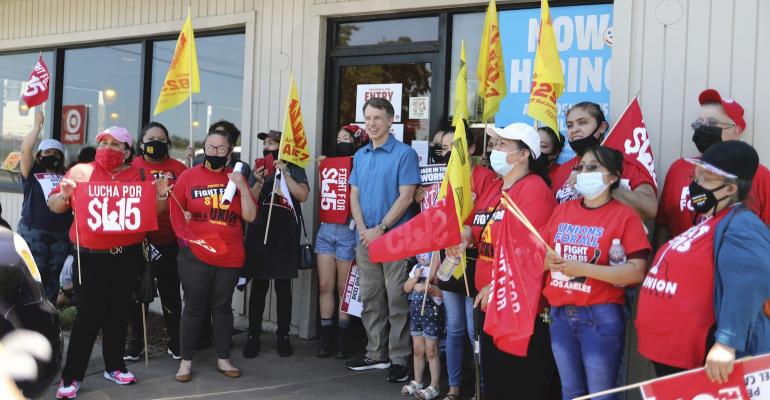 As Jack in the Box workers rally in California, a consultant offers operators strategies

As parts of the nation experienced blistering temperatures, including a record high 116 degrees Monday in Portland, Ore., restaurant operators faced increased issues in providing employees with a safe work environment.

About 12 million U.S. residents in the West on Tuesday were under heat watches and warnings, and another 44 million were under heat alerts across the Northeast, stretching from Maine to Delaware.

In Sacramento, Calif., Jack in the Box workers held a rally and car caravan Tuesday to demand their managers take steps to guarantee a safe and healthy workplace, including the repair of a faulty air conditioning unit that had broken during previous heat waves.

In a formal complaint filed with the Sacramento County Department of Public Health and the California Division of Occupational Safety and Health, or Cal/OSHA, workers at the Madison Avenue Jack in the Box raised alarms with city and state officials about conditions at the restaurant, which representatives said they had raised earlier with a manager.

“She said we were exaggerating and hot because of menopause,” the workers wrote in their complaint. “But it was 107 degrees on June 17th and 109 on June 18 and we had no AC.” The complaint said the manager cited “the responsibility of upper management to fix the problem, and they have not authorized replacement of an expensive part, only temporary repairs.”

A spokesperson for San Diego, Calif.-based Jack in the Box Inc. said in a statement late Thursday: “We take the health and safety of our employees and guests very seriously. We have spoken to the franchise operator and confirmed that the AC is fully functioning at location 4849 Madison Ave.”

A heat advisory is in effect for New York City. Cooling centers are open citywide for all New Yorkers.

Stevens, via a media representative, suggested operators deploy these strategies:

At the worker rally in Sacramento, organizers said they were also advocating for statewide legislation like the FAST Recovery Act, or Assembly Bill 257, which failed earlier this month in a California Assembly vote.

A representative for Lorena Gonzalez, the assemblywoman for California’s 80th District who sponsored AB 257, said the legislation may be reintroduced. The legislation called for establishing a council, composed of workers, state agencies and quick-service restaurant managers, that would have the power to issue standards around issues like excessive heat. Franchisors had opposed the bill.

In addition to the heat, the rallying workers said they are facing increased incidents of violence in the workplace from the communities they serve, such as crowds trying to break down the door to aggression in the parking lot.

“These types of incidents create an unsafe work environment, and management does not have a system in place or dedicated security at the store to prevent these recurring events,” the workers wrote in their public health complaint.

Update June 29, 2021: This story has been updated with a statement from Jack in the Box.