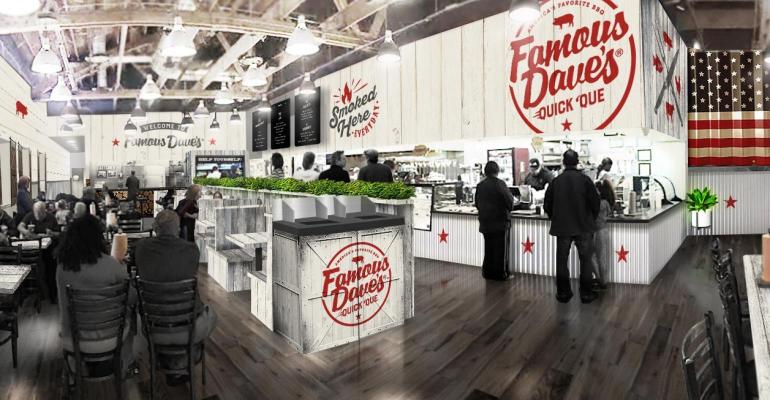 BBQ Holdings Inc.’s Famous Dave’s will be adding a drive-thru to its second Quick ‘Que line-service model, which is scheduled to open in Salt Lake City, Utah, in June, the company said Monday.

“A year after the arrival of COVID, we’re proud to continue finding new ways to evolve and better serve both our customers and our franchisees,” said Jeff Crivello, CEO of BBQ Holdings, in a statement. “The Quick ‘Que model is a prime example of that effort. Not only will this model provide a more convenient experience for customers without compromising the quality of the food, but its build-out should also prove to be more affordable and profitable for franchisees.”

For the fourth quarter ended Jan. 3, BBQ Holdings’ net loss widened to $2.8 million, or 31 cents a share, from $1.8 million, or 20 cents a share, in the same period last year. That was “driven partially by a decrease in same-store sales and franchise-related revenue caused by COVID-related restrictions,” the company said.

Revenues in the fourth quarter rose to $34.3 million from $23.6 million in the same period last year. During 2020, BBQ Holdings added 18 Granite City restaurants, a Clark Crew BBQ and a Real Urban Barbecue restaurant to its holdings.

Same-store net sales at company-owned Famous Dave’s units in the fourth quarter declined 5.5%. The company said 59% of restaurants were fully closed at one point during the quarter. Franchise-operated same-store net sales fell 13.6%.

As of Jan. 3, BBQ Holdings had four brands with 145 “brick and mortar” locations in 31 states and three countries, including 47 company-owned and 98 franchise-operated restaurants. In addition, the company has seven company-owned Famous Dave’s ghost kitchens operating within its Granite City Food and Brewery locations, and seven Famous Dave’s franchisee ghost kitchens operating out of the kitchen of another restaurant location or a shared kitchen space.