El Pollo Loco says Bernard Acoca has resigned as CEO and president and CFO Laurence Roberts will fill the post in the interim.
News>Quick Service

“Acoca will continue to provide consulting services to the company to further ensure a smooth transition,” the Costa Mesa, Calif.-based brand said in a statement. 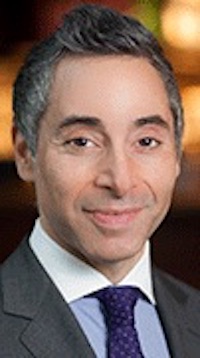 Acoca, left, had served as CEO, president and board member of the flame-grilled Mexican chicken brand since 2018.

Roberts will also continue as CFO while in the interim CEO role, the company said.

“On behalf of the board and everyone at El Pollo Loco, I want to thank Bernard for his valuable contributions, leadership and years of service to El Pollo Loco,” said Michael Maselli, El Pollo’s chairman said in a statement.

“Bernard and his team successfully navigated through the many challenges of the pandemic, and today the company is stronger than ever with increasing sales and a strong connection with our customers,” Maselli said. “Under Bernard’s leadership, we have accelerated our digital penetration and positioned the company for success over the coming years. Bernard will always be part of the extended El Pollo Loco family, and we wish him the best in his new endeavors.”

Roberts has served as El Pollo Loco CFO for the past eight years. Previously, he served as CFO and chief operating officer of Yum Brand Inc.’s KFC division.

“Larry has the highest level of respect for our customers, employees, and franchisees, and as a result, he is ideally suited to guide El Pollo Loco as we continue our journey,” Maselli said.

Acoca said in a statement that “the El Pollo Loco family, its customers, employees and franchisees are very special, and the company remains a truly differentiated brand. I am thankful for having had the opportunity to lead this tremendous company, and I know, under Larry’s leadership, El Pollo Loco will continue on its successful path.”