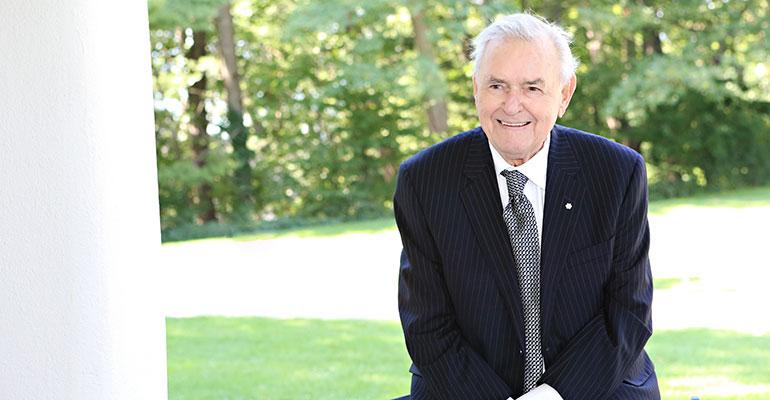 Ron Joyce, the Canadian businessman behind the early growth of the Tim Horton’s coffee and donut brand, has died. He was 88.

Joyce, who died Thursday at his home in Burlington, Ontario was an early investor in the brand created in Hamilton, Ontario, by professional hockey player Tim Horton in 1964.

Joyce, a former police officer, bought the company after Horton died in a traffic accident in 1974. He grew it through franchising and sold it to Wendy’s International Inc. in 1995. Tim Horton’s is now a division of Restaurant Brands International Inc. and has more than 4,600 locations worldwide.

Joyce was also an accomplished pilot. He flew his own company planes, “Donut 1” and “Donut 2,” and established Jetport Inc., a private jet charter company operating out of Hamilton, Ontario.

Born in the eastern Canadian village of Tatamagouche, Nova Scotia, Joyce went from humble beginnings to become one of that nation’s most widely known billionaires and philanthropists.

“It’s been a wonderful journey and I probably wouldn’t change a thing,” Joyce told The Globe and Mail last year.

Joyce, through the Joyce Family Foundation, devoted a substantial amount of his personal wealth to helping economically disadvantaged Canadian youth. For his efforts, he was awarded in 1992 the Order of Canada. The foundation has awarded more than $185 million to support children’s access education and other financial needs, the foundation noted.

Joyce also founded a camp for underprivileged children in the Horton’s memory, one of seven operated by the Tim Horton’s Children’s Foundation.

“Everybody should give back,” the Financial Post quoted Joyce as saying. “If you can afford it — giving is what it is all about. I think there’s an obligation to give back, especially if you’ve been successful financially.”

In the most recent Nation’s Restaurant News Top 100, Tim Horton’s ranked No. 70 in U.S. systemwide sales with $765.7 million in fiscal 2017 at more than 700 franchised locations in the United States.

“My father had a big vision and a big heart,” said Steven Joyce in a statement released through the family foundation. “Through hard work, determination and drive, he built one of the most successful restaurant chains in Canada. In his journey with Tim Hortons, he travelled all over the country and considered himself Canadian above all else. … He lived large and enjoyed the great journey of life.