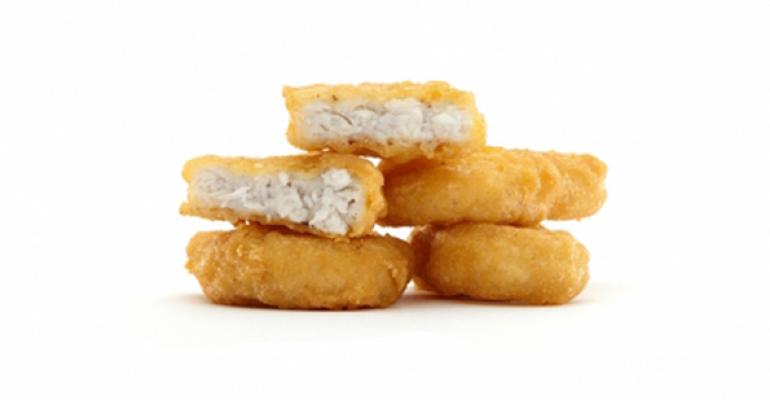 Chicken McNuggets give McDonald’s a boost

Sales of the McNuggets increased 10 percent after the chain announced in August that it removed artificial preservatives from the popular item, and removed antibiotics from its chicken, company executives said Friday.

The improvement was one of the reasons McDonald’s beat investor expectations when it recorded a 1.3-percent increase in same-store sales in the quarter ended Sept. 30. The company’s stock, down 16 percent since May, increased 3 percent Friday.

Yet while investors were pleased with the results, which assuaged some fears of a bigger slowdown, the results were still a modest slowdown from the previous quarter amid “near-term headwinds.”

While same-store sales rose, traffic at McDonald’s restaurants remains an issue. The company said that pricing in the quarter was 3.5 percent — suggesting a decrease in traffic of at least 2.2 percent.

“We’ve always said we expected 2016 to be uneven,” CEO Steve Easterbrook said on the company’s third quarter earnings call. He noted that markets like the U.S. and Germany “have had to overcome challenges of varying degrees. We’re mindful of near-term headwinds.”

McDonald’s v. quick-service segment
McDonald’s outperformed its competitors for the quarter. Quick-service same-store sales have been weakening all year. Yet the chain’s gap with competitors softened in the third quarter, Easterbrook said, to 0.6 percent.

“It’s a scramble,” he said. “All of us in the sector prefer some tailwinds. But there aren’t many tailwinds. There hasn’t been great economic growth. Consumer confidence is muted. We’re at a tough stage of the election cycle. None of that is a tailwind.”

“The softening of the gap is not a surprise,” he added. “It was at this time last year when we started to get some strong performance in the U.S. The reality is, the trend is no surprise.”

Still, Easterbrook said, “We’re not managing the business quarter by quarter.” The chain is performing strongly in most parts of the world, with global same-store sales up 3.5 percent in the period.

In it for the long term
McDonald’s is now shifting gears from a turnaround to long-term growth. In the U.S., that shift means a greater focus on operations, and a coming big move into what the company calls its “Experience of the Future.”

That “experience” is being tested at stores in various locations around the country. The stores include self-serve kiosks and table service in some cases and higher-end items with premium ingredients that could be customizable. That option could also be available for drive-thru customers.

Easterbrook said the company is finalizing plans for the design, with plans to roll it out “at a greater speed” starting as early as next year.

“We see something like a three-year program,” Easterbrook said. One big barrier before the chain can roll out such an initiative, which would require an investment from both the company and its operators, is “just a collective will to invest.”

Franchisees, however, are more profitable this year thanks to the aforementioned higher prices, along with lower commodity costs. Commodity costs in McDonald’s U.S. markets fell 6 percent in the quarter and are expected to be down 4.5 percent to 5 percent for the full year. While labor costs are increasing, improved profitability could spur more operators to invest.

McDonald’s focuses on performance
Another major element in McDonald’s strategy now is its focus on improving store operations.​

Easterbrook said the company has cut the gap in performance between its best restaurants and its worst performance in half — mostly through rapidly improved customer satisfaction among restaurants in the bottom fifth of performance.

“Our emphasis on underperforming restaurants is making a difference,” Easterbrook said. “We’re providing better, more consistent performance for every customer, every time they visit.”

McDonald’s earnings call Friday has come after major changes at the company, which more recently have included several executive changes — notably the retirement of McDonald’s USA President Mike Andres, effective at the end of the year.

Andres, who has spent most of his career at McDonald’s, is being replaced by a relative newcomer in Chris Kempczinski.

Easterbrook said that “management changes are an important part of the [turnaround] process.” He said the company is working to balance the need for experience in management with the need to bring in outsiders who “provide fresh energy and alternative thinking.”

“Let’s not forget, he’s taking five or six key, direct reports with combined more than 120 years of McDonald’s experience,” Easterbrook said. “His fresh thinking combined with that experience is a potent combination.”