The burger division of Toronto-based Restaurant Brands International Inc. has been working on its digital platforms since the COVID-19 pandemic began last March.

“It feels like we’ve just accepted what brands have told us is possible with loyalty programs over the years, so as we started working on Royal Perks, it was easy: Let’s do what the others don’t,” said Ellie Doty, chief marketing officer of Burger King North America, in a statement. “To make sure we get it right, we’re testing, learning and solving this year.” 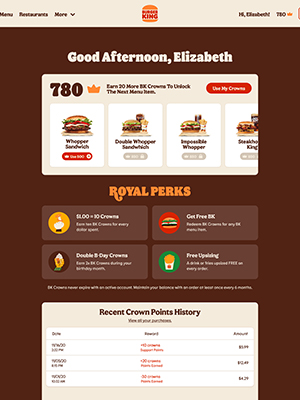 In the Royal Perks program, left, which becomes widely available in the test cities on Tuesday, customers will earn 10 “crowns” for each dollar spent, which can used to get free items across the menu. The platform also allows daily perks, the possibility of earning points for delivery through the website and smartphone app and double rewards in a user’s birthday month.

Competitor McDonald’s Corp. last week confirmed it was expanding its loyalty rewards program to New England after testing it in Arizona and Nevada.

Burger King, a division of Toronto-based Restaurant Brands International Inc., was founded in 1954 and has more than 18,800 locations in more than 100 countries and U.S. territories.