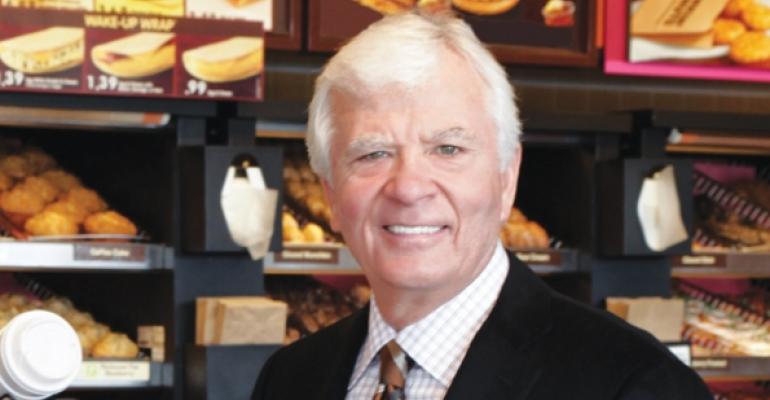 The 2013 Golden Chain award winners represent the best the restaurant industry has to offer. To celebrate the winners, NRN outlines each executive&rsquo;s road to the top and dives into the strategies they used to build brands and inspire people. The Norman Brinker Award honors Jon L. Luther as an inspired leader focused first and foremost on the development and success of people. Read about this year&#39;s Golden Chain award winners &gt;&gt;

Jon L. Luther never worked with Norman Brinker during his long foodservice career, but he credits the industry icon nevertheless for exerting a strong influence on his management style.

“Three things about Norman stuck out for me,” Luther said. “One, he was a powerful individual and very easy to like. Two, he was extraordinarily curious. Great leaders need to be curious and listen. Rather than tell people what to do, he would ask them how they felt about something and get input. And three, he was able to persevere — he just never gave up.”

Those who know Luther say the former chairman and chief executive of Dunkin’ Brands Inc. harbors many of the same qualities that helped Brinker establish himself as one of the most emulated leaders in the restaurant business — not the least of which is his ability to mentor and guide those who work for him.

Steve Caldeira, who served as executive vice president of Global Communications and chief public affairs officer at Dunkin’ Brands between 2007 and 2009, characterized his former boss as being “a great leader because he has a unique ability to take people with him.

“Jon’s vision, energy, marketing savvy, understanding of restaurant operations, commitment to menu innovation and franchisee inclusion, coupled with his ability to attract, develop and retain great talent, were the key ingredients in the remarkable transformation of Dunkin’ Brands,” said Caldeira, who currently is CEO of the International Franchise Association.

It is these abilities that make Luther a fitting recipient of this year’s Norman Award. The 4-year-old award was created to recognize restaurant executives for their extraordinary leadership skills and ability to inspire and mentor future industry leaders, as epitomized by Brinker, who died in 2009.

Philip J. Hickey Jr., a previous Norman Award winner and chairman of Miller’s Ale House, characterizes both Brinker and Luther as being highly competitive, “but in a very humanistic way. Both were driven but both employed a people-first approach — a quality you find among the most successful business leaders. Both were very creative and were able to inspire their people to be relentlessly creative, too. They established an environment [in which] people were always looking for a better way to do things.”

Alice Elliot, founder and CEO of The Elliot Group and Elliot Leadership Conference, which honored Luther with the 2008 Mentor of the Year Award, said the foodservice executive “has a very deep sense of humility; he never forgot where he came from. A lot of people get into corporate level positions and don’t keep their finger on the pulse of human capital. He is the antithesis of that. He always kept an eye out for where he could mentor people or help them excel.”

While Luther has left his imprint on some of the top companies and executives in the foodservice industry, he started off modestly enough. Before moving permanently into the commercial restaurant sector, he held a variety of positions at several contract feeders. Soon after graduating from Paul Smith’s College with a degree in hotel and restaurant management, Luther took a job with Service Systems in Buffalo, N.Y., working there between 1966 and 1968.

He then moved on to Aramark Corp., where he rose from vending sales director to become president of Davre’s, the Philadelphia-based firm’s luxury restaurant division.

“I credit Aramark for giving me a total foodservice education,” he said.

In 1982 Luther struck out on his own by entering the mergers and acquisitions side of the business, but was sidelined with back problems for more than a year. After he had recovered, he jumped back into contract foodservice, joining Marriott Corp. in 1985. In 1987 he and a group of investors formed Benchmark Services Inc., a corporate-dining group that collapsed during the 1991 recession when his partners bailed out.

Luther restarted his engines at Delaware North Cos. Inc. back in Buffalo, N.Y., where he served as president of its CA One Services airport subsidiary until 1997, when he accepted the post of president of the AFC Enterprises Inc. chain Popeyes Chicken & Biscuits. During his five years leading the Atlanta-based chicken chain, store counts rose by 67 percent to 1,672 outlets, while average unit volumes grew to more than $1 million. He also helped to differentiate the brand from the flock of QSR chicken chains by returning it to its Louisiana heritage.

In 2003 Luther was recruited by Allied Domecq PLC to serve as CEO of its restaurant division, Allied Domecq Quick Service Restaurants, where he was named chairman three years later. While there, Luther led a turnaround that would result in the formation of Dunkin’ Brands, a highly regarded, publicly traded firm that operates the Dunkin’ Donuts and Baskin-Robbins chains.

“Dunkin’ was a sleepy, regional brand; now it’s one of the most powerful brands in the world,” Luther said. At the same time, he helped grow Baskin-Robbins into what he called “one of the premier brands internationally.”

While at Dunkin’ Brands, Luther worked to establish values-based leadership, revitalize the company’s culture, reconnect with franchisees and develop a team of top chefs who broadened the concepts’ menus and fueled innovation. During his tenure, Dunkin’ Donuts also launched the highly successful marketing campaign, “America Runs on Dunkin’.” Between 2003 and 2009, systemwide sales rose more than 66 percent and the number of locations grew by 44 percent.

In 2009 Nigel Travis was tapped by Dunkin’ Brands to serve as CEO, while Luther remained executive chairman. In 2011 he was appointed nonexecutive chairman, finally stepping down in 2013. Travis, who today is chairman and CEO of Dunkin’ Brands, called Luther “a pioneer in the foodservice industry. … I am honored to have had the chance to work closely with him at Dunkin’ Brands. Thanks in large part to his efforts, Dunkin’ Donuts and Baskin-Robbins have become two of the world’s most recognized and beloved brands, and are well-positioned for growth and continued success.”

In 2011 Luther was elected chairman of the board of Arby’s Restaurant Group Inc., a position he holds today along with those of director of Six Flags Entertainment Corp. and director of Brinker International Inc. He also is on the board of the IFA, where he is once again working with Caldeira.

“Jon truly cares about people and the industry,” Caldeira said. “He remains an important mentor to me, and while he can be very direct at times, he was always fair, respectful and his comments constructive to my professional growth. With Jon, it’s all about character and values, and by changing the culture at Dunkin’ Brands, he paved the way to the success the brands are enjoying today. He’s the type of leader you’d walk through walls for.

“Without question, Jon epitomizes everything The Norman Award stands for, and I’m thrilled for him, as he clearly earned his way.”