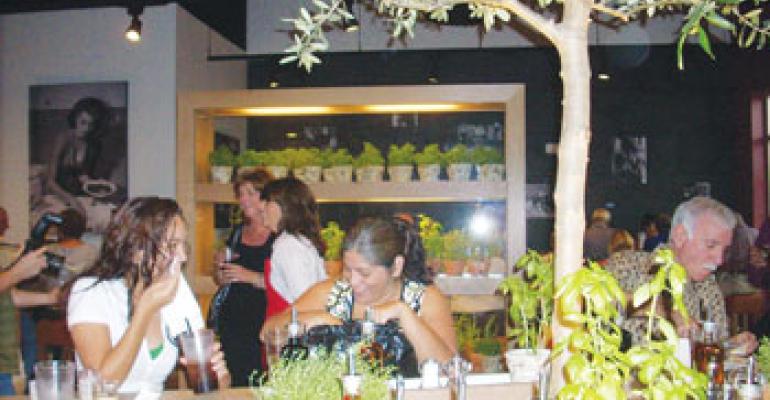 Vapiano puts freshness on the table

Restaurateurs use all kinds of cues to suggest freshness, from photographs of dew-beaded produce to menu descriptors like “just-picked” and “local.” But seldom is the tabletop their billboard of choice.

Meet Vapiano, the Italian concept imported from Germany with decidedly different ideas on the matter.

At each of the six units opened thus far in the United States, patrons sit at communal tables adorned with flowerpots sprouting rosemary, thyme or other live herbs.

At the 29 Vapiano locations in Europe, patrons are encouraged to pluck off a few sprigs of basil or parsley for their pasta or pizza. Because the sanitation rules of most states prohibit customers from picking and eating the leaves, U.S. stores provide the herbs merely as decoration. But customers often will break off a leaf out of curiosity or for its aroma, said Bill Bessette, chief executive of Vapiano’s American operation. With or without a pinch, he said, the diners get the flavor of the fast-casual concept.

“We’re going back to our European origins for the character of the concept, which is to solidify freshness,” Bessette said. “It creates the essence of what we are.”

The tabletop planters are twins of pots situated on wire racks near the concept’s open kitchen area, forming an herb garden for what Vapiano calls its “cook-tainers,” or showcased meal preparers. Bessette said the mini-gardens provide a dramatic visual element to the stores, which emphasize food cooked to order from fresh ingredients, including just-made pastas.

One of the concept’s signatures is the interaction between customers and the cook-tainers. Patrons walk up to one of several cooking stations, each manned by one of the cooks dressed in chef’s garb. Each scatter station provides a different item — pizza, perhaps, or pasta or a salad. The guests specify what they’d like and how they’d like it prepared — “heavy on the basil and garlic,” or “throw in a few chives,” for example. The cooks then can pluck the herbs fresh from the herb garden and make the dish to order as they chat with the customer.

The guests carry a smart card that records what they order at each station or from the bar, with the tab settled at the end of their stay.

Patrons carry their meal on a tray to one of the communal tables, which typically provide about 200 seats per store, Bessette said. There, guests can continue to assist in their meal’s preparation.

Joining the live herbs on the tabletop are cruets of olive oil and balsamic vinegar. Here in the United States, Bessette said, most patrons use the two items to dress their salads. Yet the oil is also provided for patrons to flavor their entrees.

“In Europe you see people pouring the olive oil over their pasta because that’s what they grew up doing. It’s the custom there,” he said. “Over here, people tend to dip their bread in it, instead of using butter.”

Vapiano also tries to provide a sense of the concept in its other tabletop elements, like flatware. It uses hotel-grade implements and big-brand pizza dishes, bowls and glassware. The bowls alone cost $20 each, Bessette said.

Patrons pick up the silverware and napkins when they get their meal. The tray is lined with a placemat, which usually focuses on one section of the menu.

Also on the tabletops are individual salt and pepper grinders, which are about to be changed out. “We need to upgrade them,” said Bessette, who came to the franchise chain from Legal Sea Foods.

“Design is of major importance to our concept,” he said. “It is essential. So we have elements like white oak woods, high-grade leathers, fireplaces in some restaurants and very upscale bathrooms. It’s a huge deal to us.”

Tabs at Vapiano usually fall between $18 and $20, which translates into average annual sales of $2.5 million per store, Bessette said. The typical unit encompasses about 5,500 square feet, though he said he’d welcome larger sites.

Bessette acknowledged that the tabletop elements may not tell a story to every patron. With the potted herbs for instance, “it’s a subliminal thing,” he explained. “If I was going to a unit for the first time, I might not notice it, but my wife would in about two seconds. She’d move the pot so it was positioned just right.

“The herb thing goes back to who’s attracted to our concept: Women,” Bessette continued. “It’s part of our culture.”

Each pot of herbs costs about $2, and is provided and maintained by an outside service. “We find local growers to produce them for us,” said Bessette “They pick whatever herb is in season or looks best that week, and we rotate them in every week.” Each table gets at least two pots, and the tally can run as high as eight for the larger communal settings.

“It says a lot about who we are,” said Bessette, adding that customers “love it.”