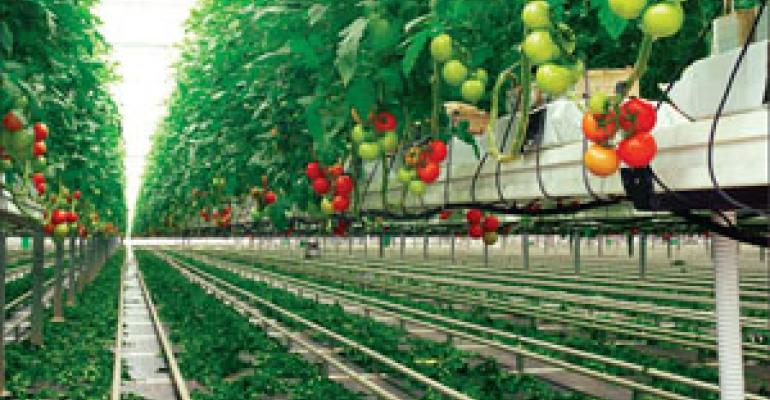 The politics of local purchasing

Inconvenient or not, the truth is that global warming has become a hot topic among consumers nationwide, and foodservice companies feel themselves coming under increasing heat to reduce their greenhouse gas emissions in order to please customers and protect the environment.

To accomplish those goals, more operators are embracing the notion of purchasing local foods—items grown or raised within 100 miles of their dining establishments—in order to cut down on the distance food travels and reduce carbon emissions.

Indeed, the buy-local trend among fussy chefs who are keen on peak-of-the-season produce and indigenous specialties is morphing into a broad-based “green” imperative aimed at cutting down transportation-related pollution.

For some foodservice operators, particularly those serving such clients as colleges and universities or national parks, the demand for such environmentally focused practices is growing at warp speed and companies, within the bounds of tolerable cost increases, feel they must participate to succeed in business.

Bon Appetit Management Co., the Palo Alto, Calif.-based contract foodservice company, has been a leader of ecological change by putting itself on a low-carbon diet.

Last spring the company embarked on a national campaign to reduce its greenhouse gas emissions by locally sourcing the majority of its foods, including meats, poultry and produce, for its 150 accounts nationwide.

“We like to refer to the low-carbon diet as the first national initiative that connects food to climate change,” says Helene York, director of the Bon Appetit Management Company Foundation. That relationship’s “significance is not well-understood by the foodservice sector, so we’re trying to lead and make some changes.”

The initiative, York says, cuts down dramatically on the transportation of the food Bon Appetit purchases.

“Of the six greenhouse gases emitted, the three biggest in terms of volume are carbon dioxide, methane gas and nitrous oxide, all of which are prevalent in the food system,” York says. “And CO2 comes from the burning of fossil fuels in the transportation of food.”

But the question of whether local sourcing really cuts down on carbon footprints is at the heart of a debate in the United States right now.

Rich Pirog, associate director of research at the Leopold Center for Sustainable Agriculture at Iowa State University, says that debate shows no signs of being settled anytime soon. He claims that not only do food miles need to be reduced to lessen greenhouse gas emissions, but the entire food system, including the way the items are grown, must be revamped.

“This has been the subject for a lot of debate in the U.K., and now we’re seeing more of it here in the United States,” Pirog says. “We did some research on U.S. food miles and came up with 1,500 miles for fresh produce, but that refers to produce traveling from national sources to the upper Midwest only. We’ve been misquoted at times because there isn’t a number arrived at by universities or the government that actually states the average distance food travels in the United States. We know that food miles are a good indicator of how local or global a food system is, but that’s not a good indicator of the carbon footprint.

“Really, when talking about greenhouse gas emissions, we should be looking at the carbon footprint of a whole food supply chain.”

In order to determine the environmental impact of food, one must follow it from seed to plate, he says.

“We need to look at production, processing, storage, distribution, and if talking about the restaurant industry, preparation, too,” he says. “So what impacts gas emissions greatly? Fuel usage in mode of transport. Whether it comes by plane, truck, rail or boat makes a big difference.”

In addition to the vagaries of the mileage-versus-emissions debate, more questions than answers seem to be raised by the greenhouse gas issue.

John Huey, director of steward-ship for Delaware North Cos., the contract foodservice firm based in Buffalo, N.Y., says he’s not sure what kind of impact using local foods is having on the environment, but he’s convinced it’s a step in the right direction. The company, a proponent of the local-foods movement, has actively been offering them on menus at its various accounts for the last five years.

“Does it reduce the carbon footprint? That’s a hard one, but it’s one of the interesting aspects of this whole issue,” he says. “Just about anything you come up with, someone will offer a counterproposal. Even if you send products by rail, they’re still going to have to be put on a truck and taken to our facilities. If it’s local, it’s not going anywhere; it’s just being put on the truck and we’ve eliminated the rail aspect, which seems like a good thing to me. The only negative I can see is you might not get everything you’re looking for when you want it. But that seems like a small negative to me. It’s better for the environment. We’re supporting the local economy and showcasing local agribusiness.”

For Eat’n Park Hospitality Group, the Pittsburgh-based parent of 71-unit Eat’n Park as well as six classic diners and a contract foodservice division, becoming more environmentally aware has become a part of the company’s mission for the future.

“We have to be thinking about a lot of things we could be doing locally but also about the things we are doing locally that we shouldn’t be doing, like emitting petroleum or fossil fuels in the growing and raising of food items,” says Jamie Moore, Eat’n Park’s director of sourcing and sustainability. “Figuring out ways to stay carbon-neutral is something we as a company are trying to get our arms around now. I do think one has to become a little more educated on it. I’m not 100-percent educated enough to know. There’s a ton of information and viewpoints, and to read and digest everything is a hellacious task.”

Says the Leopold Center’s Pirog: “What we’re seeing is a need for a more systems-based approach to [understanding] an environmentally based impact. When looking at local foods, it’s not clear-cut they will always have a lower carbon footprint.”

Pirog illustrates that notion by citing issues involved in the production of local foods: “I could grow something in a fossil-fuel-heated greenhouse, versus an open field further away that requires trucking the product in. The fossil fuels needed to produce the item in the greenhouse might outweigh the distance the product is traveling, so [in that case] there might be a greener footprint through distribution. ‘Local’ plays an important part if we look at the carbon footprint across the entire food chain, how it is being produced, stored and whether it is traveling great distances.”

He further states that just because local foods are available at farmers markets doesn’t mean they actually present a greener footprint.

“Say you have a farmers market and 150 people are driving there from 150 different locations,” Pirog says. “Is that a better way of getting local food than having the farmer distribute the food by himself?”

In addition to the distribution factors surrounding the purchase of locally produced foods, operators also are concerned it would ratchet up food costs, ultimately forcing them to raise menu prices. “Certainly an increase will come,” Eat’n Park’s Moore says. “How will the customer perceive price increases? Are they willing to pay it? We’re working on ways to combat this.” But a recent study conducted by Pennsylvania State University’s School of Hospitality could help dispel concerns associated with locally purchased food and increased costs. The study, released in January, found that the costs of purchasing local items were lower, at an average of approximately $3.80 per pound, compared with purchases from a national distributor, which averaged around $4.30 per pound. Researchers say that finding may be a result of local producers “aggressively trying to establish relationships with restaurants by providing competitive prices.”

However, the study, which was conducted with the help of restaurateurs and food producers over a two-year period, also determined that more time was spent on sourcing local products—about 128 hours compared with 92 hours for national products. The researchers indicate that the increased hours resulted from operators’ uncertainty over which producers had what products available.

In addition, delivery time for local products was longer, by approximately 1.4 days, as opposed to national suppliers, which averaged around 0.76 days for their deliveries.

Still, most operators say that while offering more local foods on their menus is a given, it is not realistic to think a national chain would be able to rely solely on area producers for their ingredients.

“For a conglomerate like Applebee’s,” Delaware North’s Huey says, “where the menu is pretty much the same all over the country, it may be difficult for them to use local markets. It’s easier for us since we have different types of facilities with a variety of menus. That affords us more of an opportunity to go with local markets.”

“We do have trucks coming across from California on a regular basis, and that’s not going to stop,” he says. “We could never eliminate [an ingredient like] lettuce from our menus. Now, could we eliminate grapes from Chile? Yeah, that’s something to think about. In the end, there probably wouldn’t be so much of a backlash if [customers] didn’t see grapes, like they would if they didn’t see lettuce or tomatoes on their burgers. I just don’t think the general public is ready for something that extreme.”