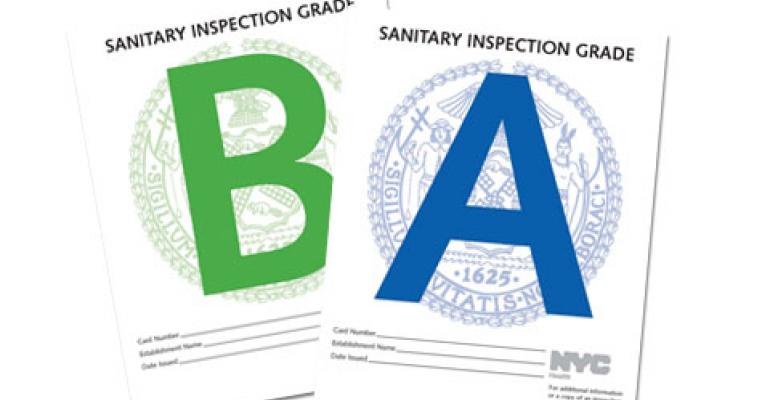 The New York City Health Department said Thursday that 80 percent of the 250 restaurants it has inspected under the city’s new letter-grade system have earned either A or B grades.

IN DEPTH: For operator reaction and commentary on these new regulations and what it means for business, check the Sept. 6 issue of Nation’s Restaurant News. Subscribe here.

The New York City Health Department is halfway through the new program’s fifth week of operation and has so far conducted letter-grade inspections at 1,825 establishments throughout New York’s five boroughs. Officials said it would take anywhere from one year to 14 months to complete inspections of the 24,000 restaurants located in the New York City area.

“These findings show that restaurants are taking their inspections seriously and that those who make a concerted effort can achieve our highest grade,” said Dr. Thomas Farley, New York City Health Commissioner. “Most restaurants maintain good sanitary conditions, and the City’s new letter-grading system is giving them tools and incentives to do better. As more and more restaurant operators improve their practices, we anticipate fewer cases of food-borne illness. Overall, we consider these initial numbers very encouraging.”

Under the new letter-grade inspection system, restaurants receiving up to 13 violation points on their initial inspections get an A grade, which must be posted in the storefront window immediately. Establishments receiving between 14 and 27 violation points get a B grade, and 28 or more points equals a C grade. Restaurants that score a C are re-inspected within seven days of the initial inspection. Restaurateurs also can choose to challenge the initial grade at a tribunal hearing and would then post a sign alerting customers that a grade is pending while they await the final ruling.

The department further stated that it would continue to close establishments that pose risk to the public health and will continue to inspect restaurants receiving B and C grades more often than those that receive A grades.