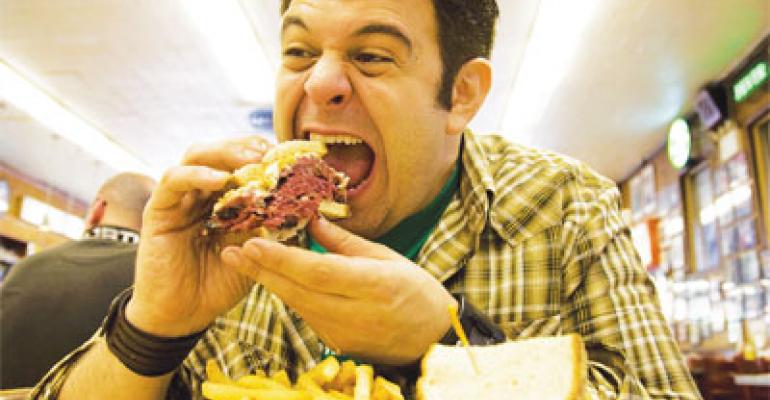 Challenging guests' gastric capacity can pay off in notoriety and profit

Everyone has seen those hardy speed-eaters cramming down dozens of wieners at Nathan’s Famous Hot Dog Eating Competition on Coney Island every Fourth of July, while millions have watched Adam Richman of the Travel Channel’s “Man vs. Food” scarf up anything that doesn’t have a pulse — and then some.

Harriett Seaver, owner and manager of Tio’s Mexican Cafe in Ann Arbor, Mich., insists the answer is “Yes,” and says that food challenges can provide lucrative national advertising for an operation.

“It does amazing things for your business, but you’d better be ready for it,” she said.
Tio’s is famous for its Mount Nacheesmo Challenge. A challenger has 45 minutes to finish five pounds of nachos loaded with beef, chicken, beans, cheddar, jack cheese, tomatoes, green peppers, black olives, lettuce, onions, sour cream and guacamole.
But publicity isn’t the only benefit for Tio’s.

“Actually, we really benefit from the people who come to share it,” Seaver said. “It’s not really our goal to challenge someone to eat a ton of food. We feel it’s a lot more fun to share it, and people have found that’s a great way to approach it. It’s a fun thing to look at, and everyone in the restaurant goes ‘Ooh’ and ‘Ahh.’”

The challenge helps Tio’s notch sales in excess of $1 million a year.

For the past two decades, Chip Bair’s Beau Jo’s Colorado Pizza in Boulder, Colo., has thrown down this challenge: Consume 14 pounds of pizza — the Mountain Pie — with a partner in one hour, and win $100 and a pair of T-shirts. To date, well over 400 diners have accepted the challenge and paid the $75 price tag, said assistant general manager Brian Grazer. However, only 18 have eaten their way to the top.

“It has been a staple of the restaurants for as many years as we’ve been open,” Grazer said. “It just brings in more crowds.”

The challenge is offered at all six Beau Jo’s locations in Colorado, as well as its outlet in Rapid City, S.D.

The 650-seat Big Texan Steak Ranch in Amarillo, Texas, is an historic restaurant, motel, horse hotel and tourist landmark. But it might be best known as “the home of the free 72-ounce steak.” Big Texan’s challenge: Finish the steak, a baked potato, shrimp cocktail, roll and pat of butter in an hour, and it’s free.

Since Big Texan’s founding in 1960, about 83,000 people have attempted the steak challenge, and only 5,800 have succeeded, according to owner Bobby Lee. The rest have had to foot the $72 tab.

Lee’s father, founder R.J. “Bob” Lee, was “kind of crazy enough to do something like that way back in 1960,” Lee explained.

“The idea came from something his dad had done when he was a restaurateur down in Kansas City when the war was over with, and all the GIs were heading back to the states.”

Half a century later, Lee added, the concept has been widely copied.

“It’s always been the mainstay and the reputation of the Big Texan as ‘the place with the big steak.’ It’s always been, ‘Everything is bigger in Texas,’ and here it’s identified the place as the place to go.”