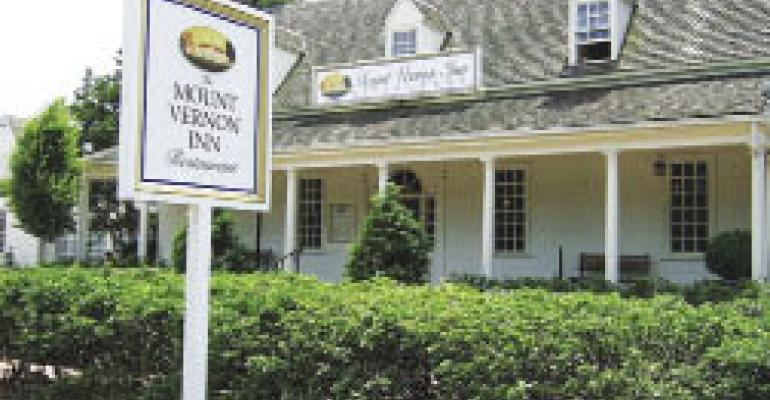 On the Menu: The Mount Vernon Inn

﻿The Mount Vernon Inn, adjacent to President George and Martha Washington’s Mount Vernon estate, doesn’t serve authentic colonial food, because if it did, “no one would eat it,” said William “Bud” Robertson, the property’s general manager for 28 years.

Still, the inn’s staff strives to recreate the feel of the estate where the first family lived. Lighted candles are on display in the evening, hand-painted 18th century style murals are painted on the walls, and servers dress in period costumes.

Using produce grown in the same soil the former president used has its challenges though. It costs more to clean than mass-distributed ingredients, Robertson said, and the Inn can swing from having a glut of items, such as cabbage, at harvest time, to having none in the off season. That kind of sporadic availability can pose challenges for the cooks and may require new menus throughout the year. Lastly, the farm just doesn’t grow enough of any one item to feed the 175,000 diners who visit the Inn each year. So the farm donates excess crop to a local food bank during harvest, and when available the restaurant uses select Mount Vernon grown items.

Cornmeal that’s ground in Washington’s actual gristmill coats the Inn’s fried green tomatoes in a popular appetizer that’s topped with tomato sauce and Parmesan cheese. The best-selling starter, Virginia peanut and chestnut soup, may sound colonial, but it includes nonlocal water chestnuts. Peanut butter thickens the base forming a thick mixture, which may have been used by slave cooks.

The Colonial Turkey “Pye” is one of the dishes designed to give guests “the feel of colonial food,” Robertson said, without the real long-cooked, free-range poultry or typically tough beef, which was eaten at the time. Similarly, the popular bread pudding, while not technically a historically accurate dish, actually comes from a frugal colonial sensibility of using up leftovers, Robertson said. The cooks prepare the dessert from old bread.

After years of losing money, The Mount Vernon Ladies’ Association, which operates the estate, has become profitable.

The Inn has gross sales of $3.2 million, which is augmented by $3.1 million from a 250-seat food court that Robertson oversees in a newly opened space next to the inn. Another $7.6 million in sales is generated from the attached gift store that visitors pass through when leaving tours of the mansion. These three retail outlets raise about one-third of the total funds needed to operate the whole Mount Vernon estate, Robertson said. Another third is generated from tickets sold for the mansion’s tours, and the same amount is raised by donations to the non-profit organization.

“Our No. 1 goal [at the inn] is to take care of the visitors to Mount Vernon,” Robertson said. “Our second goal is to generate money to go into the upkeep of Mount Vernon.”

“We were the cheapest game in town,” he said, “and I think we still are,” even after raising prices.

Robertson’s focus on hospitality is in keeping with the habits of the country’s first president, who had a reputation for taking in individuals who visited his property, according to Mount Vernon tour guides. And after stepping down as president, Washington would feed and shelter people who visited, invited or not, overnight for free. In 1785 alone George and Martha reportedly hosted 423 houseguests at their estate.