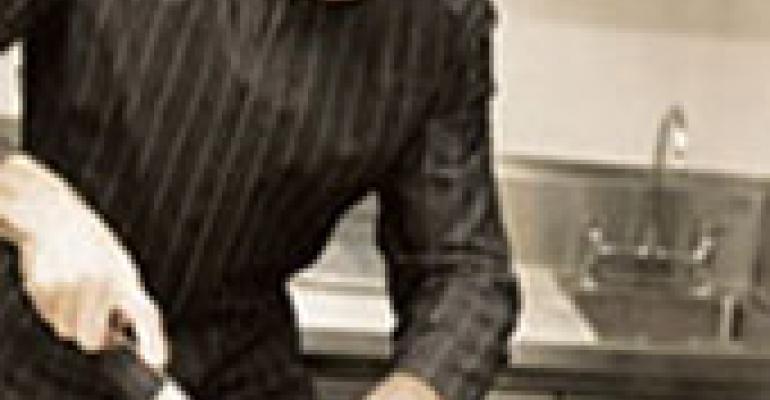 Laurent Gras’ elaborate kitchen at L20 puts the emphasis on production, on the line and online

In addition to exciting the envy of other chefs, the lavishly equipped kitchen of L2O, the upscale seafood restaurant in Chicago developed by Laurent Gras and Richard Melman, promises to prompt new ideas about equipment usage and layout.

That’s because L2O is a relatively open book. Executive chef and co-owner Gras, his staff, and some of his purveyors have told the restaurant’s tale on the L2O Blog since it was a gutted shell—the remains of Ambria, Lettuce Entertain You Enterprises’ fine-dining flagship for 25 years. They recount many of the steps in the redesign and outfitting, posting everything from a YouTube tour of the partially constructed kitchen to details of the minimalist decor and tidbits about menu ingredients and wine. Gras discusses his culinary approach, explains his gadgets, answers readers’ questions and shares recipes from his four-course and 12-course tasting menus.

Anyone can pull up photos of Gras’ eclectic kitchen battery, which has a custom-made machine for freeze-drying foods, a triple-deck, steam-injected bread oven, a Belgian butter-churning machine, a Heidolph rotary evaporator—a device he uses to distill fragrances from oranges or pine needles to add scents to food—and several Gastrovacs, which cook and infuse food in a vacuum to create special flavoring effects.

“Communication is very important,” Gras wrote in a blog post. “It’s important to know how to give to the general public and the industry, just to be part of the growing mechanism of changing things and doing things better.”

A Frenchman whose résumé runs like a Michelin map through the kitchens of Alain Senderens, Jacques Maximin, Guy Savoy and Alain Ducasse, Gras came to prominence in the United States at Peacock Alley in the Waldorf-Astoria New York and San Francisco’s Fifth Floor.

At L2O, he has blazed his own trail in kitchen design. For starters, he chose to forego standard elements such as a chef’s office, walk-in coolers and extensive dry storage.

“We decided to dedicate the most space to production,” Gras said. “The whole idea was to bring comfort to the people working inside the restaurant. Everything should be practical.”

In lieu of an office, Gras keeps a notebook computer in a kitchen closet. Why devote valuable space to an office that would be used only 30 minutes a day to check e-mail and prepare orders, he reasoned. Also, little storage is needed because the kitchen works with fresh products every day. In another space-saving move, the kitchen’s four combi-oven steamers are installed under counters at various stations, rather than taking up floor space.

L2O’s kitchen is divided into eight stations: sashimi, steam, grill, sauté, private parties and amuse, dessert, fish break-down, and bread baking. Each one is staffed by three cooks and is overseen by a chef or sous-chef. Gras, very much a hands-on chef, parcels out his time on all the stations.

The layout is different because there is no dominant central stove, nor does it have a “pass,” or a single station where cooks place finished plates for servers.

“The pass runs through the center of the kitchen,” Gras said. “Waitstaff move down the pass to pick up plates, instead of cooks running up to a central pass.”

This “gives more air to the space,” as he put it, and creates a better workflow.

About the only thing Gras is not forthcoming about is the cost of the L2O kitchen, but he said it was “very much higher” than the tab for a typical fine-dining restaurant.

“I don’t think money reflects the general idea or the spirit of what you want to accomplish,” he said. “But a great kitchen is pretty expensive. You don’t have this kind of kitchen if you don’t spend this kind of money.”