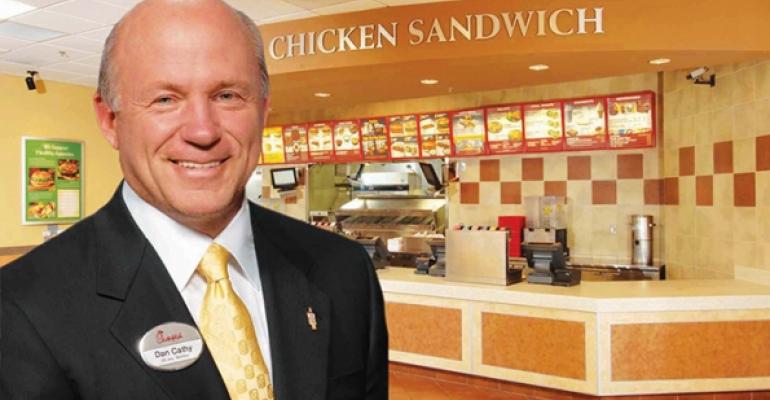 NRN presents The Power List 2016, our third annual list of the most powerful people in foodservice. The Heavy Hitters on the list manage the footprints of large restaurant chains and are driving inventive practices.

Dan Cathy, chairman, president and CEO of Chick-fil-A Inc., keeps a runner’s baton in his leadership toolbox to remind him “that success is really all about succession, and one day, all leaders have to hand off the baton.”

The toolbox and its various possessions are props in a series of leadership videos by Cathy posted on the Cathy family website that is separate from the company website. Among Cathy’s tools is a railroad spike — “stay on track and on task,” and a waiter’s side towel — “have a heart for service.” These tools have helped him lead the company his father, the late S. Truett Cathy, founded in the early 1960s.

Since taking the baton from his father in 2013, Dan Cathy has been running strong. The privately held, Atlanta-based company has surpassed other quick-service chicken restaurants in sales and continues to set its own records for sales growth and customer satisfaction.

Chick-fil-A has consistently recorded strong sales figures, largely on the strength of its streamlined menu centered around its signature boneless chicken breast. The 1,900-unit chain records nearly $6 billion in annual sales and has average-unit volumes of $3 million. In addition, the company said it expects to post double-digit same-store growth for 2015.

All of this is accomplished in only six days a week. Following the tenets of the Cathy family’s Christian faith, the restaurants are always closed on Sundays.

Chick-fil-A also ranks highly in customer service. The chain outpaced all other limited-service chains in the 2015 American Customer Satisfaction Index.