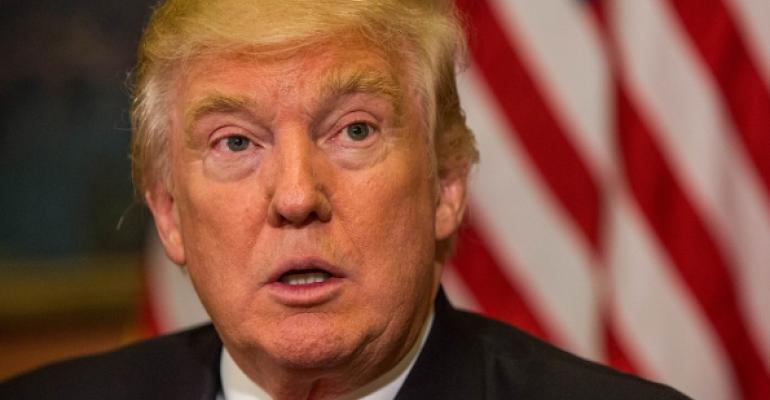 How Trump’s win will impact restaurants

Analysts say President-elect’s policies might boost the economy, but some proposals could cause problems

Donald Trump’s surprise election on Tuesday should be good for the economy and for restaurants, according to analysts and investors.

But some of the President-elect’s promises could cause problems down the line, especially for brands with global ambitions.

Restaurant stocks have risen each day since the election, according to the NRN Restaurant Index, and so have broader stock market indexes. The S&P 500 is up 1.3 percent over the past two days, for instance.

Investors and analysts say Republicans’ desire for tax cuts and increased spending could ultimately help the economy, which should prompt spending at restaurants.

Tax reform is the most likely result of Tuesday’s election. Both Trump and Congressional Republicans favor tax cuts. Lower taxes that put more money into Americans’ wallets are generally good for a restaurant industry dependent upon discretionary income for sales.

“History tells us that lower income taxes could provide a nice tailwind for restaurant spending,” Baird analyst David Tarantino wrote in a note on Friday. If Congress enacts 2017 cuts retroactively, he said, the impact could be felt next year as the industry compares itself to weak 2016 sales, “potentially leading to a healthy, broad-based” same-store sales acceleration.

But what those tax cuts look like remains to be seen. The cuts could be concentrated on higher earners who are spending plenty at restaurants already, and are unlikely to spend more if they get a few extra bucks.

The real problem for the nation’s restaurants, especially the casual-dining segment, is that income among middle-class Americans has been squeezed by a lack of income growth and increases in costs such as health insurance.

“It’s less clear to us that the nature of the proposed tax cuts will be all that helpful,” Bernstein Research analyst Sara Senatore wrote in a note Friday. “The bulk of the benefits appear targeted at the most affluent consumers, whose marginal propensity to spend (especially on things like fast food) is generally low.”

Trump has proposed investments to rebuild the nation’s infrastructure. That plan has had a chilly reception among his fellow Republicans in Congress, but Democrats have already warmed up to the idea.

Should that plan see the light of day, the focus on infrastructure could fuel the creation of thousands of construction jobs, providing a long-term lift to the economy. Infrastructure spending should help the economy, Senatore wrote.

Other areas are viewed as potential benefits to restaurants, too. Trump has vowed to dismantle the Affordable Care Act, which would end a potentially major cost for many restaurant operators should it be achieved. Republicans have also pledged to reduce regulation.

“While difficult to assume material changes to current laws, we certainly believe the threat of additional, onerous regulation has been diminished,” Tarantino said.

All that said, there are areas where the new administration could cause problems for restaurants.

One issue could be the global view of the West, given Trump’s nationalist rhetoric during the campaign. At a point when numerous chains are working to expand into new markets, this could be a problem.

“Anti-U.S. sentiment is a rising risk, particularly in countries that have come under scrutiny, like China and Mexico,” Senatore wrote. “If campaign rhetoric is an indication, surges of anti-American sentiment are likely to increase, a risk for global restaurants and their local licensees.”

Trump has also been particularly aggressive when it comes to trade, a view that helped him win over many middle-class voters in manufacturing-heavy Midwestern states. He has vowed to renegotiate trade deals and get tough on countries that violate trade agreements — especially China.

“We are not economists,” Senatore wrote, “but it’s hard to envision a scenario where reducing trade will grow jobs or the economy.”