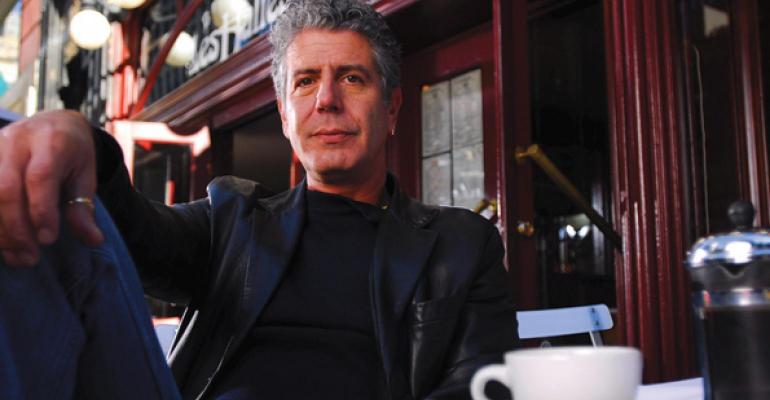 Fans of Anthony Bourdain around the globe took to social media in an embrace of the chef, author and television host, who over the years had had an impact on so many.

Bourdain died on Friday, age 61, due to an apparent suicide.

Bourdain was described as fearless, infinitely curious and authentic — a truth teller who cut through what he identified as “bullshit.”

He was praised as an advocate for the #metoo movement and a champion for the rights of immigrants. But, mostly, he inspired a generation with his truly genuine interest in food and other cultures, and the way gathering around a table to eat brought people together.

Bourdain’s girlfriend Asia Argento, who posted a statement on Twitter, said, “Anthony gave all of himself in everything that he did. His brilliant, fearless spirit touched and inspired so many, and his generosity knew no bounds. He was my love, my rock, my protector. I am beyond devastated. My thoughts are with his family. I would ask that you respect their privacy and mine.”

Prominent people across all walks of life offered their condolences and memories of Bourdain. He was called the “The Lou Reed of Food,” a “Culinary Hemingway,” and a great storyteller who could see magic in the mundane.

“Low plastic stool, cheap but delicious noodles, cold Hanoi beer.” This is how I’ll remember Tony. He taught us about food — but more importantly, about its ability to bring us together. To make us a little less afraid of the unknown. We’ll miss him. pic.twitter.com/orEXIaEMZM

Just saw the sad news that Anthony Bourdain has died. I watched his show when I was in space. It made me feel more connected to the planet, its people and cultures and made my time there more palatable. He inspired me to see the world up close. #RIPAnthonyBourdain pic.twitter.com/Cb6IfmzylN

Bourdain in recent years reportedly had been working to open a food hall in New York’s Pier 57, but the highly anticipated venue never came to fruition.

Though it had been years since the former Brasserie Les Halles chef worked on a regular basis in a restaurant kitchen, he was considered by chefs around the world as one of their own.

Here’s a look at how chefs and restaurateurs around the country — from the well-known to the lesser known — reacted, including the chef Eric Ripert, a close friend who found Bourdain dead in his hotel room in France:

Anthony was my best friend. An exceptional human being, so inspiring & generous. One of the great storytellers who connected w so many. I pray he is at peace from the bottom of my heart. My love & prayers are also w his family, friends and loved ones. pic.twitter.com/LbIeZK14ia

My friend..I know you are on a Ferry going to somewhere amazing.....you still had so many places to show us, whispering to our souls the great possibilities beyond what we could see with our own eyes...you only saw beauty in all https://t.co/Ltw9HrCBb2 will always travel with me https://t.co/Yv4Ntud6X0

Heartbreaking news. He taught many what real food is or can be, and that people around the world aren't so different. Every nation has its own type of burrito! "Anthony Bourdain, Revered Traveler, Cook & Writer, Has Died" on @Food52

RIP doubtful. Tony’s restless spirit will roam the earth in search of justice, truth and a great bowl of noodles. @Bourdain

His swagger, his prose, his grit. Tony didn’t give a fuck the way most of us wish we could. That’s what made him special. Right now He, Bukowski, Hemingway and Wilde are splitting a bottle of scotch, swapping war stories, prepared to drink each other under the table, with verve. pic.twitter.com/8aLrv2MjSf

Im so angry this morning. Life is fucking hard and crazy and Tony I love you. Im wearing your boots that I never wore because they were yours, and going to work. Everyone should hug some extra people today. My heart is heavy. https://t.co/2lFmz1UvWK pic.twitter.com/62Qcjwo33f

His book Kitchen Confidential ushered in a new era of young chefs into the restaurant world. I know. I was one of them. His work since then inspired millions to love the wonder and delight of real food. I am so saddened by our loss of Anthony Bourdain. He will be missed. pic.twitter.com/Sc8JAaXjd2

Others pointed to the fact that Bourdain’s interests went well beyond food.

Ben Rhodes, for example, author of a memoir about the Obama White House, credited Bourdain with helping to secure funding to remove unexploded bombs in Laos.

Among the many ways that Anthony Bourdain made a difference: the spotlight he put on unexploded ordnance in Laos got the Obama Administration's attention and helped secure $90 million in funding to help clean up those bombs.

Andrew Rigie, executive director of the New York City Hospitality Alliance, said in a statement that the city’s hospitality community was shaken by the news of Bourdain’s passing.

“He put deserving restaurants all over the world on the map through ‘Parts Unknown.’ His loss is one that will be felt for many years to come. Our thoughts are with his family and loved ones. This is a very sad day for our industry and reminds us that suicide affects people in all industries and ours is no exception.”

Alan Liddle, senior data and events editor at Nation’s Restaurant News, remembered interviewing Bourdain for a podcast about a decade ago, saying the seemingly tough and brusque New Yorker was surprisingly low key in person, and spoke intelligently and thoughtfully on a wide-range of topics, from the farm-to-fork movement to food safety and immigration.

Bret Thorn, senior food-and-beverage editor for Nation’s Restaurant News, also recalled an interview with Bourdain, saying he was surprised by the industry’s reaction to his piece in the New Yorker that got him the book deal for “Kitchen Confidential.”

“I interviewed him between when the article and the book came out, mostly because, as a writer who had once thought of becoming a chef, I wanted to meet a chef who was also a writer. The industry took it as an exposé, but to him it was a fond remembrance.

“I asked him about cooking and writing, because to me they were opposites: Eating uses all five senses, whereas writing isn’t dependent on any single sense (you can use your eyes or ears or fingers, if it’s in Braille, but it’s not the sense you use that matters). But to Bourdain they were similar: They were both about showing up and working really hard.”

If you or anyone you know is considering suicide, call the National Suicide Prevention Lifeline at 1-800-273-8255.