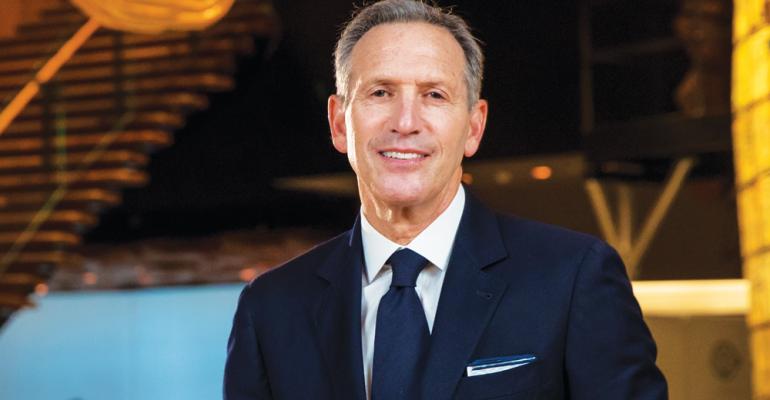 Former Starbucks CEO Howard Schultz, who stepped down as executive chairman of the coffee chain last June 20, teased a potential run for U.S. president as an independent in an interview Sunday on CBS’ “60 Minutes.”

Schultz said he was “seriously thinking” about a run for president as a centrist independent, outside of the two-party system.

The question I think we all should be asking ourselves is: at this time in America when there's so much evidence that our political system is broken - that both parties at the extreme are not representing the silent majority of the American people - isn't there a better way? pic.twitter.com/Gy1wf1cf8F

“We're living at a most fragile time,” Schultz said in the interview, “not only the fact that this president is not qualified to be the president, but the fact that both parties are consistently not doing what's necessary on behalf of the American people and are engaged, every single day, in revenge politics."

Howard Schultz doesn’t have the “guts” to run for President! Watched him on @60Minutes last night and I agree with him that he is not the “smartest person.” Besides, America already has that! I only hope that Starbucks is still paying me their rent in Trump Tower!

Schultz’s potential run as an independent drew criticisms from some Democrats, who said Schultz is joining the already-crowded race could throw off the Democratic Party’s chances for election in 2020.

"I have a concern that if he did run, that essentially, it would provide Donald Trump with his best hope of getting re-elected," Julian Castro, former secretary of Housing and Urban Development, said on CNN Sunday. Castro, the former mayor of San Antonio, Texas, announced his presidential run earlier in January.

Schultz’s announcement on “60 Minutes” fueled outrage on social media both from liberals and conservatives. As of Monday morning, #BoycottStarbucks was trending on Twitter, largely in response to Schultz’s more conservative policies. Criticism included his opposition to universal healthcare, which he called something “the country cannot afford” in his interview on Sunday.

I pledge to #BoycottStarbucks if you run for President as an Independent.

Please join one of the two major parties, or go buy a yacht instead.

Equity research platform Senieo noted that Starbucks boycott threats on Twitter have had more impact in the past and those did not appear to affect the company’s stock price.

However, the current spike in boycott+starbucks mentions is small compared to prior ones, and the prior ones do not seem to affect stocks price and global comparable store sales $SBUX @starbucks #twitterdata pic.twitter.com/OsuqFPcgAt

If Schultz’s run is more solidified and his campaign begins to pick up steam, analysts believe that his presidential run could affect Starbucks stock, even though the only title Schultz holds with the company is chairman emeritus, which is an honorary title.

“If Mr. Schultz is widely seen as doing something meaningful that could help tip the U.S. presidential election toward the current Republican incumbent, the relevant question for Starbucks shareholders might not be if Starbucks’ business would be harmed by Mr. Schultz’s actions — only by how much,” said analyst Mark Kalinowski of Kalinowski Equity Research in a note.

Other restaurant executives have thrown their hats into the political ring. The former CEO of Godfather’s Pizza chain, Herman Cain, ran unsuccessfully to be the Republican presidential nominee in 2012.