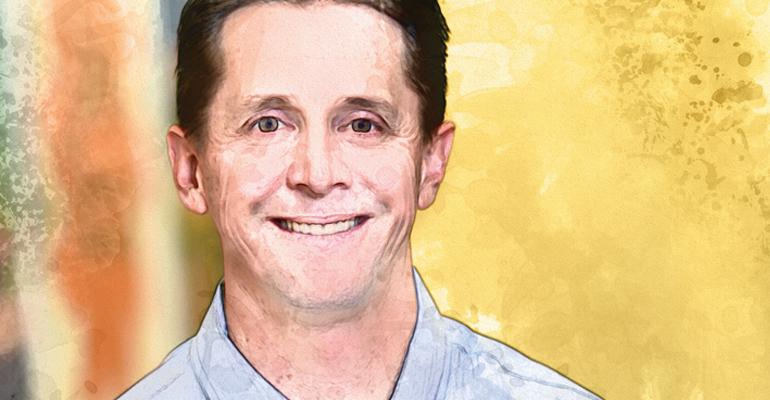 The day before John D. Cappasola Jr. interviewed for a marketing vice president job at Del Taco, he asked his would-be bosses for permission to hang out at a Del Taco.

The Southern California native, then a Blockbuster executive, had grown up eating at Del Taco. But the self-described “operations guy” wanted to see firsthand what it was like to work at the fast-food restaurant.

He got more than what he bargained for. “I was running drive-thru by the end of the day,” said Cappasola, the chain’s CEO and winner of NRN’s 2018 Golden Chain award.

In fall 2008, Cappasola became vice president of marketing development at the Mexican fast-food chain. But, before he could weigh-in on brand decisions, he once again made an unorthodox request. He asked to work six weeks at a restaurant.

On his first day, he was tossed on the grill after a cook called in sick. It was Taco Tuesday, and the restaurant was slammed. He ended up working a 12-hour shift and burned his arm on a quesadilla press.

It was a rough day, but one he’ll never regret. Embedding himself in the restaurant gave him the ultimate insider’s peek at the brand.

“That gave me credibility and context beyond belief,” he said.

A decade later Cappasola is credited for changing the way consumers view Del Taco. In 2013, the then chief brand officer repositioned Del Taco into the QSR-plus category. He exposed Del Taco’s fresh prep kitchens while pushing for elevated or differentiated menu platforms such as Platos, Epic burritos and turkey tacos. Casting a wide net with a mix of dollar items and Chipotle-style burritos has proved to be lightning in a bottle for Del Taco.

Systemwide same-store sales have been positive for 19 consecutive quarters and 24 for company-owned operations. While restaurant visits have stalled for most companies, Del Taco has seen five consecutive years of positive traffic.

Cappasola credits the boost to the 2013 brand pivot. “That’s the evolution. That’s where it all started.”

During a recent interview at Del Taco’s headquarters in Lake Forest, Calif., he talked about Del Taco’s enviable success, the lessons he learned at Blockbuster and the chain’s next moves to maintain its positive sales streak.

How has Del Taco changed since you started 10 years ago?

It was a value-oriented Mexican fast-food brand. That’s what this brand was for a lot of years. It had good core operations, good value proposition but it was mainly on the pricing side of value. Fast casual was just starting to gain momentum. Fast food hadn’t made a major shift at that point.

What trends were you seeing?

Fast casual was exploding because people were willing to pay a little more for better quality food. They were sacrificing some form of convenience to do that. They’re getting out of the car and paying $2 and $3 more. That tells you there’s something powerful happening from a consumer demand standpoint.

You took a big risk by shifting to an unknown category between fast food and fast casual. What was your marketing strategy?

When we launched our first campaign [in April 2013], it was called “UnFreshing Believable.” The reason why we did that is we were bridging the gap between what people knew about us today, and what we hope people would discover about the brand — the fact that we go above and beyond. That became our road map for everything.

Good question. It was really born as a lot of the companies were starting to go public four to five years ago. It became a way to understand the idea of bringing great quality food under the same roof as great value. For us, as a brand, when we heard that term, it codified what we were trying to accomplish.

Your background is in retail, working at Blockbuster. How did that experience translate to fast food?

I worked my way up to be a general manager. I got enamored with people and service and how it all came together. It really influenced the first 10 years of my career as an operator. Then, I got into strategy and brand. And, the last 17 years that what I’ve been doing.

What was your first restaurant job?

I’m serious. That was when I left Blockbuster to come to Del Taco. 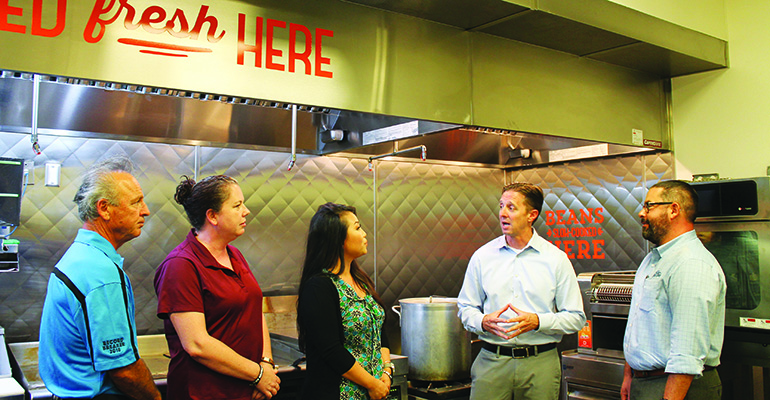 How did you convince Del Taco to hire a guy with no food experience?

When I first got the interview, they asked me, ‘What’s the difference between selling videos and selling tacos?’ From a fundamental standpoint, there’s really no difference. It’s branding, marketing and understanding your guest, and understanding where you fit competitively. The difference is, we weren’t actually producing the movies within the four walls. Now we produce it and execute it.

What is the brand promise you always talk about?

So ultimately, you won’t do anything that would derail speed?

There’s constant tension down in the test kitchen. Culinary might go, “This is the greatest thing in the world. Look how great this is. Look at this new ingredient. It’s going to change our lives.” And, the operations guy is saying, “Hey wait a second. That’s a new protein. How does it get on my line? How much time can I hold it for?” We developed an operations innovations team to make sure the things we were delivering through the menu could be executed at a high level [and] that weren’t going to bog down our operators and put them in an unfair position.

What kind menu innovations did you turn down because they were too hard to execute?

We were looking at fried burritos. They were awesome, but it was very cumbersome for operations. It was degrading speed and degrading quality. We decided to place our bets in other places and we decided to walk away from that program even though it was a high consumer demand program for us. It was a tough decision.

What lengths do you go to perfect a new product?

Platos. It was a big opportunity to elevate ourselves at dinner. That took us two years to get to market. It was hard to figure that out at the drive-thru. We wound up actually following guests home with that program. We got to their house, and we saw that the packaging wasn’t quite where it needed to be. It wasn’t holding the heat. We changed the packaging based on those guest experiences.

What’s next area of focus for Del Taco?

We’re moving to hospitality. Delighting our guests. We want more genuine and authentic experiences with people.