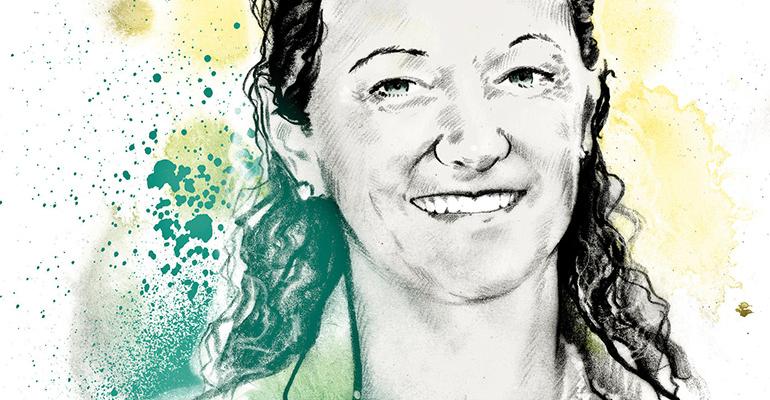 Lisa Ingram, White Castle’s CEO and president, is as close as one can get to quick-service royalty. Case in point: She lists “Slider Queen” on her LinkedIn profile along with her more formal titles.

As a fourth-generation leader of a nearly century-old chain, Ingram has had the tough job of holding on to what’s iconic about White Castle while positioning the brand for the future.

“We get to steward what our previous generations have built and take it to a different level that resonates with today’s consumers and where the food industry and restaurant industry is going,” Ingram said.

Under Ingram’s leadership, White Castle has continued its steady growth. The Columbus, Ohio-based chain had $564.2 million in domestic system sales in 2016, an increase of 3 percent over the preceding year.

Within NRN’s Top 100 restaurant-chain database, the brand has increased its market share within the limited-service burger-chain space.

Ingram joined White Castle in 1997 as a marketing manager after building her career outside the family business. (Ingram family members must be qualified for White Castle roles, and the family encourages outside experience.) The great-granddaughter of founder Edgar Waldo “Billy” Ingram, she worked her way up to president in 2013 and took the helm as CEO of the 400-unit chain in 2016.

Her priorities are expanding the brand, menu development and maintaining a positive company culture.

“We’ve done more product development in the last eight years than we’ve probably done in the last 80,” she said.

That is no exaggeration. When White Castle opened in 1921 with its famous beef slider, it didn’t change the menu for 40 years — when the chain boldly added a slice of cheese, Ingram said.

“Most of those things are not products that we would have had 20 years ago but they are very, very relevant and desired by consumers today,” Ingram said.

The last decade has been all about product development, and Ingram still has her foot on the gas. The menu now boasts fruit smoothies, onion chips, Belgian waffle breakfast sandwiches, grilled chicken sliders, veggie sliders and black bean sliders, as well as a rotating cast of limited-time offers that includes the likes of crab cake sliders, shrimp nibblers and hot chicken sliders.

And guests are responding well to the different options. The introduction of new menu items allows the burger chain to expand its customer base.

“When we introduced our veggie slider and our black bean slider, we had customers coming in that don’t normally eat White Castle at all and were really excited to have vegetarian options at a QSR,” said Ingram.

That doesn’t mean Ingram is turning her back on White Castle’s roots.

“We’re excited to expand the brand but we’re still going to honor those customers that just want to have their original 2x2 slider, and we will be happy to make that for them however they wish.”

Of the 450 restaurant leadership positions at White Castle, a staggering 442 are filled by employees who started at counter positions.

Ingram said that many team members join White Castle as teenagers as a temporary job, but some wind up staying for 30 or 40 years.

“I think that’s a great testament to the industry … but we’re really proud of the fact that somebody can come to us 16, 17 years old, and be able to work their whole career at the same company and provide for their families, send their kids to college and have a really nice lifestyle.”

White Castle may have been slow to add cheese to the menu in 1961, but now the brand is leading the pack on change with its new transparency initiative.

“We’ve always been very proud of our health inspection scores … quality is a really big focus for us,” Ingram said.

One of the ways White Castle controls quality is through its vertical integration, owning the processing facilities that make the sliders for its restaurants and its retail products. All restaurants are company-owned. White Castle’s retail division, started almost 30 years ago, is responsible for 20 percent of sales. Customers can buy sliders in the frozen-food aisle to make at home, whether or not there is a restaurant locally. With the retail product already distributed to 50 states, Ingram wants to further build that program.

“We continue to see a lot of opportunities in that division to grow and expand our product offering and expand our distribution throughout the United States.”

At the restaurant she refers to as “home,” it’s not surprising Ingram has her eye on the long-term health of the White Castle brand.

Ingram said she looks forward to continuing to grow the White Castle brand and “helping it be a wonderful place to work for the next 96 years.”