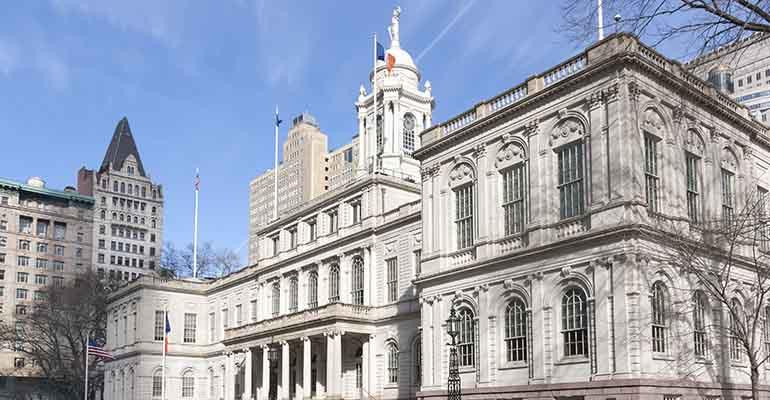 Whether it’s called a ghost kitchen, virtual kitchen or cloud kitchen, these spaces are difficult to define and perhaps even harder to regulate. But the New York City Council’s Small Business Committee gave it a try on Thursday.

A ghost kitchen by any other name is a kitchen housed outside of the walls of a brick-and-mortar storefront, and often it’s a shared commissary kitchen. These facilities are used by new and established restaurant brands to serve off-premise customers. New York City has its fair share of these businesses, and traditional restaurant owners are beginning to worry that they’re eating into their business, among other concerns.

The NYC Council’s Small Business Committee, headed by councilmember Mark Gjonaj, has investigated various factors impacting restaurants in the past. Previously, Gjonaj led a hearing on the impact of food delivery apps on the restaurant industry. This hearing was set to address the impact of ghost kitchens.

CEOs of two ghost kitchen operators, Zuul Kitchens and Kitchen United, spoke on a panel before the committee, as well as a representative from the Department of Health, a member of the Small Business Council and several independent restaurant operators.

New York-based Zuul Kitchens counts the famous midtown deli Sarge’s as a customer. Corey Manicone, a co-founder of Zuul, argued that his company helps restaurants expand their reach. By operating out of Zuul Kitchens, which is located in downtown Manhattan, Sarge’s is able to deliver below 14th street in Manhattan. This delivery radius is nearly impossible from the restaurant’s physical location.

“[Ghost kitchens] allow for businesses to grow in a fashion that requires less capital and less financial risk,” said Jim Collins, CEO of California-based Kitchen United, during the hearing.

Both facilities operate under a similar model. The restaurant operator pays a flat monthly fee and pays either 15% of every order placed through Zuul's native channel or 15% for orders that come through the brand's digital channel at Kitchen United.

“I started Kitchen United because I was seeing the impact of consumer delivery and wanted to create a better solution to meet rising consumer demand,” said Collins.

CBRE Research estimates that a ghost kitchen can cost as little as $20,000 to open compared to the millions it costs to open a brick-and-mortar restaurant in New York City.

Ghost kitchens worry traditional restaurants, who think these facilities give an unfair advantage to businesses because they pay in less overhead. Additionally, restaurants that operate without a storefront aren’t subjected to the same permitting processes as brick-and-mortar restaurants.

Another concern for these restaurants and for chairman Gjonaj is that ghost kitchens will drive out local independent businesses. A subject Collins was eager to respond to.

Local restaurants may be gaining access to these shared kitchens, but Gjonaj is also worried about the bustling workforce in the city. There are about 27,000 restaurants in the city that employ over 270,000 New Yorkers. Gjonaj is thinking about job loss.

The committee also brought up another matter—a lack of regulation.

The New York City health department is known for a rating system that includes letter grades displayed on the front of each restaurant.

If there’s a violation in a shared space, such as a corridor all restaurants use, who gets the violation?

The owner of the lease, New York City Health Department official Corinne Schiff said. She is the Deputy Commissioner for the Division of Environmental Health for New York City.

In this case, the lease owner would be Zuul or Kitchen United or their competitors. But these ghost kitchen operators are not rated on the alphabetical scale in the same way as restaurants. These facilities have health ratings don’t affect the restaurants inside the ghost kitchen, meaning there could be violations that consumers don’t know about.

“If you’re going to operate a shared facility, there should be shared responsibility,” said Gjonaj.

Schiff struggled to explain the process and admitted to a “lack of transparency.”

Gjonaj and the committee were unsatisfied.

While an immediate resolution wasn’t clear, the committee said it is set to announce its first set of legislation governing food delivery platforms.

The pricing structures of both Zuul and Kitchen United have been corrected.
0 comments
Hide comments
Related
Sponsored