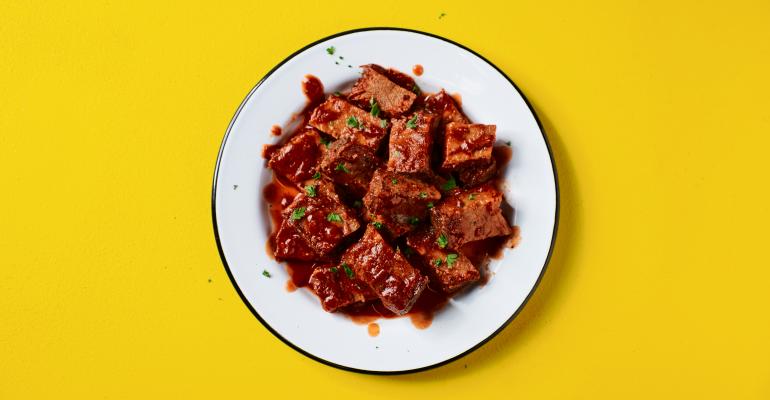 Virtual restaurant brands have the potential to generate incremental revenues and profits for operators, but only if the costs involved in producing the additional menus can be minimized.

As consumer demand for delivery escalated during the COVID-19 pandemic, many brick-and-mortar restaurants found that adding online-only brands was a lifesaver. These virtual concepts helped compensate for the loss of in-house dining, and operators say they expect them to continue to provide a sales boost amid ongoing consumer interest in off-premises dining.

Virtual-brand creators have sought to minimize the investment required to add their concepts to existing kitchens, although some have found that these concepts have been so successful that they warrant the additional spending.

Dog Haus, for example, enjoyed a strong sales increase from the addition of a suite of virtual, delivery-only concepts created in-house, called The Absolute Brands. These brands include burger, fried chicken, plant-based and burrito concepts that leverage the equipment and, for the most part, the ingredients that Dog Haus already offered through its fast-causal brick-and-mortar concept focused on gourmet hot dogs, sausages, burgers and chicken sandwiches.

“I don't think we anticipated how successful it would be,” said Hagop Giragossian, cofounder of Pasadena, Calif.-based Dog Haus, of the company’s virtual brand portfolio.

The company had begun testing its virtual brands in 2019 and early 2020, before the pandemic forced restaurants to rapidly transition to an off-premises-based model. When the pandemic hit, Dog Haus was well-prepared to begin offering the new, delivery-only brands to its franchisees to help them drive sales, Giragossian said.

Now that the chain has had a year of experience implementing the concepts, it is rolling out some modifications to its kitchens based on feedback from its operators and its own observations.

The demand for both fryer capacity and flat-top grill space have increased with the addition of the new brands, Giragossian said, which is leading the company to add larger flat-top grills and additional, more efficient fryers that are designed to recover their cooking temperatures faster to help improve throughput. That’s especially important given that the fried chicken and wing concepts are now a part of its virtual offerings, in addition to the french fries and other fried sides that accompany them.

Dog Haus is also reconfiguring the kitchen so that the fry station and grill station face each other, giving each more room to operate. They will both feed down to the production area, which remains unchanged.

“With all that frying that's being done, we're trying to give that person a little more help,” said Giragossian.

Storage also became an issue amid the increased volumes, he said, noting that the company is working on solving for that with more frequent deliveries and additional cold-storage capacity. 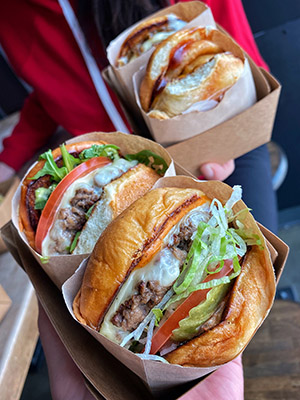 Photo: Dog Haus enjoyed a strong sales increase from the addition of a suite of virtual concepts.

As the company makes modifications to accommodate the success of its virtual brands, however, it remains focused on the preservation of the integrity of its core brick-and-mortar concept, Giragossian said.

“The reason for the virtual concepts was to hopefully bolster the business, but at the same time to be able to be flexible enough to not affect Dog Haus,” he said. “That's our No. 1, main concern. What's the best for Dog Haus? And what's the best for the customer that was kind enough to decide to get in their car and drive to our store and walk in there?”

“It was very intentional in the way we built the menu,” said Seth Cohen, cofounder of Sweetfin. “It was all about how we can use a lot of the same ingredients, prep and operational know-how to create a secondary brand.”

The only changes that Cohen foresees include signage to help delivery drivers identify the location for picking up orders — an aspect of operating virtual brands that other operators have also cited as a challenge. Some operators are considering adding separate areas outside the restaurant for delivery drivers, for example, or adding drive-thru windows specifically for third-party delivery pickup.

“Finding creative ways to do signage is something we may or may not invest in,” Cohen said.

Sweetfin’s model in some ways represents an ideal for the industry, according to companies that offer virtual brands. It allows Sweetfin to reach a specific target audience online — consumers interested in the delivery of plant-based prepared foods — while at the same time operating within the core company’s existing kitchen configuration.

“A core tenet of our philosophy is that the host kitchen should not have to spend any capital,” said Rishi Nigam, cofounder and CEO of Franklin Junction, which serves as a matchmaker between concepts seeking to grow as virtual brands and host restaurants that are seeking to add incremental revenues. Its roster of virtual brands, all of which have a brick-and-mortar presence, include Nathan’s Famous, Arthur Treacher’s, The Captain’s Boil, Wing Depot and others.

“Whatever equipment they currently have that we evaluate as being available, we will only match them with a brand that uses that equipment,” said Nigam. “We are not going back to them with another brand and telling them, ‘This brand would do well for you, but you have to go out and buy two additional fryers.’”

Many of the full-service host restaurants the company works with, such as Frisch’s, already have extensive menus and fully outfitted kitchens, so equipment is not an issue, he said.

Franklin Junction has worked with some small- to mid-sized chains, however, that have been willing to invest in additional equipment in order to host virtual brands because they see the potential return on their investment.

For most operators, adding virtual brands to their existing kitchens is not much different from producing seasonal or limited-time specials, Nigam said.

“There’s certainly coordination that has to happen — you are introducing some new ingredients and new procedures and new order streams into the kitchen that do not currently exist, but overall it’s pretty seamless,” he said.

Franklin Junction considers the “sweet spot” to be three virtual brands per restaurant, but some locations are able to generate significant incremental sales from a single virtual brand and might not be interested in adding more than that, Nigam said.

Similarly, virtual-brand provider Nextbite also evaluates the kitchens of its potential restaurant hosts to ensure that they have the right equipment in place, and in some cases works with them to a degree if they don’t.

Some smaller operators in particular could be constrained in how much additional volume they can add onto their existing kitchens, but Nextbite seeks to determine if there’s any way that existing equipment can be used, said Daniel Carpenter, VP of the food experience at Nextbite.

He noted that installing new equipment not only requires an upfront investment, but it also often entails ongoing maintenance and other expenses.

“We are trying to be incremental to their existing operations,” he said. 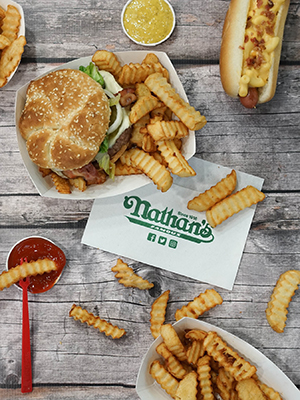 Photo: Nathan’s Famous works with Franklin Junction, which serves as a matchmaker between concepts seeking to grow as virtual brands and host restaurants that want to add incremental revenues.

Nextbite has helped operators find some work-arounds, such as modifying a traditional range top with a plaque to create a flat-top grill, for example. “We do apply quite a bit of our culinary knowledge with our partners, and get together with them to problem-solve,” Carpenter said.

Some kitchen configurations simply do not allow for significant modifications, however, such as those with limited rangehood space that would be required to meet local fire codes.

Also, while Nextbite is willing to allow some small tweaks to its virtual brand menus to accommodate specific operator needs, the quality and consistency of the brands are important to their success, Carpenter said. Prepared dishes — especially entrees and sides — need to look exactly like the images that are displayed in the third-party delivery apps, he said.

The company is willing to be somewhat flexible around the drink and dessert offerings, however, by allowing operators to add items that are compatible with, or that even enhance, the virtual brand. An operator might have a line of agua frescas, or a Mexican dessert item, for example, that works with Nextbite’s George Lopez Tacos, Carpenter said.

Similarly, some menu ingredients can be tweaked to accommodate a signature dipping sauce, or to adapt to religious preferences, such as substituting turkey bacon for pork bacon.