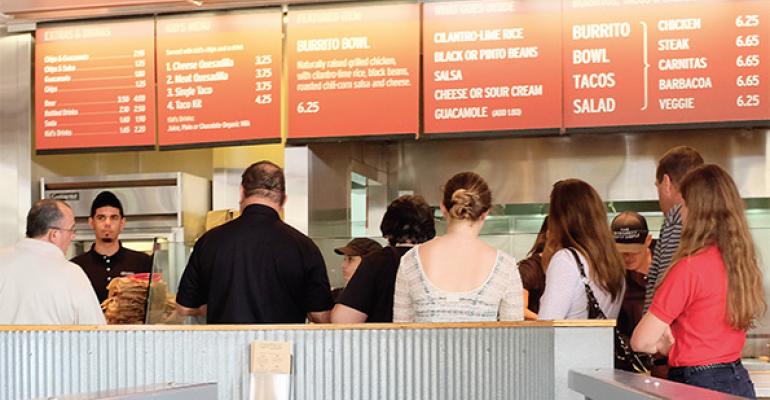 <p>Chipotle has been working to move more customers through the line efficiently during busy periods by focusing on ingredient prep, putting strong staff in key positions and using an expeditor on the line.</p>
Operations

In this special report on restaurant traffic, NRN explores the challenging traffic environment for operators, the consumer &ldquo;need states&rdquo; brands must target to succeed, and the strategies of chains winning in this market-share game.

At a time when getting more guests through the door seems a Sisyphean effort, Chipotle Mexican Grill stands out for its double-digit increases in traffic.

“What they pulled off was incredible,” said Wally Doolin, chairman and founder of TDn2K, parent to research firm Black Box Intelligence and workforce analytics tracker People Report. “To take a significant price increase and grow sales and traffic in double digits? That’s just unheard of.”

In fact, traffic is largely credited with the chain’s consistently positive same-store sales for the past 10 years.

Even more impressive is the fact that Chipotle has brought more guests into its 1,681 restaurants without the help of limited-time offers and very little in the way of new menu news — though the addition of the Sofritas braised tofu protein option last year likely generated some new or repeat trial.

So how did the Denver-based chain do it?

Steve Ells, Chipotle’s co-chief executive, points to the brand’s focus on food with integrity, which is now written into the chain’s DNA.

He also credits Chipotle’s people culture based on identifying top performers and developing them as leaders.

But Ells told Wall Street analysts earlier this year that the biggest thing the chain does to comparable-store sales is simply “doing a better job of what we do.”

The chain has been working on improving throughput and customers are moving through the line at a faster pace, especially at peak times.

Improvements focus on “four pillars of throughput:” making sure ingredients are prepped; putting best performers in the right positions during peak periods; using a “line backer” to coordinate with the kitchen and restock the line; and using expeditors to move the line smoothly when restaurants are at their busiest.

“It increases our ability to process transactions, but it also translates to better service,” he said.

Chipotle has long eschewed “jazzy advertising,” according to Jack Hartung, the chain’s chief financial officer. The company spends roughly 1.75 percent of revenue on advertising, compared with 3 percent to 5 percent for most other national chains.

However, Chipotle typically devotes a bit more to advertising during high-volume seasons. Its “Skillfully Made” campaign this summer featured food photos on billboards in certain markets.

Chipotle’s primary marketing efforts have focused on nontraditional TV spots, like the short animated films “Back to the Start,” and “The Scarecrow,” which hardly mention the brand at all, but promote the notion of fresh, more sustainable food.

The goal is to get consumers thinking about where their food comes from. And if Chipotle’s ingredients are organic, local and raised without hormones or antibiotics, the thinking is that’s where the thoughtful consumer will likely end up.

The chain had not increased prices nationally for three years, building up pricing power, before the roughly 6-percent average hike in the second quarter.

“Customers are rewarding them,” Miller said. “Not only do they have a very good model for serving food; they also look pretty good on the price-value equation while offering food quality. Those things really resonate.”

Doolin of Black Box Intelligence agreed, saying Chipotle is in “rarified air” with its “beautiful, simple menu and execution of that menu.”

It’s easier to grow traffic in the fast-casual segment, which is growing largely at the expense of casual dining and quick service, he noted.

Arnold, however, insists that Chipotle is not out to steal market share from other chains.

“We focus on providing a really compelling restaurant experience in a way that allows us to earn people’s visits,” he said.